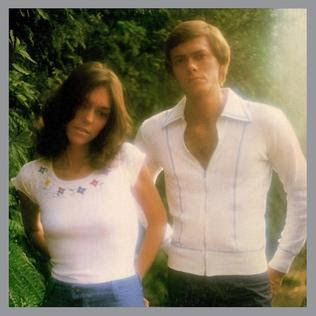 “As we eye
The blue horizon’s bend
Earth and sky
Appear to meet and end
But it’s merely an illusion
Like your heart and mine
There is no sweet conclusion”
(Irving Kahal and Sammy Fain, “I Can Dream Can’t I,” 1937)

Neither of them appear especially happy on the deliberately over-exposed cover photo – Karen is doing her best to pretend the camera isn’t there - and despite the presence of a song entitled “Happy,” this is far from a happy record. In contrast to the Bay City Rollers, and the chirpy songs Paul McCartney wrote for his kids, this is also not an album for the young; “Please Mr Postman” was already fourteen years old, and it had been a quarter of a century since the Andrews Sisters had been at number one on Billboard with “I Can Dream Can’t I.”

One could therefore superficially dismiss Horizon as yet another symptom of the increasing shift in the albums market towards an older, more conservative demographic. But even if the Carpenters had made the record for no other reason than it was time to make a new album, there is something else going on here that the above does not quite explain. Put together as a concept album, mimicking the progress of a day from dawn to dusk (“Aurora” and “Eventide” are different versions of the same tune), there are songs about gambling (“Desperado,” “Solitaire,” “Happy”) but mostly songs about waiting for something - anything - to happen; waiting for the postman to deliver a letter, or dithering over whether to leave or stay with her lover, the ageing cowboy waiting for a miracle to come, the lonely man pretending no miracle will ever come.

With “Aurora” a new day dawns, and the echoes of sadness die away, or are hoped to die away (for this album never escapes the cloud of sadness which casts a huge, enveloping pall); “Only Yesterday” with its white bread Spectorisms (including surprisingly forceful drumming from Jim Gordon) tries its best to pretend it’s liberated (the opening line goes “After long enough of being alone” – already she is trying too hard), it never quite convinces; nor does the very similarly orchestrated Marvelettes cover, with Karen on drums and good solos from Bob Messenger’s tenor and Tony Peluso’s guitar. Both of these can be traced back to the oldies medley on Now And Then bookended by “Yesterday Once More” and share the foreknowledge that the past can never be reattained – on both, castanets rattle like buried snakes, and bells toll. “Desperado” doesn’t approach the barren poignancy of the Langley Schools Music Project reading and makes no more sense of the song’s confused poker analogy, but in the “hunger” of “Your pain and your hunger,” Karen’s voice cracks for the first time.

It cracks several more times throughout the epic reading of “I Can Dream Can’t I,” the record’s deliberate centrepiece; for instance, the “belong” of “You’ll never belong to me,” the “disillusion” of “There’s much disillusion there,” the penultimate “dream,” the second “sad affair” of “My heart is a sad affair.” Above all, Karen seizes and sits on the “conclusion” of the song’s prelude quoted at the top of this piece, and that prelude seems to me the cynosure of the record, the point where fantasy and reality meet to create a horizon. Billy May, then in his late fifties, was prevailed upon to provide an arrangement (here co-credited with Richard), and treats it as he would any Sinatra ballad; quiet rhythm rising to meet strings, a Dorsey-echoing trombone chorale, a wandering Pete Jolly piano solo, and a strings/harp coda to end. If only Richard had resisted the temptation to harmonise with Karen in the song’s closing ninety seconds – presumably intending an Andrews Sisters pastiche – this would have stood as one of Karen’s great solo performances; as it stands, it is one of the great Carpenters records, and also one of the most unnerving.

Side two commences with “Solitaire,” a song Karen didn’t particularly like, and despite its good moments – Joe Osborn’s initially inventive bass, Gordon’s increasingly rhetorical drumming, a particularly emotional and committed second verse vocal – it doesn’t quite work; the string arrangement is too slushy, and as a performance the song compares unfavourably with (in Britain at least) Andy Williams’ more famous reading (a top five hit here in early ’74) due to different verse lyrics but mostly to Karen’s obligation to sing the song in the third person (“And keeping to himself/He plays the game”), which necessarily places some emotional distance, as opposed to Williams’ first person delivery (his version works because he is able to convey his inner pain; you never doubt that he is singing about, and to, himself). Meanwhile, “Happy” isn’t a bad song per se but the listener remains unconvinced about any happiness, a feeling not dispelled by the strange Moog solo and the even stranger one hand clapping to fade.

By now the light of the afternoon is beginning to usher in the uncertainty of twilight, and the already dark mood grows even darker. John Bettis considers “(I’m Caught Between) Goodbye And I Love You” his best collaboration with Richard, but despite the moderately inventive, steel guitar-dominant arrangement and a fine vocal by Karen (including a very bleakly delivered second verse: “Then I may have to let you go/If only to survive”), the song suffers from a weak chorus and generally underpowered playing.

The song, however, does set the stage for the remarkable “Love Me For What I Am.” Ostensibly a variant on the old “You’ve Lost That Lovin’ Feelin’” template (“You’re always finding something/Is wrong in what I do”), albeit with the occasional phased guitar solo, the chorus sees Karen staring straight through the fourth wall, at her brother, at her record company – at her audience, especially – and so is worth quoting in full:

“You’ve got to love me for what I am/For simply being me/Don’t love me for what you intend or hope that I will be/And if you’re only using me to feed your fantasy/You’re really not in love/So let me go – I must be free.”

This is strong stuff, and although Bowie or Patti Smith could\have come up with these words, I doubt whether they could have poured as much conviction into their performance as Karen does; she is tearing down the cosy middle-of-the-road façade, demanding to be taken seriously – yet still caring enough to deliver that final, tender, pleading “free.” Walking a bridge between the Carly Simon of “That’s The Way I’ve Always Heard It Should Be” and the Aimee Mann of I’m With Stupid, this is one of the key feminist songs of its decade, and a palpable declaration of principles.

And so the day ends, with the ghostly chord changes of “Eventide”; whereas in the morning she walks down an alleyway, she returns walking up an avenue. And yet this is hardly catharsis: “Lying under barren skies,” “Weary to be home again”; these are not the warm words of a returned spirit, and somewhere, out beyond the realm of the palpable:

She is aware of the existence of eternity and does not fully turn her back on it. If Horizon is one of the bleakest albums I have covered in some time, it is also one of the most satisfying of albums; it yearns to escape the known Carpenters straitjacket, and as a discrete whole makes perfect architectural and emotional sense. In the USA it proved too much to take, becoming their first album to miss the Top 10 after five straight hits, but here it stayed on the chart for fully six months, and in its combination of emotional limbo and subtle experimentation, perhaps a quote from another, not dissimilar, 1975 album might be in order:

“I’ve been down the road and I’ve come back
Lonesome whistle on the railroad track
Ain’t got nothing on those feelings that I had”
(Neil Young, “Mellow My Mind,” 1975)
Posted by Marcello Carlin at 16:46