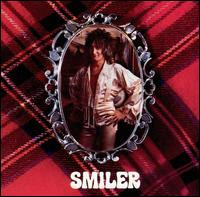 As the game became bigger, so the music diminished. Every Picture was a bunch of guys in a small but happily crowded room, swapping stories and feelings; Dull Moment was a slightly larger group of people in the mouth of a goal, and Smiler is a pub lock-in (the Prince of Wales pub in Holland Park, to be exact). The old faces (and Faces) are back, perhaps with too many new ones added, but there is no disguising that the singer, despite his continued, matey, now faux self-deprecating liner notes, is no longer existing on rice and beans and is a multimillionaire (or soon on his way to becoming one). A certain distance is growing, and along with it comes a similar degree of carelessness, and not the joyous kind.

Smiler was Stewart’s last album for Mercury (and held back for several months because of contractual dispute between Mercury and Warner Brothers), and the last of his “British” albums, and so, despite there being nothing about goodbyes in the packaging, there is definitely a sense of something ending, as in falling to bits rather than careful resolution, not that the latter was what the early seventies Stewart was ever about. Take it on its surface and it’s a fine, drunken fall-about of a record, the kind of louche, fuck-non-giving record which Primal Scream would love to be able to produce (but possess too much self-consciousness and history to do so). But peer a little closer and the exuberance is forced, the juxtapositions of loose playing and ultra-professional backing vocals and horn/string charts too ill-fitting. “Sailor,” for instance, flays like a ship flung between two icebergs; a T Rexy stomp (complete with possibly speeded-up backing vocals) and a barely controlled wind-formed monument of impassibility; pianist Pete Sears gives up keeping up and settles for Taylorish forearms to the upper keyboard, and the whole thing blows itself out into a free passage for tenor, guitar, organ and bass, Stewart meanwhile shouting exuberance, or confused instructions. Few tracks have controlled beginnings or endings; Berry’s “Sweet Little Rock ‘N’ Roller” begins like the end of Pet Sounds, with dog barks, and some noodling improv from Ronnie Wood which eventually unfolds into the song – certainly this track contains the album’s most creative rock playing, with drums and guitars impressively managing to criss-cross and maintain two different tempi at once, vigorous enough to ignore the probability that twenty-nine-year-old Rod is a little too old to be slavering over nineteen-year-old girls any more.

Everybody involved is just trying too hard and becoming exhausted as a result; but then maybe the formula itself was close to exhaustion. “Farewell” tries for the old “Maggie May” magic, complete with Martin Quittenton’s acoustic guitar and Ray Jackson’s mandolin, but the song simply isn’t there and its sentiments standard and banal; despite being a comfortable top ten hit single (#7 in the UK), the song has to my knowledge never been played on radio since. Indeed Dick Powell and Wood’s violin/guitar unisons become uncomfortably jagged towards song’s end and the music degenerates into disorganised busking, perhaps with a hopeful ear to John Cale (but likewise Fear or Helen Of Troy this is not).

The messiness finally becomes oppressive rather than liberating; by inviting all his friends round to the virtual pub, Stewart manages to drown out everything about himself that made him worth our attention. Elton pops up to contribute the rocker “Let Me Be Your Car” – by the sound of it, a Caribou reject – whereupon the record immediately turns into an Elton John record, with Rod reduced to distant backing vocals on his own album. Similarly the front line of Chris Barber’s Jazz Band, absent from TPL for twelve years, comes close to drowning Stewart out on “Dixie Toot.”

Elsewhere the extra voices are intrusive. Vanda and Young’s “Hard Road” – another of the album’s songs on the subject matter of leaving – tries for hangdog laxity but Ray Cooper’s bongos are far too prominent in the mix and Doreen Chanter’s “Sweet Home Alabama” background yelps obscure any intended poignancy or weariness. Like most of the rest of the record, the track thinks it’s outrocking the Stones, but isn’t. His reading of “Girl From The North Country” similarly seems disinterested; whatever closeness he once might have felt is rendered opaque by the over-miked drums, various aircraft/ambient sound effects, overzealous zigzag strings – little wonder that when he reaches the “And I never, never, never, never, never…” section he gives the impression that he wants nothing more than to retire. And the Sam Cooke medley/tribute is a shambles; not even approaching the still shocking, multiphonic, cataclysmic mash-up offered by Cooke onstage in 1963 (see Live At The Harlem Square Club, complete with approving byline by Stewart himself), the music limps into being from a strange, out-of-tempo intro, and again any spontaneity is immediately cancelled out by an absurd Chinese Opera/Radio Clyde string section – Stewart’s chatter and laughter seem pressurised, unreal. Possibly the lowest point is reached by Stewart’s well-meaning but hopeless re-genderisation of Aretha’s “Natural Woman” which is fundamentally wrong in all senses, from syntax to word flow to delivery; there isn’t the sense of shocked self-rediscovery, the justified reclaiming of one’s rights, nothing approaching catharsis (the track instead potters out of the door in an unremarkable fadeout).

The lack of direction persists. Why the harpsichord (or clavinet?) and acoustic guitar interludes? Where is the sense of any human contact with another human being? If all you want is an unregulated blowout, then Smiler is the album for you – the presence of stalwart Andy Newmark and Willie Weeks on “Let Me Be Your Car” once more implies a damn-you Sally Can’t Dance subtext (if Rod were capable of imagining one) – but offers little to touch or retain. The two tracks which stand out, as gum wrappers might stand out in a peat bog, are the closing reading of McCartney’s “Mine For Me” (a Paul-Linda co-write which McCartney himself does not seem ever to have recorded) which, although ostensibly working against the theme of leaving home (it’s all about leaving the “sweet painted ladies” behind and coming back), is set rather gloomily, as gloomily opulent as Ferry at the end of “Sunset” (if less creatively or emotionally expressed); Stewart even essays a couple of McCartney impressions (“Don’tcha know that the woman who love me…”) as a steel band approximates exotica in the background, before signing off with a resigned, knowing “Yeah, yeah, yeah”; and the other is the aforementioned “Dixie Toot,” which at least offers some sense that doing what he is doing is ridiculous (“I might even lose my trousers”); the repeated, diminishing emphases on “a good time” – beginning with the mourning that “It’s been so long since I had a good time” (and listening to Smiler, one can easily agree) and ending with the sod-it-I’m-off-to-heaven reveries of “Let’s have a good time really.” Finally he becomes more bitter, and realising the futility of all of this smoke and mirrors, signs off with a mutter: “I didn’t give a fuck/I had a good time.” Though the package attempts to emulate the feeling of all-mates-together, it is documented fact that by late 1974 the Faces (or what was left of them) hated each other, had grown tired of attempting to carry on making music together (and yet, at their death throes, they reconstituted for one last single, which may be the best thing they ever did: “You Can Make Me Dance, Sing, Or Anything…”), and that, equally tired of 93% top-rate income tax, Stewart was looking for a way out. Or perhaps just somewhere where he could be more easily heard – like in the old days, when all he had to worry about was whether to have one bar on the electric fire switched on, or both. Before, as the cover of Smiler suggests, he became another wee hairy Highlander, mocking the tourists.
Posted by Marcello Carlin at 13:57