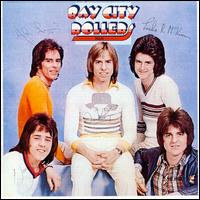 Two of the things which British pop may have lost forever to its impoverishment, aside from its sense of humour, are (a) excitable sleevenotes which manage to get the names of band members wrong (“Lesley Richard McKeown,” “Derek Longmuir…[‘s] brother Ian”) and (b) band questionnaires. No one now, not even N-Dubz, would risk losing their supposed cool answering straightforward Q&As, but the sleeve of Rollin’ has them; Eric Faulkner’s likes include “Lively Audiences” and “Alan’s Singing,” Alan Longmuir’s favourite musicians are the Carpenters, Led Zeppelin and Yes, and Woody Wood’s favourite TV shows are Top Of The Pops and Cartoon Cavalcade (Glen Michael is still around, but whither Paladin the lamp now?). The overall impression; five young, unpretentious Edinburgh lads wanting to please their audiences and themselves.

For a while, they pulled it off. The Rollers are TPL’s first wholly Scottish act, and for a time I wondered whether their first album would mark the point where the seventies finally begin, free of history. Not so easy, of course; both cover versions here are from the sixties, and the hits hark back even further. Indeed the Saxons, the Edinburgh beat group from which the Rollers arose, were in operation from the late sixties onwards; a random pin in a map brought the name change, and the recruitment of singer Nobby Clark brought minor success. They managed a top ten single in 1971 with their curiously-produced and arranged (by Jonathan King and Johnny Arthey respectively) cover of the Gentrys’ “Keep On Dancin’” and then failed to find a satisfactory follow-up. Numerous personnel changes ensued, and finally reliable (if then slightly naff) hitmakers Bill Martin and Phil Coulter were recruited to get them another hit. The first take of “Saturday Night” was unlucky not to make the Top 50, and after recording “Remember,” Clark became disillusioned and quit. Les McKeown, whose slight air of “one of these men is not like the others” worked to the group’s overall advantage, came in as replacement lead singer. In the meantime “Remember” took off and gave them a second top ten hit, but the versions featured on Rollin’ include hurriedly re-recorded McKeown vocals (unfortunately the Clark originals do not appear on the CD issue for comparison purposes).

The follow-up, “Shang A Lang,” hooked the cloakroom girls’ younger sisters, though. Easing up on the Spectorian echo, Martin and Coulter distilled the sound down to straight Glitterbeat thud with slashing guitar power chords, flowery piano triplets and buoyant harmony vocals (complete, on the singles, with a strange, strangulated voice which comes in at chorus fadeout to add a rough top harmony). The subject matter, as with the song’s successor “Summerlove Sensation,” could properly be described as saudade, nostalgia for a time Martin and Coulter might have remembered first hand but which the band and its followers almost certainly could not; the “blue suede shoes” and “doobie doo-way” of the fifties. The overall effect is something like a greyly optimistic spin on “Beach Baby” (and take it from this Glaswegian; the summer of 1974 was a bit of a washout) but the effect was insistent, and simple, and to a lot of working-class girls rather more fun than Jon Anderson or Mike Oldfield; suddenly they could dress up again, scream again, project their fantasies (the Osmonds had recently occupied the top two slots of the UK singles chart, but this was their last flourish betraying a fairly rapid decline in popularity; and furthermore the Rollers were here rather than in Salt Lake City). Pop, in the interregnum provoked by the decline of glam, was unexpectedly back.

All three singles (and “Saturday Night” to which I’ll return) are present here, in more or less their correct places, but as ever, the real fascination in Rollin’ is seeing what else they could get up to. The singles apart, there are three other Martin/Coulter compositions, the aforementioned two covers, and four band originals. The use of tympani on the singles and their suspiciously clean production may suggest the use of outside session musicians, but I think it safe to assume that everything else here is the work of the band themselves. The covers are not without their respective interests; their “Be My Baby” cannot hope to match the braised majesty of the Ronettes, as they clearly must have known, but there are some nice unexpected touches to the arrangement including a piano line lifted directly from John Cale’s “Paris 1919,” Derek Longmuir’s little tribute to Ringo’s solo on “The End” and the disturbingly solemn organ which appears in the track’s final moments. “Please Stay,” originally recorded by the Drifters, is best known here for the 1966 version by the Cryin’ Shames, almost Joe Meek’s last testament and a considerably bigger hit in Scotland and northern England than in the rest of Britain, and the echoes of ancient Edinburgh dancehalls are unmissable; McKeown, though, sings the song like a frightened auditionee, and listening to the song stumbling over itself and the many missed high notes and miscues (complete with a brief “talking” section) is rather like witnessing a Scottish male equivalent of the Shaggs, a feeling reinforced by the engaging shambling of “Jenny Gotta Dance” with its Max Wall drum hook, its echoing semi-swagger looking a year ahead to Hello’s “New York Groove” and its general air of proto-C86 indie (it shares its “angel”/”devil” divination with the group’s own “Angel Angel,” a standard rock ballad underscored by some surprisingly savage guitar chording from Faulkner).

Actually, they prove themselves capable of rather better than that, even in the unintentionally hilarious “There Goes My Baby” (their composition, not the Drifters hit) with its lyrical lift from Charlie Rich’s contemporaneous “The Most Beautiful Girl” and McKeown’s priceless Broomhouse talkover (“MA babeh…”), since the track climaxes, while we’re not looking, with a speedy conga and drums break which begs to be sampled. In terms of outstoning the Stones, the Rollers do not exactly set out to rock here, but amazingly they (with Martin and Coulter’s help) come up with a sort of Junior Choice version of “Midnight Rambler”; the playground blues strut of “Give It To Me Now” is quite unexpected in the deceptively reassuring wake of “Shang A Lang” (as I’m sure was Martin and Coulter’s intention). There are some good hissing coils of percussion; Derek’s drums rhetorically slow down and speed up, Faulkner does a fair Mick Taylor, and McKeown, bless him, does his best (he sounds most sated in the unlikely phrase: “Ah yes indeed”) even with words such as “Shim-sham-sham-a-ram/Baby I’m a ram” to negotiate.

Moreover, on their two self-penned acoustic forays, the Rollers find themselves a potentially promising direction; both “Just A Little Love” and “Ain’t It Strange” are thoroughly agreeable CSNY/America-type canters; indeed it is hard to listen to the arching bass, delicate conga counterpoint and tremulous lead vocal of “Just A Little Love” and not think of Belle and Sebastian; had this been a Mellow Candle B-side from 1970 I am sure it would long since have enjoyed a hallowed reputation (and Johnnie Walker might have played it). Likewise, “Ain’t It Strange” is a more than decent Rod Stewart pastiche, together with a violin solo from Faulkner himself, meandering mandolin (also Faulkner), a doorbell ringing at the sight of the word “doorbell”; Stewart could have done worse than cover the song himself.

Rollin’, finally, is the sound of a band trying to find their own voice while having to contend with the inconvenience of being the next Beatles (or T Rex, or David Cassidy, or…). “Saturday Night,” however, is rather more than that; a polished-up mix eventually went to number one on Billboard (in time for Christmas 1975) but this “original” take (i.e. with McKeown’s vocal rather than Clark’s) is really not that different, apart from bearing a punchier, tougher mix; the chants and accompanying descending guitar chords are irresistible, McKeown’s accent (“date,” “wait”) completely charming, the power pop organ considerably ahead of its time, the cobbled-together lyric (“the good ol’ rock and roll roadshow” indeed!) falling into perfect place. And in its dynamics and confidence of attack, it’s easy to see how this managed to inspire the Ramones and the younger Cobain and Love (and there’s a good dollop of G Glitter influence too, “Leader Of The Gang” most notably); here, kids, is a way out. What’s Les McKeown’s ambition? “To go to the moon.” Who could deny such bonnie chutzpah?
Posted by Marcello Carlin at 15:40