Rick WAKEMAN: Journey To The Centre Of The Earth 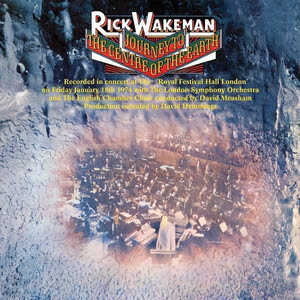 There's a quote from a brief Q&A interview with Gilbert O'Sullivan in Uncut magazine a few years ago which has stuck with me: "Between '67 and '77, originality was rife" - the implication being that the advent of punk meant closing down more doors than it opened. Suddenly everything was absolute, year zero, black and white, and so forth, and so mavericks, major or minor, who didn't quite fit in with either camp, or who didn't bear huge metaphorical "I AM A RADICAL" postcards tied around their necks, tended to get conveyed to the reject bin. It'a also interesting that while I sat around thinking what to write about this entry, my friend Mark Sinker posted these highly pertinent comments about the small, mobile, intelligent Victorian working-class unit John Martin, and I think he's got it just about right.

Dinosaurs indeed, and so it was Rick Wakeman's fate, at least for a while, to be condemned as one; yet listening to his Journey now raises the question of how anybody could rationally (or irrationally) conceive of it as representing any kind of an enemy*. Rather it speaks to me of modest, maybe slightly foolish but ultimately harmless dreams trampled over in the snotpush of "progress," even though the record and event remain one of the cornerstones of where British progressive rock had progressed.

(*Semi-digression: This doesn't even begin to mask the hypocrisy at work in much of the year zero ground pseudo-razing; remember that Keith Levene was at the time of Topographic working as a roadie for Yes, and various stock Steve Howe tropes turn up surprisingly frequently in early PiL work. In fact I was struck, while listening to an Old Grey Whistle Test compilation on Radio 2 last week (and thinking about Wakeman and Journey) how, in terms of musical approach and dynamics, there really was very little to choose from between Steve Hackett's "Los Endos" and PiL's "Careering"; both clearly sculpted from the same block - but of course in 1979 what mattered was the context which contributed to making Metal Box one of the albums for my own desert island.)

That Wakeman sounds infinitely more at ease here than on Topographic indicates in itself that Journey was a pet project long in his mind; he'd been thinking about doing it since 1971, and even though he had in the interim scored a major solo hit with his The Six Wives Of Henry VIII project, the British arm of A&M remained sceptical about its chances. No, it's too expensive to do in the studio; fine, I'll record it live (although some sequences, including parts of David Hemmings' narration, subsequently had to be redone in the studio for various technical reasons). Can't you get better-known musicians to play the rock parts; no, these are people I have known and hung out with since the scuffling days of the late sixties, they are the musicians best able to play this music, and I want this to be perceived as a piece of music rather than a superstar jam. OK, but we're still looking at forty grand - you'll have to put up some of your own money; look, whatever I need to do, I'll do it. Call this commercial? We're not going to promote it; I've spoken to Jerry Moss in the States and he says PROMOTE it.

And, of course, Wakeman was right every step of the way; the record sold millions around the world and the green light was given for this other idea he had involving King Arthur, and some ice. Absurd? More idealistic than absurd, I'd say; Wakeman had played on the all-star orchestral version of Tommy with David Measham, the LSO, the English Chamber Choir and Wil Malone's arrangements, and (with some help from Lou Reizner) convinced all relevant parties to embark on thie next adventure. Having just negotiated the challenging bends of Ornette Coleman's Skies Of America, Measham's LSO was fully equipped to deal with anything thrown at it, and their performance on Journey is technically faultless.

Listening to Journey over thirty-seven years later, my general feelings are those of simple pleasure mixed with some melancholy, for the record is as much of a part of the lost treasure world of catch-all/embrace-all of its time as Centipede's Septober Energy or even Cardew's The Great Learning (and it cannot be a coincidence that Dick Whitbread's artwork for Frames, the great 1978 masterpiece by Keith Tippett's Ark, takes its cue almost directly from Michael Wade's work here), although ostensibly there is little "radical" about the work.

Instead, Journey is that most unexpected but most welcome of 1974 things (at least to boys of my age, or slightly older), a rattling good yarn. It came exactly a century after the publication of Jules Verne's original book, which is pretty heavily condensed here by Hemmings' velvety narrator (Richard Harris was the original choice for narrator, and was keen, though was otherwise engaged at the time of the recording; Hemmings, just eight years down the line from Blow-Up, does the story as an amiable uncle with that park still festering at the back of his mind). Tbe book is perhaps more interesting for what it implies than what it tells; it is only partly an adventure story, in greater part a disguised, if digestible, history of the evolution of man, and in equal part a long digression about the importance of talk - much of the book is occupied by lengthy, winding discussions about geological speculation, and if nearly everything that is talked about has since been scientifically disproved, that is almost beside the point; there is no real reason why Lidinbrook and Adl should embark on this trip (there are no women present) other than to speculate, fulfill or surpass notions and schemes concerning giant mushrooms, battling porpoises and sea-turtles. They get sucked into one volcano in Iceland and get flung out on the slope of "the frightening Mount Etna," and somehow that is it; some commentators have speculated on the book as a pretext for exploring the old ego-versus-id inner battle, but the remarkable thing about both book and record is the complete absence of side in either; nowhere in Wakeman's Journey does one think about their trip as being anything but a physical trip, and while there may be merit in thinking about the brown, dull stuff that fills the centre of the Earth and Britain in 1974 - and the irony of one acting as an escape from the other - the record does exactly what it says in its Disneyland Records-type sleeve.

There is probably little need to examine the music in depth; it begins with heroic Richard Strauss French horns and Moog spelling out the work's main musical motif before settling down to become a paradigm of the kind of brooding, battle-anticipating soundtrack work that would many decades later - Lord Of The Rings, Harry Potter, etc. - become lingua franca. Then Ashley Holt sings a tremulous song (the mood, perhaps logically, predicates mid-seventies American AoR pop, most pressingly "Moonlight Feels Right" by Starbuck) and suddenly, and quite unexpectedly, we are flip-flopped into Air's Moon Safari with limpid electric piano carefully traced by Malone's strings. The beat steps up to Lemon Jelly level (under Hemmings' first narrative sequence) before choir and trumpets turn the mood medieval. A cyclical vibraphone line floats under Hemmings, giving way to some Moog spider jiving wherein we are abruptly reminded that this is 1974. Plateaus of strings and woodwind cast their shadow across this picture like a slightly irritable raincloud; there are not only hints of the overture to The Lexcion Of Love here but also an unexpected glance in the direction of the later stages of the Four Seasons' Genuine Imitatioon Life Gazette. A dialogue between Wakeman's Moog and French horns introduces some mild discordance, leading into a hallucinatory drone under Hemmings' "Voices! Voices!!"

Strings cascade down into - of all things - a funky Stevie Wonder-type clavinet workout (this being the commencement of the "Recollection" sequence) leading to a long guitar solo by Mike Egan. Here Malone's strings come into their own; sinister, bitonal, cutting out from beneath (as they would seventeen years hence on "Unfinished Sympathy"), before dropping out entirely to leave the choir to chat with Wakeman's clavinet before Wonderful World Of Disney harp and flutes make their entrance. The track's central song has a lounge mood, and its frequent diversion into unexpected harmonies makes me wish Billy MacKenzie had sung it (Holt is excellent, however; very much out of the trembling Colin Blunstone school of vulnerable). Electric piano argues with 'celli and basses for awhile before hissing wind effects take us into "The Battle." Wakemsn's clavinet riff under Hemmings' "World within a world" echoes "Bennie And The Jets," before the choir ushers us back into 1974. "Save me!" shriek Holt and fellow singer Garry Pickford-Hopkins against the stoic choir, and an effective air of tension is built up, though slightly dissipated by Barney James' slightly too eager drumming.

Everything eventually breaks open into...Shaft? It's cop show theme time ("the STORM!"), perhaps denoting George Sewell in Special Branch. Again, James' drums rush the tempo a little too much, but everyone sounds as though they're having a good time, before clavinet and strings re-enter to depict the "mastodon" and the "proteus." As we move into "The Forest," the funk mood returns, the protagonists spill into one volcano and out of the other, and from nowhere we get an accelerando knees-up of Grieg's "Hall Of The Mountain King" (cop acknowledged in Wakeman's brief, breathless sleevenote). Wakeman's own Moog wobbles in underneath, like a prog octopus, and then it's time for a brassy coda, followed by a pensive strings/Moog section, and then the return of the original theme, complete with florid Rachmaninoff-via-Liberace piano curlicues, the credit-roll choir title-singing, and finally three bangs and a thunderclap of a finish, to tumultuous cheers and applause (there were visuals in the form of stage sets, clips from the 1959 James Mason/Pat Boone movie - who'd have thought Pat Boone would play such a big, if indirect, part in the development of progressive rock? - and so on). As a piece of amiable/crazily ambitious entertainment it more than does its job, and one of my greatest regrets is how little room there would be for such a manoeuvre in today's zipped-up, neatly-demographised world. An enemy? Only to our own shameful preconceptions.
Posted by Marcello Carlin at 13:38