Perry COMO: And I Love You So 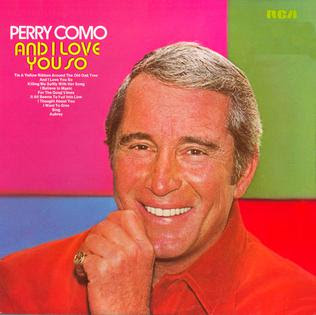 Track listing: And I Love You So/Killing Me Softly With Her Song/For The Good Times/Aubrey/Sing/I Want To Give (Ahora Que Soy Libre)/Tie A Yellow Ribbon Round The Ole Oak Tree/I Thought About You/It All Seems To Fall Into Line/I Believe In Music

Though recorded in Nashville and produced by Chet Atkins, who also provides excellent lead guitar throughout, this isn't really a country album, but there are indications that someone was trying to do something interesting with, or exploit otherwise hidden emotions in, Como. It isn't quite Perry Sings The Great Hits Of Today, although the song choices are for the most part not obvious or hackneyed, and I have to be careful not to claim this to be an MoR equivalent of Grievous Angel. However, the seeming lack of adventure and surfeit of contentment in Como are both superficial and misleading factors, and this collection for the most part finds him, of the surviving great Italian-American balladeers, far more comfortable with the then-present than Dean Martin (who by now had almost given up on recording, essaying a reticent collection of twenties and thirties songs which Reprise couldn't find it in themselves to put out until 1978), Sinatra (on the comeback trail with Ol' Blue Eyes Is Back, now with a sardonic and resentful roughness in his voice which often led to an unwholesome sense of superiority in his performance, the winning vulnerability now almost entirely absent) or Tony Bennett (who indeed in 1970 did record a collection entitled Tony Sings The Great Hits Of Today! under pressure from CBS, from which he almost immediately recoiled and returned to jazz).

Part of the clue as to why this should happen may lie with one of the two arrangers engaged on the record; respected Nashville veteran Cam Mullins orchestrated four of the selections (including the title track), but the remaining six were done under the direction of Bergen White. The latter was by this time well into an illustrious Nashville career, but had (also in 1970) recorded the extraordinary collection For Women Only (for contemporaneous developments in American avant-MoR, see also records such as Van Dyke Parks' Song Cycle, Richard Harris and Jimmy Webb's The Yard Went On Forever, Randy Newman's 12 Songs, Lou Christie's Paint America Love, early Nilsson passim, etc.) featuring elaborate internal dialogues between voice and orchestra such as "Let Me Stay Awhile" and "If It's Not Asking Too Much," even venturing into murder ballad territory with "The Bird Song." The experiment was not repeated, but much of its emotion must have stayed with White; compare, for instance, For Women Only's treatment of David Gates' song "Gone Again" with Como's reading of Gates' "Aubrey" here; in both performances, the strings (and in Como's case the flute) do not quite let the singer rest, rather compel the singer to dig deeper into his possibly self-inflicted grief. This Como does - with some inevitable reminders of Scott Walker - with subtle aplomb; note how each verse climaxes in a vaguely despondent, wordless hum. "Aubrey," first heard on Bread's Guitar Man album in 1972, is a complex song, worrying around the notion of a lost, or perhaps non-existent, love, and Como approaches its self-questioning with considerable emotional restraint; his resigned coupling of "moon" with "but where was June?," his slow emphasis on the "came" of "It never came around."

This was bold territory in which to place Como, and it is possible that his absolute, unshakable but relaxed command and self-confidence perhaps work against the record's effectiveness, but this should be placed against the attempts of White and Mullins to coax him gently out of his comfort zone. In this setting one has to imagine Como with suicidal ideations, or having just come out of prison, or engaging in one-night stands, or being a shit, and since none of these is imaginable in Como's case - you cannot even picture him stealing an apple from the grocer's box aged four - the record does sometimes lend itself towards hotel lobby blandness, and in one case worse; White's "Tie A Yellow Ribbon" is an exhausted miscalculation, as though both singer and arranger realised that nothing could be done with this song, thus the reversions to cliche (the Terry And June flute and muted trumpet unisons) and the absence of destination in a song about travelling back home; the crucial "whole damn bus is cheering" is rendered as merely another stop on the endless treadmill, there is no "I'm coming home" fadeout - the bus merely vanishes into the distance.

But most of the record deserves better attention. It bore two major hit singles in the UK - the title track remained in our charts for nine months, and "For The Good Times" for just over six - on the crest of a considerable revival of interest in Como's work, but neither performance is exactly reassuring. The Don McLean-penned title track, for instance, appears to purr contently on its bed of marimbas, but the song is about someone with a dark past, who has known hell and despondency, and is quietly liberated about having life and love returned to him. But Como needs to display no exhibitions of outward ecstasy; his central emphasis on the line "I'm happy that you do" expresses the hardest of won peaces. Likewise, the Kris Kristofferson song had previously been a US country number one in 1971 for Ray Price, who sings this sequel to "Help Me Make It Through The Night" with slightly bemused anxiety (he knows he's being a cad but is trying to cover it up), whereas Como approaches the extended, elegiac farewell to his temporary lover with the same rich exhaustion as the Nixon of Watergate ("...and make believe you love me one more time/For the good times") - a slow, awkwardly stately retreat from a gaze which may be from his lover, or from the uncomprehending world.

In between these twin peaks, one notes the ingenuity of following up a Don McLean song with a song written about Don McLean. White's one-note strings and backing vocals introduction begins promisingly enough, but Como cannot get comfortable with the song, and at many points one suspects that he is singing more of himself than of any muse (for instance, his "I felt all...embarrassed by the crowd"). In addition, his changes of emphasis in the choruses, where the "with her song" and "with her words" do not exist independently, and rhetorically, of the "killing me softly" but rather roll on regardless, dilutes the performance's emotion. Yet he remains capable of altering his mood with near-imperceptible subtleties, for example when he casually runs "...in all my dark despair" into the slight smile of "like I wasn't there." The cymbal which regularly and threateningly hisses, like a strayed snake, throughout the performance also suggests emotional imbalance. All in all, side one is a surprisingly turbulent (in its slowly burning manners) emotional ride, and by the time Como reaches the ebullient "Sing" with its encouragement of good over bad and happy over sad, he finds himself unable to shake off the residual sadness.

Emotions arguably magnify in the record's second half; "I Want To Give" (arranged by Mullins) may be the keynote performance. Here Como finally lets it come out (as far as he was diplomatically able to do so); his "I beg of you to listen to my heart," his plea "to make a world that cannot fall apart," complete with the Hollywood motion picture ending, suggests a tired God singing (his repeated, and increasingly desperate, "if you'd just let me"s). Thereafter he falls back into reserved mode; "I Thought About You" is not the song on Songs For Swingin' Lovers but moves Como into the unlikely arena of funk-lite, complete with a fuzzed guitar solo (possibly the closest Como ever came to rock), over which Como sings such thoughts as "Once I even thought of dyin'..."; his final "Most of alllll...IiiiiiiIII thought" is shaky and trembling; is he prepared to crack that mirror? Not quite, as it turns out; "It All Seems To Fall Into Line" is a middle-aged variant on "You've Lost That Lovin' Feelin'" and throughout the song Como patiently annotates the gradual stages of decline and collapse in the relationship with a suppressed sob which only really becomes palpable in his delivery of the song's final two lines.

Still, it is important to end each side on an attempted high, and it is significant that the album is programmed such that each side ends with a restatement of the transformative power of music in itself; Como approaches Mac Davis' "I Believe In Music" with genuine enthusiasm, over snappy electric guitar and strings (and eventually handclaps). He sings of something like salvation ("Find out what it really means to be young, rich and free!") and takes the record out on a relative high. And that is what must have appealed to its audience (the album stayed on our lists for over two years and, in a manner entirely compatible with Como's smart casual approach, slowly climbed up the chart for six months before topping it) - life then was tough and unhappy, and people were despairing, or simply bored, but the message was simple and far from plain; believe in music, agree that music is oxygen, and we'll all get by somehow. There are worse sentiments for a popular record to convey.
Posted by Marcello Carlin at 18:58