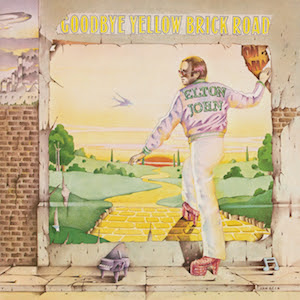 A double album wasn't really what he wanted, but he did it anyway in the hope that it might count as both of the two albums he was contractually obliged to supply to DJM each year. No dice, said Dick James, we need another one; the musician had been hoping for a rest, but his situation - that of becoming the most recognised and famous pop musician on the planet - was no longer allowing for such luxuries. On the other hand, you could view GYBR as a spilling repository of everything that Elton John knew in 1973, all that he was absorbing; work on the record began in Jamaica (following the Stones' trail) but heavy manners in Kingston (the Foreman/Frazier fight happened while he was there) compelled a return to France. Thence (via Taupin) came recollections and reconstructions of things and people he had known in his life, the old and new music coming at him like an unending stream of snowballs. Remember that the artist capable of sensitive character studies involving Marilyn Monroe and Roy Rogers also, at some point in 1973, pranced around in a 190-pound gorilla suit onstage with Iggy and the Stooges in Atlanta. Interviews of the period do not picture a particularly happy or satisfied Elton, but then the end of 1973 was not a particularly happy or satisfying time; a ruin of Nixon, oil shortages, strikes, power cuts, curtailed working weeks - a time when one wondered whether Britain wasn't really happier with ration books, that self-denial was a national pastime as well as this nation's fatal flaw. The title track of GYBE alone fit perfectly into such imperfection with its impossible yearning; if you can't imagine multimillionaire Elton forsaking penthouse for plough (and horny-backed toads in Britain?) then remember that everyone has their own version of the blues, and do not forget the Floydian poignancy of those long guitar arcs and anti-rainbow vocal harmonies. "When are you going to come down? When are you going to land?" - sometimes it seemed that everything in 1973 was a homage to Syd (and yet it was this song, of all songs, which moved the young Axl Rose to think about considering a career as a singer).

GYBE does a good job of summarising 1973's main trends; the movietoned nostalgia of David Cassidy, the glam of Bowie, the marooned mystery of Roxy, the general "where do we go from here"ness of That'll Be The Day, the politely stuck-out tongue of Alice Cooper, the inescapable shadow of the Moon. But while the record reminds us that John and Taupin remained, at least at this stage, petit maitres rather than large-scale conceptualists, the long stadium synth rock of its eleven-minute opener suggests that a grander notion had initially lodged in their minds. Done in collaboration with David Hentschel, "Funeral For A Friend" begins where Quadrophenia might have left off, complete with portentous wind howls, tolling bells and morose lead melody. The endless piano crescendos and intrusions of tympani and castanets, however, suggest a path forward, even if to (in equal parts) Bat Out Of Hell (Davey Johnstone went on to work in Meatloaf's backing band) and War Of The Worlds. Into this picture - perfect for building up anticipation for The Star's arrival on stage - John enters, whereupon the song immediately switches into a tough, fast rocker, Dee Murray and Johnstone in particularly stern form. His girl has left him, and the song careers somewhere between Sinatra's "Cottage For Sale" and "Wichita Lineman" ("You're a bluebird on a telegraph line"), running straight through "Ziggy Stardust" ("But my guitar couldn't hold you/So I split the band").

The sequence sets the tone for a long, varied and entertaining journey - but the latter is not necessarily what we get. The album's first third is more or less faultless; "Candle In The Wind" as a third-hand threnody to a fussy departed spirit works better, I think, as a candlelit bedsit meditation on youth and incipient sexuality than as an elegy of national lament; I was in Westminster Abbey, in a professional capacity, when he performed the rewrite a lifetime later, and although the emotion dormant in him was unquestionable and evident, the square-pegging felt awkward, like an old family snapshot blown up to cover the walls of a skyscraper. Here the intimacy and self-doubt are not sacrificed or exercised beyond their capacity. "Bennie And The Jets," an unexpected number one single in the USA ("We decided to put it out because it was the Number One black record in Detroit"), is the record's most defiantly futuristic and aggressive moment (but note the unusual aggression of drums, bass and piano throughout "Candle"); drawing on and expanding the Bowie/Ziggy template, the song is simultaneously all-inclusive and isolating - what are these curiously disconnected handclaps and whoops on what palpably isn't a live recording (as it turned out, the main handclap loop was sampled from Hendrix's 1970 Isle of Wight concert, with other effects from various recorded Elton gigs)? Moreover, those calls of "We'll kill the fatted calf tonight" and "Let us take ourselves along/Where we fight our parents out in the streets/To find who's right and who's wrong") go further down the path of insurrection than John or Taupin ever ventured, before or afterwards; it's a British cousin to/anticipator of Rundgren's "Just One Victory" (1973 also being the year of A Wizard/A True Star, that unparalleled unravelling and reconstructing of pop history); there is even the hint that this is really what John and Taupin wanted to do all along, kick down and get dirty. Note the odd, stinging outbursts of organ at song's end, the residual sense of futurism, and that Prince was, in 1973, fifteen. After the diversion of "This Song Has No Titles," all Mellotron melancholy with Beach Boy-ish backing vocals, "Grey Seal" is a terrific Procol Harum word-puzzle propeller with its artful, perspective-altering bridge between verse and chorus, although we still appear to be at the movies ("On the big screen they showed us a sun/But not as bright in life as the real one").

If the album had remained at this level and gone straight to "Your Sister Can't Twist," we would be looking at a pretty unassailable classic. Alas, the six songs which comprise the record's centre bring with them what I can only describe as a "Willem Dafoe moment," i.e. that point in a perfectly good film - Wild At Heart or The English Patient, say - when Dafoe arrives as a supporting character and immediately turns the movie into a glutinous mess. Worse, these songs expose John and especially Taupin's limitations. There is no need to go into any of them in detail, except to say in passing that "Jamaica Jerk-Off" was a bad idea even at the time, that "I've Seen That Movie" is an overblown overexposure of the movie motif complete with weepy guitar solo, would-be epic strings and "passionate" vocalising, notable only for being a partial musical precursor of "Sorry Seems To Be The Hardest Word," that the utterly stupid songs about prostitution and lesbianism rank among the worst and most misguided to have so far occurred in this tale (complete with unwarranted algae of pseudo-moral outrage), that I am not encouraged to find out anything more about Danny Bailey, and that Elton's vocals become angrier and less coherent with the lesser material with which he has to work. No vigilant record company boss would have spared the secateurs.

To prove what a great single album this would have been, John and Taupin rally round in the final third with noticeable regaining of quality; "Your Sister Can't Twist" is a wonderfully pseudo-dumb rocker, John's piano sounding particularly joyous, with its exhortations to "Throw away them records 'cause the blues is dead" and the Farfisa organ placing the song (essentially an "At The Hop" derivative) somewhere between Johnny and the Hurricanes, American Gladiators and Blondie. "Saturday Night," meanwhile, is Elton's most convincing straight rocker and comfortably outrocks anything on Goats Head Soup; note how the prog-rock organ is swiftly wiped out by Jerry Lee piano dips with the advent of every chorus, and Johnstone's rollercoaster guitar riff sliding perfectly into the shouty fadeout. "Social Disease" works where the albun's midriff doesn't, largely because of its effortless humour, its claps and whoops, and John's hysterical vocal, landing between Randy Newman and a particularly frisky Leo Sayer ("Dis-e-EEEEEE-eeeese!"). The closing "Harmony" unexpectedly finds John in the same place as Bryan Ferry at the end of Stranded; out there on the sea, blissfully landlocked, and not without its winks of escape ("In any case I set my own pace/By stealing the show - say hello, hello").

But "Roy Rogers" cuts the deepest, and proves that John and Taupin's talents lay in the immaculate miniature portrait rather than the sweeping gesture; in its contemporary reflections it is the mirror song to "Candle" and as an end-of-every-big-thing piece it ranks with Richard Thompson's contemporaneous "End Of The Rainbow." Here Taupin gets it absolutely right; the nine-to-five guy who knows that life has passed him by, who's too tired or insensate or trapped to change anything, who's wondering what all that promise of the sixties was for, whose only connection to life is watching the old cowboy films on TV. Weep with Johnstone's steel guitar as it drops off in agony after John sings the line "While the wife and the kids are in bed" - the hopeless Dividend Stamp greyness of late 1973 Britain is perfectly captured; this, let us not forget, is the world from which BS Johnson had just absented himself. Nothing for it but to bury oneself, in hiding from commitment, in the memories of when he wasn't required to be responsible or careful. But note the "let's shoot a hole in the moon" warning, and the "hit the hilltop" near the end, both of which lead to the nuclear siren drone which actually ends the song. The past is one thing, but the future has to live, too. In the meantime, there was another album to be recorded, another responsibility to be fulfilled. Wasn't he already nostalgic for a time when he didn't have to do so much work, when the yellow brick road was safely distant from him, up in that beckoning light?
Posted by Marcello Carlin at 11:48