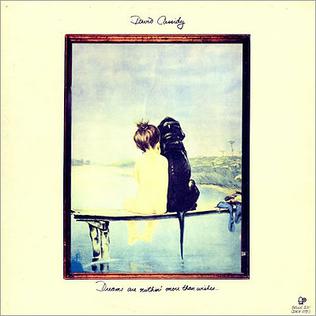 "I stand amid the roar
Of a surf-tormented shore,
And I hold within my hand
Grains of the golden sand"
(Edgar Allan Poe, "Dream Within A Dream")

"If you try you will find me
Where the sky meets the sea"
(Rodgers and Hammerstein, "Bali-Hai")

"Until we meet again kiddies it's all over now baby blue..."
(David Cassidy, from his sleevenote to Dreams Are Nuthin' More Than Wishes...)

Whatever did happen to Billy Bigelow Jnr. anyway? Well, he grew up like no one anticipated, even though it was his mother - that cautiously innocent voice which rings down from entries #2 and #4 (have we really only travelled seventeen years, or no distance at all?) - who led him into becoming famous. Famous, that is, to a point, one almost beyond bearability. By the end of 1973 The Partridge Family had been cancelled and the boy - if we can speak of this twenty-three-year-old as such - had already become half forgotten in his own home. He remarked that he felt as though he had been marketed like a packet of cornflakes. In Britain, however, he had never been more famous, and was never to be more famous; late 1973 caught him at both the peak and the end of his popularity, a situation which necessitated his being smuggled into studios in laundry baskets to do television, a live following which would end in fatality in only a few months. He wasn't, in short, happy, and the surface happiness of this record does little to conceal the abyss of despair lying beneath.

The record already seemed like a lost relic in its own time; there on the cover is David and his Dalmatian, on the rear David's head rising wetly out of the water as though already auditioning for the cover of Fourth Drawer Down, in the middle David's track-by-track sleevenote, in his own junior doctor's handwriting, complete with drawings. With the record also came a separate print, of Bruno Piglhein's 1925 painting Pals, a rather forlorn watercolour featuring a naked girl and a black Labrador, sitting side by side by a river with their backs to us. The only reason this doesn't qualify for a hauntology label is that it's difficult to see what messages the record is sending us two generations later, other than those to do with the singer's state of mind.

It is not an easy record, either, and one can only marvel at the loyalty of the fans which surely must have sent it to number one. Loosely structured as a song cycle (although it is neither Cassidy's Pepper nor his What's Going On?), the record begins with a snippet of the closing track, "Hold On Me," in which the singer makes the following observation:

"Although life is a serious game,
Was it I who played wrong?
Do I belong to the small few
Who get lost in the race
Who still seem to pretend
When their daydream ends?"

And before he can reflect any further, the record immediately sways into John Sebastian's "Daydream," the beginning of his time. Dominated by Michael Omartian's tack piano (and the musicians appearing throughout Dreams are the best Cassidy could buy; Larry Knetchel, James Burton, John Guerin, Kim Carnes, Michael McDonald, Victor Feldman and very many more besides. The music is downhome luxurious), Cassidy speaks (in his sleevenote) of first hearing the song in 1966, stuck on the Long Island Expressway in 105-degree heat - a situation more in keeping with the Lovin' Spoonful's follow-up, the pre-apocalyptic "Summer In The City"). He gets into a sort of swing but despite his deprecations (near the end he speaks "Makes. Me. Feel. So. Good") he is not quite in the realm of happy.

In "Sing Me" he goes even further back, citing Kitty Kallen's "Little Things Mean A Lot," musing about his mother "posin' like Marilyn Monroe" (thus Dreams becomes the first of two consecutive anguished number one albums to mention Monroe), his father holding him up at the beach, "Life was a joy, I never got old," followed by the crushing self-revelation that he is fated to get old, particularly when he turns four and a new baby brother arrives home (whereupon he promptly flees on his bicycle). Backing singers plead, "Take me away." Back to a life without responsibilities, without fear, without retrograde selective nostalgia.

And then it is back to "Bali-Hai" and he sounds as though he is being born; he materialises through the ocean wave effects and Feldman's ghostly vibraphone, tracing himself back to the source of his pain, that special island that once promised everything. It is an exceptional reading, and if it sounds as though we are nearing Surf's Up or even Pacific Ocean Blue territory, you wouldn't be far wrong. He snaps out of his reverie, however, as reeling bass and congas rope him into "Mae," another song about mother fixation. Here Cassidy really shows his versatility - normally his voice is breathy, microphone-close, accentuating the sibilants, not that far from, of all singers, Cliff Richard - and his rumbling "warm and tender," his repeated self-hypnotising mantras of "I need you, Mae" (waves, swimming, back to the womb, it's all here; there is even a Van-esque abrupt holler of "ALL RIGHT!" as emotional breaktime) leading into Michael Jackson-predicting mutters and gasps ("HI need! HIII need!!") which in turn wander into barking abstraction.

The improvised take on "Fever" is also extraordinary; with its Superfly bass/piano unisons, its floating vibes/percussion echoes, its use of echoes and spaces, Cassidy's own unmoored vocal ("HIIIIII LIIIIIIGHT up!" he gasps at one point) above melodramatic drums and piano, it plays like a hook-up between Isaac Hayes and George Crumb. Had it been a long-lost track by, say, Terry Callier, Norman Jay would have been on its case decades ago. A superb climax to side one, only slightly lowered by the re-reading of the old Partridge tune "Summer Days"; despite this apparently being closer to Cassidy's original vision of the song, it doesn't make the song itself anything more than mediocre (as the lumbering, mistimed key change about a third of the way in highlights).

Then, however, it's side two, and the hits: Nilsson's "The Puppy Song" is treated generously, with spring coil percussion, vaudeville washboard, the tack piano again, and hopeful (though alas uncredited) clarinet, but none of this hides the song's rather starkly alienated nature; after all, he has neither a puppy nor (to extend the dog metaphor westward, as the song does) friends, and he is merely wishing for one so that "we can stay away from crowds" and from "signs that said NO FRIENDS ALLOWED." Likewise, "Daydreamer" ruffles into view atop Michael McDonald's warm Fender Rhodes grill, and one can clearly see how the ten-year-old George Michael would have, so to speak, got it, but the unwanted oneness is still non-detachable from the singer, and just when you think the song is all over, there comes the most pregnant of pauses, followed by: "I'm...just...a..." and that "a" sounds as though he is pulling down the rest of the world with him, closing ocarina solo or no. He recovers some ground, however, on Shel Silverstein's characteristically goofy "Some Old Woman" with his soul brother parody vocal ("It's a shame...HM!...it's a PITY!," his comedy growling of "wicked and WILD!," his perfectly-timed throat-clearing). He ends up roaring "LIES!" and nowhere else on the record does he sound as though he is having such an unalloyed good time.

But then comes the closing trilogy, and Cassidy's neck bends towards tragedy. Not that you would necessarily know that from the good-time ambience of the playing - the then-unknown Kim Carnes is rightly applauded by Cassidy for her tennis-match piano on "Preyin' On My Mind" - or the determinedly lighthearted nature of the sleevenote, but "Can't Go Home Again" spells it out as dismally as The Last Picture Show; he's back, and doesn't really know why, his mama calling his name, and his mind drifts into imperfect memory (the song, composed by Cassidy with Carnes and Dave Ellingson, was originally planned as an unending list of memories, sightings and insights relating to "this boy's lost track"); the old dreams, the absences (Tom who ran the picture show is long gone), the fact that "a double-deck cone don't cost a dime no more," maybe the record's saddest reflection, the final encounter with a crying street bum (whom he remembers from boyhood) who could easily be himself - turn, turn, back into the car, back to the station, if you can, there's nothing for anyone here, and Cassidy wishes above all else that he could simply be "anyone" before the music fades into a Bob James groove of comfort. "Preyin'" continues the theme with its musings about "the lonely old man passing through your town" although, as mentioned, Carnes' piano and backing vocals do their damnedest to punch some life back into the boy.

Finally, however, there proves to be no exit, except the last one; "Hold On Me" finishes the record as it began, and its sentiments are the record's darkest with its "set myself free" and Cassidy's most emotional vocal performance - "Circle closing in on me 'til I can't seem to see," "We're alone and we're broken...now don't we need loving?" (is this still, despite everything, 1969?) - until the original refrain returns and is turned into a reluctant singalong. "Do I belong to that small few that got lost in the race..."? Fittingly, the record itself became an absence; although its only slightly less troubled predecessor Rock Me Baby is still readily available, Dreams has not survived, available only (to mirror the beginning of 1973) as an expensive and hard-to-find Japanese CD. It feels like a dream from which Cassidy is unable to escape; waking up, he finds that he is still dreaming, and that dream is stardom, nothing like he expected. But can't those sands of seconds be turned into gold? How good could his grip be - or does he gladly sink into responsibility-abolishing oblivion? Not quite, for he has survived and endured; nevertheless, this record reminds us of the pain waiting for everyone when the carousel opts to stop, or is stopped.

"Yet if hope has flown away
In a night, or in a day,
In a vision, or in none,
Is it therefore the less gone?
All that we see or seem
Is but a dream within a dream."
(Poe, op. cit.)
Posted by Marcello Carlin at 18:49