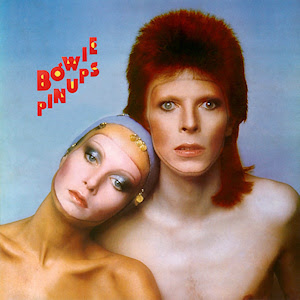 On several occasions throughout Aladdin Sane one gets the feeling that Bowie is trying to rectify the sixties, the history which by 1973 was already setting into boots of concrete. A sixties where, already, Lou Reed and Iggy Pop counted for more than anyone cared to reckon, where a furious reclamation of the Stones as improper punks could be essayed. Perhaps he felt the need to underline this mission further (if not necessarily deeper) or perhaps he was momentarily stuck for something to do after the end of Ziggy, but the reclaiming exercise attempted on Pinups speaks for elements of that decade with which I don't think too many people have still come to terms. With perhaps two or three exceptions, none of these songs in their original versions is revived on oldies radio. This is the world of flat-jawed, thuggish, nascent British R&B, a world in which many of its inhabitants felt that they were still playing jazz, bypassing the roll altogether to rock into a fairly frightening idea of the future.

Moreover, Pinups is the work of someone shut out of the epicentre by virtue of being that crucial three or four years too young; Bowie worked the clubs to some extent fronting the Lower Third and the King Bees but was always overshadowed by his elders. So Pinups is also a love letter penned by an only slightly disillusioned fan. Somebody who can't remember whether the Ricky-Tick was spelt with a "y" or an "i" is as devout a follower of his chosen movement as Thatcher must have been of Larkin's, with her "mind full of knives" misquote.

Commercially it did the business but was largely mocked by the critics; Bowie was accused of lacking passion, of applying a pop voice to R&B material beyond his ken, of ludicrously camping everything up. Yes, Bowie at his peak was always a pop looter, stealing bits of everybody's records and outfits and running off with them as though it were always Christmas. But, particularly in the dark light of the past ten days or so, Pinups offers, I feel, some of the most passionate singing Bowie has ever tried, and some of his most troubled singing, too. Van Morrison shrugs off "Here Comes The Night"; what the hell, I lost on this one, I'm a bit grouchy but there will be more nights to come. But Bowie sings it as though being booted about by a gang of baddies; against the Palais band saxophones he sounds like a wounded Lotte Lenya, screaming his hiccups, becoming gradually more and more desperate as he slowly grasps the extent of his loss. Likewise, "Everything's Alright," a top ten hit for the Mojos in 1964 but done by everyone on the circuit, sounds anything but all right; he shrieks and gurgles as pianist Mike Garson detonates any plans to turn the track into a Zeppelin prototype.

The two Yardbirds covers Bowie uses more obviously as Zep templates; on "I Wish You Would," Ronson's guitar sounds like a parody of the Jimmy Page to come, there are drunken harmonica/guitar unisons and police siren noises (thus also post-predicating "Happenings Ten Years Time Ago"), syllables exaggerated like spotlit goldfish, and the inevitable atom bomb ending. "Shapes Of Things" is a clearer seventies heavy rock adaptation ("Maybe a soul-DIAH!") although the mood is clouded by the gradual intrusion of desolate high string tones.

The pair of Pretty Things songs - they were perhaps the most thuggish of the lot - works well because they are played more or less straight, so much so that we can still see how the attack of "Rosalyn," both in rhythm and vocals, foresees Dr Feelgood and the Clash with rare acuity. But he can't quite get a grasp on the Who. With "I Can't Explain" he tries to turn '65 Pro-Plus rush into '73 glam stomp, with some rasping, ghostly sax, before flattening the song into a midtempo hard boogie crunch. Meanwhile "Anyway, Anyhow, Anywhere," a song practically impossible to cover, if purely because of the inbuilt failure of any attempt to revive the scarlet shock of the original, is handled comparatively timidly, with phased drums and Ronson working on the feedback, but only as a competent student. At a time when the Who themselves were looking back on their own history with Quadrophenia, and wondering whether to bury or incinerate it, Bowie's nods don't seem quite adequate, or diverting, enough.

"Sorrow," the hit single, is effective because of its photo-negative inversion of the ebullient horror of the Merseys' original; it suggests huge banks of emotion, with its lonesome violin and lacrimal saxophone, rather than the full-frontal brass assualt of the source, and manages both to cover and amplify some of Bowie's most heartfelt emotions on the record (even with his over-enunciated "The OWNLEY thing I ever got from you"); his overlapping "I tried to find her 'cos I tried to find her" gets to the emotional nub (look at Twiggy, the cover suggests, see what the seventies have already done to her, how the mutating waves have hardened her, made her less approachable, more like...Bowie?). Its reverse is the brutal treatment handed out to "Friday On My Mind," in late '66 a handle for the Easybeats to work off some tension and drift out of office-dictated normality, but now a strange echo of the "rabbit" running in Dark Side Of The Moon becomes palpable as Bowie cries hysterically about how the working week, The Man, is crushing, squashing, strangling his life. His "even my old man is..." disappears into a murmur but he can barely hang onto the dead man's handle of the tube train; is this, his performance seems to suggest, all that we got from the sixties to take with us into the seventies (see also, needless to say, "5:15")? More of the same, but flashier-looking? Was it all...the silent cry of every concept album...for NOTHING?

"See Emily Play" takes that idea further. Bowie does everything to the already bent song except try to put it straight again. Already the Roger Waters undulating bassline at the end of the original - which announces quietly that this is the way the Floyd are going to go, with or without the guy at the front - has taken the song over. Bowie does it over in an oafish Cockney grunt as Ronson's synths hiss and Aynsley Dunbar (man of the match; superb throughout)'s drums collapse. A harpischord tries to nudge its way in without success before being drowned by Garson's tortured free piano. Drums stumble over the chorus as though unable to find their way home. Garson alternates between John Cale plink-plinks and Antonello Salis-style random assaults. Led by the drums, a vague Indian drone feel takes over momentarily. Then everything falls to pieces - like, it is implied, the mind of Syd Barrett - as string quartets, saxophones and other noises scrabble towards a scruffy fade. The song is viewed as a ruination, a sort of psychedelic Pompeii (and of course the Floyd would play Pompeii), a sternly playful warning.

But the heart is reserved for the closing, faithful reading of Ray Davies' "Where Have All The Good Times Gone," which is performed as good, lusty hard rock. The composer's rueful nod to McCartney ("Oh! Yesterday was such an easy game for you to play/But let's face it, things are so much easier today") is retained, Bowie's true voice finally emerges, and despite the obvious comparisons with the "depression" of its own time, the performance generates hope, confidence, the idea that, at the end of "Love Reign O'Er Me," Jimmy will survive the water, the crash, the sixties, and gladly carry on into a future. Still, Pinups remains one of Bowie's darkest corners, and the first step on the Low road. Maybe its sustained scream of mercy was something that the world of oil shortages, three-day weeks and strikes needed, just to get us through to a different world.

And then, with his next album, he encouraged the end of the world.
Posted by Marcello Carlin at 18:11