LED ZEPPELIN: Houses Of The Holy 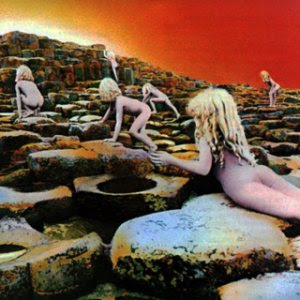 Listening to the scratchy indie jangle of "The Song Remains The Same," the unwary might have to pinch themselves that they are not listening to the Scritti Politti of 1978; the unexpected bar lines and harmonic developments almost act as a precursor to "Skank Bloc Bologna." Alternatively, listening to the easy-angled hard-verging-on-soft rock of the same song, one might discern the Heart of Dreamboat Annie - a happy sixty-first birthday to Ann Wilson, incidentally - or, listening to the oblique bass/guitar relationship and stiff-armed drumming of the song, one might sense a prediction of Ornette's Prime Time ensemble. Then again, listening to the sped-up (sounding) vocals of a furiously mixed-back Plant - towards song's end he sounds as though in receipt of helium - and the staccato harmonies in the song, one could easily predict Queen. Those unanticipated three-note basslines from Jones even foresee the Associates. The harmolodic Byrd mutation of the extended intro settles down to a swampy strut for Plant's entry, and Page is in hoedown mood, doing his best at times to turn the song into an Allman Brothers homage.

If some of these references appear fanciful (which I do not believe they are) then that underlines the multi-hued prism of influence that was the Zeppelin of 1973, even on what was once assumed to be one of their lesser records. In fact I enjoyed listening to Houses Of The Holy more than any of its three predecessors in this tale; its lightness is a salutary repose after the intensity of Four Symbols, and although it wrongfooted nearly all critics at the time of its release - what, no rockers, no anthems, what's with all this eclectic shit? - this is nearly always to the record's advantage.

At this point Zeppelin albums divided fairly reasonably between the Monoliths of Major Statements (II and IV) and divergent backwaters or detours giving them the freedom to experiment and regenerate (III and the present example). If much of Houses is dedicated to good-natured goofing around, it bears a lightness inaccessible to most of the group's peers. "The Rain Song," for instance, proceeds along much the same path as "Stairway To Heaven," yet, perhaps because it doesn't strive for effect, I find it rather more moving. Mostly, even in the "rock" sections, the mood is quiet, predominantly acoustic, albeit with Jones' Mellotron providing a useful readymade string section (with occasional atmospheric whooshes). Page works through some jazz chords and generates an atmosphere of Hawaiian lounge music, ambient and subtly laid with traps (Jones responds with a few cocktail piano tinkles). Plant sings through a simple four seasons of love analogy (though still manages to get in curveballs like "This is the mystery of the quotient" and quote Ben Jonson - "Speak to me only with your eyes" - and his "Talk Talk" as Bonham's drums nudge their way into the picture and the song turns to electricity sets a path which will ultimately lead to Spirit Of Eden). Melodically and structurally there is more than a passing resemblance to the Guess Who's 1969 US top tenner "Laughing" but "Rain" is fundamentally a very different song, far more meditative, and, when, Plant's "But I know" ushers in a hushed return to the original setting to welcome amd embrace his "...that I love you so," immensely affecting. Page's acoustic strums eventually resolve into the opening of "Over The Hills" which again demonstrates the proximity of Zeppelin's folkier rock to that of Fairport Convention (even though it gives Jones a bass solo).

But then the record loosens up and the party, such as it is, begins. "The Crunge" is a quite brilliant James Brown pastiche, Bonham's B-boy beats and even Jones' occasional harmonium-like synth bleeps providing a perfect backdrop for Plant to wreak audacious havoc over the angular 9/8 backing; again, the unwary listener may need to pinch themselves that they are not listening to 1981 post-punk funk, although Plant's deliberately ludicrous interjections - at one point paying homage to Otis by citing "Mr Pitiful" and "Respect" - seem somewhat warmer and more approachable than those of, say, James Chance. In fact Plant hams wonderfully throughout the track ("Ah, will you just excuse me," he coughs near track's end, before a Goonish dialogue about finding the bridge brings the track to a satisfactory halt). More significantly, the homage does considerably greater service to Brown's power and continuing influence (1973 was the year of the excoriating, blacker-than-Beckett The Payback) than some of his worthier white disciples, and Plant's vocal curlicues and teases also suggest a familiarity with Clinton's Parliament/Funkadelic theatre of R&B superrealism, then only just emerging into the mainstream.

"Dancing Days" provides yet more proto-No Wave angularity with Jones' organ squelches, Page's jittery guitar and Bonham's deadpan drums while Plant merrily deconstructs the love song ("I got my flower, I got my power," "You'll be my only, my one and only/Is that the way it should start?" - just how familiar was Green with this record?). The unexpected Rough Tradery of the album continues with its big hit, "D'yer Mak'er," wherein Plant croons a minimalist "Unchained Melody" variation over more scratched guitar, occasional barrelhouse piano and, above all, Bonham's cardboard dustbin of drum fills; the obvious antecedent is that of the Police - at one point Plant even sings, "Every breath I take/Every move I make" - but the energy is considerably greater and the song's essential good nature has made it last a lot longer, again, than more slavishly adherent eulogies to pre-dub JA.

"No Quarter" is the album's one nod to Epic/Future Stage Perennial but, although I think it the record's least convincing track, it does to its credit try its best to keep all of its elements within severe reserve; it bears no climactic rock-out, and while Plant's lyrics, decidedly within the Dungeons and Dragons section of the Zep oeuvre, are as silly as ever ("The winds of Thor are blowing cold"), the song perhaps relates most closely to the cover image of multiple child brother and sister crawling over the Giant's Causeway naked, not an image which would pass any contemporary board of control, in its aura of impending doom, or possibly a disguise of doom to conceal hope ("They carry news that must get through/To build a dream for me and you"), and Jones has a whale of a time with his various synthesised processors; the piano/guitar dialogues between Jones/Page are well coordinated, the build-up of the song gradual and logical. Against that, Plant's furiously phased vocal sounds a lot of the time like a subdued Ozzy Osbourne, and at fadeout he has an attack of the Barry Ryans ("I'm cold! I'm cold!").

Nevertheless, "The Ocean" - the nearest Houses comes to a "rocker" - provides a happy ending, its instantly recognisable riff rejuvenating the listener in a second (if you're wondering which Beastie Boys track sampled it, it's "She's Crafty") together with Bonham's characteristically monumental M25-building beats. Again, Plant sounds speeded-up but euphoric - somewhere between Brenda Lee and Noddy Holder - and there are nice nods to the fifties with the acappella doo-wop break midsong and the closing Fats Domino rave-up (Plant exclaiming, "C'mon, so GOOD!" at something Page plays). The song is about Plant's daughter Carmen, and the band's audience ("The Ocean" are they, and Houses Of The Holy the venues where the band had played), and although there is still an intimation of apocalypse ("Used to sing on the mountains but the mountains washed away"), we stroll away with kind hearts and generous spirit. A fabulous and unexpectedly prophetic album which may yet prove among the longest-lasting of Zeppelin records.
Posted by Marcello Carlin at 16:31