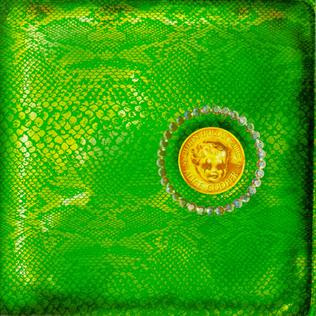 In rock, honesty and artifice are commonly held as polar opposites, even though they are almost always two sides of the commonest of coins. After all, if a performer not only owns up to the primacy of artifice, isn't he or she being as honest as they can possibly be? Either they rejoice or grieve for our secondary pleasure, or they revel in poking their ringed fingers into the fourth wall, and perhaps we as listeners or consumers feel as guilty in either case; we invest so much time and emotion in somebody who tells us that they are but a cartoon, yet how else do we treat our idols if not as abstract graven images worthy of temporary worship?

Myself, I'm not so sure; both honesty and artifice have many levels, and many of these are concurrent and interdependent. This is the first entry of what might superficially be described as American hard rock, or heavy metal, and pretty much the only American glam-rock entry (of its time, not counting manifestations in future generations), and it comes from someone who remains unapologetic about being in it for the money - Cooper, after all, was in part a protege of Frank Zappa - and being a superficial entertainer, all the mock theatrics being at strictly kindergarten level, a device to help disaffected teenage kids (almost all of them boys) get through difficult times. The billion dollar bill which came free with the original vinyl album of Babies was deliberately ambiguous in its design; an exultation at the power of what Kubrick called FUCK YOU money could bring - Alice in his counting house, reclining amidst his towers of coins - and a warning as to what untrammelled capitalism for its own sake could lead; the crowd taking their hats off to the USAF-10 warhead being towed along, as though Washington were the Kremlin.

Likewise, just because Cooper laughs and tells us that it's all a joke doesn't necessarily make it so. Artifice is, amongst other things, a useful hiding place for concealing hidden intents, and beneath and even among all the showbizzery of Babies there is a deadly serious undertow. The opening "Hello Hurray" - significantly not written by Cooper himself, but a cover of a song by Canadian Rolf Kempf - lays down his essential cards. Moving from its initial Righteous Brothers funereal pace via a distorted, slowed-down "Be My Baby" whiplash beat to an ominous, progressing march dominated by trebly synthesiser, anguished lead guitar and restless bass - the overall feeling and harmonics point directly towards Talk Talk's "Life's What You Make It" - Cooper appears, imperiously; he's about to go onstage, welcoming the dark embrace of his audience. It is clear that he's been anxiously impatient about this opening in his life ("I've been waiting so long to sing my song") and offers himself to his disciples, pulled or coaxed from the ranks of the disillusioned ("I've been thinking so long I was the only one"). But, with his repeated and increasingly frantic protestations that he is "so strong," doubt creeps in; maybe he's as weak and demolishable as his audience, but doesn't dare to tell them that openly. It's all very transitory and unstable, this perceived strength, and as a top ten single in early 1973 it was a startling betrayal of frailty, impermanence.

After that, the album settles down a bit; these days, a song called "Raped And Freezin'" would cause a slight shoulder shrug from followers of Nine Inch Nails or Agoraphobic Nosebleed, and in its own days it prompts little more reaction, a straight Stonesy rocker where Cooper amusingly partakes in some role reversal antics - he is picked up by "some old broad down from Santa Fe" who proceeds to launch herself on him, chides him for his impotence and throws him out of her car, leaving him "naked, stranded in Chihuahua," giving a Lennon-esque wail to the latter word. Following some multifocal primal screaming, the band then launches unexpectedly into a berserk "La Bamba" speedfreak romp as Cooper settles for incoherent babble. Indeed, much of Babies recalls what Lennon might have done at this time, free of constraints and commitments (i.e. a sort of Paul Lynde variation on Noddy Holder).

"Elected" was a vastly improved rewrite of "Reflected" from Cooper's 1969 debut Pretties For You (which is not a buried treasure awaiting recovery or rehabilitation) and as a pop single was an inspired blast of supercharged corn; he sings it like a Mick Jagger who's just been caught with his hand in the Watergate handwash basin, with some cheek but absolute, or absolutist, conviction; he never stops ranting, whether in the instrumental break or through the elongated brass-dominant coda (the musical star here is drummer Neal Smith with his ice-slippery rolls). The pledges are as spurious and banal as those of Number 6 in "Free For All" but Cooper knows it, swims in the relieving ecstasy that the hollowness brings. In its 45 form it was a magisterial custard pie in the face of respectability and trust, and his crowning "I DON'T CARE!" - the last coherent thing we hear from him before the song fades - reminds us why John Lydon was and is such a fan.

The title track alternates between Zeppelin/Plant parody and "Hernando's Hideaway" lounge interludes, complete with mumbles from guest vocalist Donovan, and lyrically appears to be treading the same ground as Roxy Music's contemporaneous and colder (if wiser) "In Every Dream Home, A Heartache" (inflatable doll as life-saver/late capitalist metaphor) before Smith's machine-gun drums beat the song to a dusty pulp. Meanwhile it is fitting that side one's culminating setpiece reflects Cooper's fear of going to the dentist's; "Unfinished Sweet" begins with tick-tocking bass and drums before Glen Buxton's guitar enters, progressing towards a proto-motorik groove which sounds remarkably like Neu!'s "Hallogallo" before "rock" becomes, once again, predominant. The tempo is punctuated by dentist's drill whirrs which recalls Eno's sine-wave oscillator; James Bond theme paraphrases follow before guitar and synth trills bring the song to an abrupt halt. Then we are left with a bewildering (but bewitching) passage of abstract noise, with industrial feedback drones, a wheezing bassline which floats in and out of the foreground, prior to returning to the original song, complete with Keith Richards-copping guitar riffs. A fake fadeout gives way to agonised patient groans, interspersed with a few werewolf howls. And all because the gums have got to go.

"Nice Guy," also a major hit single, is a neat turning of tables; Cooper blames the media for turning him into a demon, complaining that his neighbours and even his pastor are the real villains, slapping him away from goodness. But what does that tell us, or what is he telling us, about his relationship with his fans? He seems to relish the growl of "Mean!" at the end of the second verse, and Smith's drums collapse at song's end like a pre-built cage falling into submission. "Generation Landslide" plays like a White Album outtake, a jolly semi-acoustic pastoral romp, but Cooper uses it to nail the natural successors to Nixon's "silent majority," the baby boomers - i.e. his own generation - in the full knowledge that they will end up exactly like their parents, except less ashamed. His "la-da-da-da-daaa!"s are anti-romantic - cold rationalist, one might say - and he delivers phrases such as "pink high chairs" in a markedly proto-Lydon sneer. There is the faintest tint of "Sympathy For The Devil" to the song's swing, and a forest of harmonicas and piano ripples escorts us towards fade.

Cooper delivers "Sick Things" in slow, measured tones over distorted electro-bass and then stately brass and reeds, interrupted periodically by a clattering junkyard of guitar feedback phantom music; if that last phrase suggests, once again, Escalator Over The Hill, then Sick Things reminds me very pointedly that this album could almost be a junior school EOTH. There is a gradual build-up of huge grandeur, Buxton's guitar moving to a cleanly played lead, phased piano notes, the brass and woodwind suggesting the ship of Nixon, slowly sidling into dock. Is Cooper addressing his fans as his "things," or does he imagine himself as the immediately pre-Watergate Nixon, frantically scanning his people and reassuring himself of his total dominance? As with EOTH, this album strongly suggests a society collapsing in on itself, everything about to tumble - and there is no India refuge here, whether real or fictional; instead the song segues into a...jaunty Gilbert O'Sullivan piano riff. "Mary-Ann" is brief, with its one-joke (and very simple) lyrical twist and "Ballad Of Bonnie And Clyde" coda (the piano being multitracked into opaque whirlpools, and the track fades with trademark Gilbert oompah-oompahs, or should that be Kurt Weill?).

Finally comes "I Love The Dead" wherein Cooper ups the ante and goes for the necrophiliac vote. With its echoing piano and (yet more) primal screaming, it plays rather like the Plastic Ono Band tackling Gainsbourg. Eventually the song resolves into a massed "Carry That Weight"/"Hey Jude" singalong, complete with bursts of unilateral copulating grunts, before returning to its initial balladry; with the repeated "We love the dead"s, however, we progressively think less of Cooper the playground sicko and more of Nixon and Kissinger, salivating over the cadavers they have created (Cooper's howls of "Cadaver eyes"). The escalating string section calls for a double stop, Cooper gravely swallows, and we are left in an uncertain mid-air.

Billion Dollar Babies is based on a central concern for moral structures (again, consider the picture on the original sleeve of the band surrounding the baby, smeared in Cooper make-up) and stands as a subtle critique of its America, of the dishonesty of its own artifice. What has happened with America, the album appears to ask - has something gone too far, or do its people simply have too much? The sense of acidic satire, as well as the predominance of guitar solos (not all played by an ailing Buxton; Dick Wagner, amongst others, anonymously helped out), betray Zappa's influence, but the beach Cooper approaches here seems infinitely more terminal. His group were apt to conclude their stage act of the period with a non-ironic rendition of "God Bless America" - but was God still watching, or had he thrown up his hands and given up on his self-benighting subjects?
Posted by Marcello Carlin at 13:07