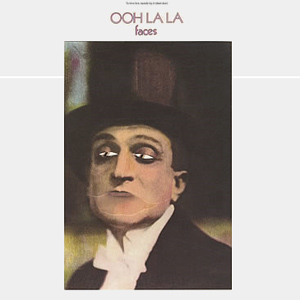 If five years in rock and pop can seem a long time, then eighteen months can conversely seem longer, but even a cursory listen to The Faces' only number one album would be sufficient to sense that something had changed, and not for the better. Consider that since the day of Ogden's Nut Gone Flake - although at least one future was heavily hinted at during that record - pop had, in some ways relevant to this tale, turned into rock, and not long thereafter both Steve Marriott and the rest of the Small Faces had gone into keep-it-simple boogie rock; away from the sculpture and towards the chisel.

But Rod Stewart was already going somewhere else. His Faces - and how quickly they became "his" - were loose and messy in the best and worst ways. Always best experienced onstage, if you caught them on a good night it would be like swimming in the greatest pub you never built. Like Chris McGregor's Brotherhood of Breath, they shambled quite a bit, but all of a sudden they'd pull into tight focus and bear you along with them. They were mates, up for it, and their innate generosity towards their audience can be heard throughout the rockier moments of Ooh La La; Kenny Jones' truncheon-banging beats throughout "Borstal Boys" or his triple rat-tat-tat response to Stewart's "Shake me"s on the very silly "Silicone Grown," or Ian MacLagan's generous, front-mixed keyboards on "Cindy" or "My Fault" - they want us to join in, celebrate the Carlsberg laddism while rubbing out all the bad parts.

The trouble was that Rod was always more about pop than rock, about the business of constructing and delivering songs rather than rocking to randomville, and in the eighteen months since Every Picture had unexpectedly broken big, it's not hard to see how his craftsman hat was in danger of getting carelessly tossed about by The Faces' primal stampedings. Or, if that sounds too unduly harsh, that he was growing away from The Faces, perhaps even felt a little embarrassed about having to keep this boozy company. Ooh La La's predecessor, 1972's A Nod Is As Good As A Wink...To A Blind Horse (kept at #2 by Electric Warrior) was probably The Faces' best album, but Stewart appears on barely half of it; the hit "Stay With Me" notwithstanding, the things one remembers from it are the inventive work of the group as an instrumental entity (the inspired about-turn and osmosis which occur halfway through "Miss Judy's Farm") and, above all, the contributions of Ronnie Lane - "You're So Rude," "Love Lives Here" and in particular "Debris," the latter the profoundest thing the group ever did.

Remember also that Every Picture began its unexpectedly long life as a no-budget busman's holiday from The Faces, but suddenly - for whatever reasons, the foremost being probably that Stewart had the good sense to leave a lot of the solo groundwork to others - it overwhelmed its parent group. They would turn up for a concert and people assumed them to be Rod's backing band. Neither party was happy about this, as evinced by the grim sepia mock-portrait shots on the rear cover; only Lane appears to be smiling, and then only to keep from crying, and only he stares directly at the camera. Everyone else is turning away as though something horrendous has happened, and they cannot face up to its nature.

On the face of it, Ooh La La seems a slapdash effort - the record's total playing time scarcely exceeds half an hour - but much of this was down to the non-appearance of Stewart in the studio. If you wonder why the pleasant but pointless instrumental "Fly In The Ointment" - a sedate jaunt through the netherlands of Booker T and the Allman Brothers - appears at the start of side two it's to compensate for lack of Rod; he didn't turn up until fully two weeks into the recording sessions, and again is only really evident on about half of the tracks. The album is evenly divided - side one the rockers, side two the thoughtful stuff - and while no rock in 1973 was as matey and ready for action as "Borstal Boys" or "My Fault," it's not clear whether you'd want to buy most of these songs a second pint. From "Silicone Grown" onwards, Rod makes a decent show of being up for it - his purring "Wellllllllll" after the second verse, his "Sing it!" after the first instrumental break - but already there is that "lead singer" tone in his delivery which had been absent from his solo work, or at least kept at bay.

Moreover, there is in his work here a definite sense that he wants to move on. "Cindy Incidentally," the album's single hit, is in its honky-tonk ways an indirect precursor to "Born To Run"; there's no franticity about its wary strut - Jones goes for a martial beat - but it's clear that Stewart wants out: "This dream can pass just as fast as lightning," and I don't want to end my days in an upstairs pub room gargling out "Memphis Tennessee" for the ten thousandth time. "My Fault" sees him defiant in his stance; "I was just born this way/Yes, I was born this way" - does this remind you of something to come? - "I ain't gonna change for nobody, never, NEVER gonna change!" Both this and "Borstal Boys" could almost be described as The Prisoner gone to boogie ("Call out your number!" cries Stewart on the latter. "Who's a non-conformer? Not me baby! Oh yeah!"); I, chaps, am going to do whatever the hell I want whether you dig it or not.

But then there is Ronnie Lane's half to consider, and with his five songs Ooh La La becomes a markedly different proposition. "Flags And Banners" is a sobering shock of a haunted trip, over virtually before it starts; he is having a nightmare, the echo is crashing through the trees, and his Other is slipping away from him via a "scarlet door"; "your brothers' helpless prayers were all in vain" - a "Mandolin Wind" without any warmth or hope of a happy ending.

Lane gets Stewart to sing "If I'm On The Late Side" and coaxes the singer's best vocal performance on the record. The story of a delayed, or imagined, reunion - will she wait for him, will he get on any train, late or not? - Stewart keeps reasonable control over Jones' tramping foot percussion and the two Ronnies' roving guitar and bass. Although his performance is relatively subdued, there are still the mannerisms; Stewart does better on the unfortunately-titled "Just Another Honky," about an ending relationship, and it's difficult not to see the song as Lane writing about Rod, and indeed about the collapsing Faces ("It hurts me to think that I'll keep you in chains/Than if you were to leave me," "You can go if you want to/I don't own you, go be wild" - from inclusivity to indifference, all emotions are covered). At the song's end, Rod too collapses; his shivering "forevermore" sees his voice shatter into nameless splinters of dread, as if he too realises that there is no way back, no means of retrieving what he's lost; the football chumminess of the pictures in Never A Dull Moment suddenly seem as far away and irretrievable as Atlantis.

Lane sings "Glad I'm Sorry" in the voice of someone who has simply given up on the world (echoed by Ronnie Wood's pining guitar solos); his refrain of "Can you show me a dream/Can you show me one that's better than mine/Can you stand in the cold light of day?/Neither can I, neither can I" is as bleak as anything to come out in 1973 that side of Berlin. He gives the title track to Wood to sing in his adroitly strained tenor, a folk jig about grandfathers and grandsons and women and you don't know the half of it and we're forever doomed to repeat our predecessors' mistakes and, oh dear, fall in love. The fireside singalong, fuelled by MacLagan's tack piano and Wood's hearty acoustics, takes the record out; Stewart almost immediately alienated the rest of the group, and Lane in particular, by speaking in the music press about how bad the record was and how much better they could have done. Sensing no future, Lane unhappily quit the group in June and formed Slim Chance; after all, had the album not been a mess because of the absence of its main focus, too busy being a global superstar to come to the studio (producer Glyn Johns, by now an old hand at sorting out messes, did as good a job with his sticky-back plastic as could have been expected)? The Faces never made another coherent album again, though were capable of an unexpected autumnal evensong of a farewell with 1974's single "You Can Make Me Dance, Sing Or Anything..."; by the time they officially split in December 1975, Wood was already a Stone and Stewart was in another country. But he hasn't quite gone yet; the intervening two years would likewise prove to be an extremely long time.
Posted by Marcello Carlin at 18:14