The ROLLING STONES: “Get Yer Ya-Ya’s Out!” - The Rolling Stones In Concert 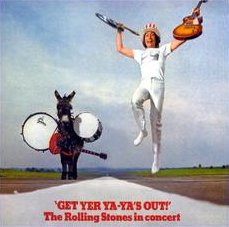 The first fully-fledged live album to make number one, Get Yer Ya-Ya’s Out borrowed its title from Blind Boy Fuller, its cover design from Dylan’s “Visions Of Johanna” (“Oh, jewels and binoculars hang from the head of the mule”) and its raison d'être from a mixture of contractual obligations – this was their last non-compilation album to appear on Decca – and the by now familiar 1970 tactic of beating the bootleggers; Live’r Than You’ll Ever Be was a bootleg of an Oakland concert on the group’s 1969 winter tour and Ya-Ya’s was to an extent a damage limitation exercise, although given the importance of this particular visit it is probable that a legal concert album had always been planned.

Mostly put together from two Madison Square Gardens concerts given at the end of November 1969 – “Love In Vain” comes from their performance at Baltimore on the night prior to visiting New York – the album was warmly received and hailed as, de facto, the definitive live rock record to date. Much of this hailing was an after-effect of the awe in which the Stones’ first visit to the States in some three years had been held; they had in the interim built up their sourly majestic reputation, and from the group’s perspective they felt the need to make a definitive impression; this was their first tour with new boy Mick Taylor on guitar and they pretty much had everything to prove. They were welcomed as heroes, if not quite gods, and the testimonies of those who witnessed them at the time bear evidence that this was something special, and perhaps unrepeatable.

It is debatable as to how much of this worshipful radiance filters through to the record itself. Most live records are produced as tour souvenirs and therefore tend to have a necessarily limited following, but there are plenty of further concert recordings to come in this tale, most of which transcend souvenir status in that they show the artists improvising, playing with their songs, with any luck exceeding themselves and possibly – again, see Dylan at the “Albert Hall” – reinvent the way we look at music. Jazz recordings, in contrast, thrive by the music’s very nature on live performance and direct interaction with audiences and fellow players – see Coltrane at the Village Vanguard, Coleman at the Golden Circle or Ayler at Greenwich Village for just three examples from the sixties alone.

In musical terms, Ya-Ya’s tends about halfway towards the latter in that there is genuine interaction and a degree of improvisation at work in all ten of its songs, although its greater interest lies in the way in which existing song structures are hardened, or flexed, or made to breathe within their inbuilt limitations (see James Brown Live At The Apollo).

Its essential good nature filters through the opening overlapping stage announcements; already the Stones were expected to be The World’s Greatest Rock ‘N’ Roll Band but they wear the assignment lightly. Jagger, as ever, is up for it like a keen scoutmaster and, with both the group and the audience having been worked up by the supporting performances of BB King and Ike and Tina Turner (with Jagger borrowing quite a few of Tina’s trademarked moves), leads the charge into “Jumpin’ Jack Flash” as if this warm welcome had always been expected anyway. It is a rather mundane, if serviceable, reading; denuded of Jimmy Miller’s percussion and voodoo studio manipulation, it stops being frightening and becomes a straightforward R&B rocker, although it is useful to note the song’s musical debt to Stax in Richards’ and Taylor’s crisscrossing single note guitar lines (cf. Booker T and the MGs’ “Time Is Tight”).

Still, they are warming up, gradually getting into the occasion. “Thank you kindly,” drawls Jagger in an Apollo parody. “I think I bust a button on my trousers,” he winks. “You don’t want my trousers to fall down – now do ya?” The audience roars the expected response, but this is far from the performance art of an Iggy or a Morrison, or indeed from the nudging nudges of Reg Presley or PJ Proby a few years earlier; instead one thinks of Max Miller and his red and blue books – it’s all a friendly tease. Then the group bursts into Chuck Berry’s “Carol,” one of their earliest recordings, and it’s not a bad update at all, with Richards’ guitar shivering at Jagger’s “Sho-ow-out!” and jumping like a newly electrocuted kangaroo at Jagger’s “Steal your heart away.” Jagger’s “Dance so good” and Richards’ immediate, instinctive response also pave the way for “Brown Sugar.”

“Stray Cat Blues” again indicates the aesthetic gulf between the produced, record-as-statement Beggars’ Banquet and relatively straight stage performance; on the studio version everything is bristling to the point of numbness with unspoken tension, and despite provocatively lowering the age of the song’s female protagonist to thirteen – did anyone in the audience even notice that? (“Never heard things like that”) – the live performance is thrust upwards into a punk thrash, complete with regular, rhetorical Charlie Watts cymbal crashes, and musically demonstrates some subsequent influence on “Sweet Home Alabama” (although the original song was reportedly inspired by the Velvets’ “Heroin”). So far, this is all very pert and spry, but not exactly revelatory.

“Love In Vain” is taken a little more patiently than the studio version, and the influence of Peter Green’s Fleetwood Mac probably cannot be understated, especially as his successor in Mayall’s Blues Breakers, Mick Taylor, is present. Now, however, the new degree of interaction between the two guitarists is brought to the forefront for the first time on the record; this is the sound of Taylor proving himself to the rest of the band and to Richards in particular. The interaction is immediately deep and aqueous; the two rumbling arches of double guitar in response to Jagger’s first “station” which become a groaning but fulfilled triple at his final one are as immense as the Aegean and the song’s slow burn is compelling. Watts too has his moment here when early on he produces one soft cymbal crash followed by an extremely loud one, finally resolving with a receding cymbal hiss. The double-guitar tension slowly builds, incorporating the creative use of controlled feedback, until all erupts in an ecstatic Hubert Sumlin explosion.

Then we reach the ten-minute revisit of “Midnight Rambler.” Despite Wikipedia I am more inclined to continue thinking of this song as an Eldridge Cleaver reimagining than an Albert de Salvo transcription or transposition; the Boston Strangler sequence is meant to be jump-start shocking rather than dull documentary. In any case Jagger can hardly wait to get into his big setpiece, already wailing away on his harp before the group has even started with the riff; he grasps the song and plays its role to the full, even though he, perhaps wisely, largely steers away from improvisation and leaves the rest of the group to invent new dots and connections. In the second, Neu!-inventing section the band steam off a thundering series of unisons, Wyman’s bass, as fuzzy as Hugh Hopper’s, arguably leading the charge. Then the song breaks off and the audience, not yet fully knowing Let It Bleed, applaud and cheer prematurely, while Jagger and the two guitarists knuckle the song down to hambone wire tension; Jagger, mixed back so as to sound part of the group rather than in front of it, eventually tires of the words and goes into determinedly inarticulate mumbles, growls and whoops, to the audience’s evident delight (“GodDAMN!” exclaims one of them midway through the knife-edge quiescence). Where the Let It Bleed take was chilling because of its manufactured, distanced menace, here we have an arguably more disturbing scenario since Jagger has now dived fully into the body of the killer and is – whisper it – enjoying it; there is, only a week before Altamont, already a fatal joy in termination. “Sympathy For The Devil” initially sets out as a bar band rave-up – perhaps as a defiant response to the lady who cries out for “Paint It Black, you DEVILS!” – and chunders along unspectacularly (the secret in the studio was the maracas, and the semi-illusory sense of distance) until Richards suddenly snaps and slaps out a gagglingly grand guitar solo, pulling the whole group into a different orbit (“Oh get on DOWN!” cheerleads Redcoat Jagger) as the ending crashes into a luminous ocean of lighter fluid.

Suddenly the group are committed. “Live With Me” is nothing much in this environment but its punk attack is more than agreeable. “Let’s ‘ave a look at yer!” squeals Jagger as the group go back again towards the font, Chuck Berry, and their “Little Queenie” burns like an incandescent border post at the furthest departure gates of rock. Everybody steps up their game here – and what a song; does Chuck invent Kraftwerk here (“Well she looks like a model/On the cover of a magazine”) or was “I Love Rock ‘N’ Roll,” as done by Joan Jett, the definitive answer song from the belly of the record machine? – with Ian Stewart seemingly hammering 20-inch nails into his piano, Wyman doing a great “Interstellar Overdrive” bass ascent at the end and everyone again crashing through the seventeenth wall.

After that, it’s the celebratory homeward lap of honour; “Honky Tonk Women” is taken more slowly but more juicily than the 45 – Keith shrieking out the harmonies with Mick at the mike – and “Street Fighting Man” offers a fine, surging climax; in his original Rolling Stone review Lester Bangs compares Richards’ guitar work to both Moby Grape and Stevie Wonder’s “I Was Made To Love Her,” and while there is truth in either of these assertions there is an unmissable rise of grandeur which very naturally says that, without being especially loud or metallic or epic, the Stones’ roll combines with their rock in ways which most other rock bands of the period could only eye with relishable envy; there is an intricate completeness to the group’s playing here which puts me in mind of Cecil Taylor’s furiously compressed but always logical clusters of piano; not once on Ya-Ya’s do they play “out” but by the sheer power of their invention they manage to radiate a musical radicalness which far outdoes some of their more superficially “adventurous” contemporaries. I certainly wouldn’t call it the greatest live album ever made, even though it became something of a rite of passage in terms of dressing room warm-ups – the Faces, for instance, always played the album before going on stage to get them in the mood – but in terms of showing just about Everyone Else who was still Boss, it does a highly efficient job, even though it has to some degree to retract into the sixties in order to prove it. Next week’s entry, however, is probably the first album which could not possibly have existed or been conceived in the sixties, and takes some of the implications of “Midnight Rambler” to a hitherto unthinkable extreme.

Posted by Marcello Carlin at 11:17