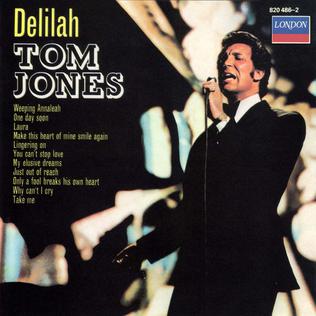 It seemed that, even in the supposedly liberated new world of 1968, a man was still expected to be a man, to fulfil certain needs and obligations. If nothing else, the 36 minutes or so of Delilah prove that even the most blustering of pop bears could have their doubts about manhood. Consider “Delilah” the song itself, which I have always found an uncomfortable and disturbing listen in its most famous version. It doesn’t surprise me at all that Les Reed and Barry Mason originally wrote the song with PJ Proby in mind; Proby certainly recorded it first, and his version appeared on CD many decades later, but he was markedly less than keen on it and so Tom Jones was offered the hit. It is not revisionist thinking to assert that Jones was a more fitting singer for the song than Proby; the latter is far too sure of himself, in a song which is supposed to confront the singer with his own failings. Whereas Jones plays it as a kind of extended sob, his regular rough downhill skis of register fermenting into growls of self-loathing. Piano and xylophone stab like particularly unforgiving knives amidst a nuclear countdown clock, the lead guitar uncommonly heavy – it is rumoured that all of Led Zeppelin appear in some guise on “Delilah,” but it is a fact that the young Reg Dwight was also in attendance – and above all this, and the incongruous Mariachi trumpets, Jones wonders what he’s doing even as he does it; what drives him to murder is her pitiless laughing, the implied target being his own sexual inadequacy. This is what he can’t take any more.

Nothing else on Delilah is as overtly extreme as its title track, but this theme returns again and again. On Leon Ashley’s “Laura” – which, if the sleevenote is anything to go by, the singer probably heard via Brook Benton’s version - Jones faces his cheating wife with an enormous sorrow outweighing any rage, which in any case is again directed towards himself. The name “Laura” is answered by a timpanic thump. He is asking her to touch him – “soft GEN-tle hands caress my body” – perhaps by means of force. Again and again he pleads “What’s he got that I ain’t got?,” again accompanied by unlikely, jaunty trumpets. “TELL ME!” he suddenly roars. Then we reach the discomfiting twist: “before I pull this trigger,” he hisses (followed immediately by a weirdly compassionate sigh of “Oh, Laura”), but the listener is in little doubt that, unlike the protagonist of “Delilah,” this man is far likelier to take his own life than hers.

Yet later Jones offers us a fairly startling reading of the George Jones/Tammy Wynette number “My Elusive Dreams” where, overcoming a numbing unison of flute and alto flute, he and his (here) silent partner wander through various disunited States trying to find “it.” But the ending is always the same: “We didn’t find it there.” They have a child in Memphis, they end up chasing non-existent goldmines in Alaska and end up, chillingly, without their child (“Only two of us move on”). All to follow his continued avoidance of himself, his inner absence of “it.” “And still,” Jones sighs with grieving pity, “you won’t let me go alone.” A failure, too exhausted even to die.

This is not exactly the picture that rep reliable DJ Pete Murray paints in his sleevenote, which, as ever, gives the impression of a disappointed big band buff compelled to put up with this noisy pop thing. He remarks how knocked out he was by Jones performing “It’s Not Unusual” on TOTP in early 1965 in the context of a “stereotyped” chart and how he instantly differed from other assumed mediocrities (“And, practically unheard of in this rocking day, a singer who could syncopate”). He then goes on to mention the current album thusly: “Tom is in ballad mood with a decided country flavour.” All very true, but there is a reddening dash of ice in this record which cuts through stereogram complacency. Consider, for instance, Mickey Newbury’s “Weeping Annaleah” (these are the choices of a connoisseur) where, against Big Jim Sullivan’s oddly accentuated but basically blues-driven mandolin-style guitar lines, Jones turns the tables on his would-be lover with something like a sneer: “You think you’re ready for me?” he queries as the song’s waltz reaches a somewhat sinister pause before an extremely quiet fairground organ enters. His “For-EV-er! And EV-er! And EV-er!” appears to be pummelling anyone’s expectations of satisfaction, sexual or otherwise. Maybe it’s not my fault, he’s saying, maybe I’m too damned good at it…

“One Day Soon” retreats to more familiar “Green, Green Grass” territory but any soulfulness is buried beneath the swamps of heartachey block piano chords and the standard anaesthetic backing choir. “Make This Heart Of Mine” struggles to make its heart felt amongst more “Lonely Bull” trumpets but the staccato unisons and hammered drums of “And! If! You! Don’t! Come! Back!” followed by the long swoon of “Soooon….” work well, as does the passage from Jones’ climactic whimper into cascading strings of comforting cloth. “Lingering On” was a James Last tune in the “Strangers In The Night” style but Jones can’t quite grasp anything here. “Something went WRONG!” he bellows to make himself audible above more chocolate box piano and Light Programme choirs - as with Dean Martin, the arranger was not always the singer’s best friend, although there is a nice concluding trope where the orchestra flutters down like a butterfly landing atop a house of cards before folding in on its own collapse (repeated in a couple of tracks on side two), with some plangent end commentary from Sullivan’s guitar.

“You Can’t Stop Love” goes for a Four Tops feel – rather poignantly, given that Holland-Dozier-Holland allegedly had Jones in original mind for their string of Stubbs-sung hits – but is basically a nondescript uptempo belter which proves that British session players, however good, didn’t quite have the “it” of the Funk Brothers. The bells which answer “diamond ring” are corny rather than affecting, and although Jones does his best – “Yeeeesssssss you CAN’T!” – the song turns more disturbing corners (“You can’t keep my love from your door!”) and finally dwindles away into discontented nothingness. Jones’ reading of the old Patsy Cline number “Just Out Of Reach” is decent enough (if occasionally reminiscent of a burping elephant) but over-flashy trumpet lines spoil the picture of loss. “Only A Fool” finds Jones finally facing up to himself; “If I’m a man?” he asks near song’s end, with no guarantee that it’s rhetoric. He is answered by another thump of the timpani.

The succeeding “Why Can’t I Cry,” however, is a strange creature indeed, from its “Strawberry Fields” intro onwards. Although Jones makes the mistake, as he does on several other tracks, of peaking too soon emotionally, such that his despair sounds overmannered and bellicose (but is this all in keeping with the bear desperately roaring to be loved because it’s the only way it knows?). The waltz sequence, too, is hammy, but Jones’ stark “Can’t heat the chill of my room” brings us back to the world of the lonely man in his lonely room (even the Marriott of “Lazy Sunday” was able to connect with the birds and the seashore, by whatever means) and makes me wonder: how would this album have sounded, with the same songs in the same order and with the same arrangements, if sung by Scott Walker? We would have had two entirely different albums for sure, but Jones’ approach is strangely affecting because he is so obviously trying to break down that barrier of machoness; hear his final whimper of “cry” and its subsequent octave drift, and it sounds as unlike Tom Jones as anything he ever did.

As though to drive the point home, he concludes the album with “Take Me,” the same George Jones song with which Val Doonican concluded entry #50. Here the album’s journey is delineated; he begins all swagger and bluster, knife glinting, ready to kill, but ends up in the darkest room, in Siberia (and “Siberia” in this reading comes out as a dissolute mumble), begging to be loved (his “smiiiiiiiile” is the croak of an unconverted frog), numbed and helpless, and clearly needing “it” a lot more than Val did. This isn’t “easy listening”; this is Nick Cave in embryo.

Posted by Marcello Carlin at 10:51