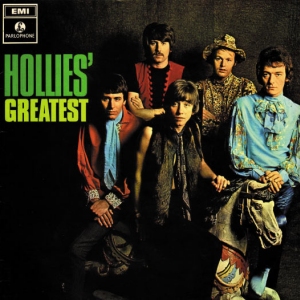 The British theatre has a useful phrase which I have deployed on many occasions; the “rep reliable.” This is normally used in reference to long-serving character actors who have worked in the business for many years and, although they never become stars, are uniformly respected by their peers and are likely to continue functioning when many far better known actors reach burnout or breakdown, even if words such as “innovative” or “remarkable” never disturb their unobtrusive career path.

The Hollies are widely regarded as the rep reliables of the sixties Brit beat boom; rarely out of the charts (of the beat group explosion, their sixties hit single tally is a very close third to the Beatles and the Stones) and hardly ever at number one; always dependable, always turning up for gigs and television and radio appearances, never threatening or radical (much to the chagrin of its key member, but more of that in a moment); always popular but scarcely ever screamed at or idolised.

At least, that’s the general perception, but listening again to the remarkable multipronged attack of their “I Can’t Let Go” or the balalaika drone underscoring “Stop Stop Stop” or the steel drum interlude on “Carrie Anne” or the incongruous pedal steel guitar which wanders into “Jennifer Eccles” reminds me that really there weren’t any other groups like the Hollies and that their legacy is stronger than is usually credited. “I Can’t Let Go” is a tremendous kick-off to this assemblage of fourteen of the Hollies’ first seventeen UK hit singles (the missing trio are their first two hits, “(Ain’t That) Just Like Me” and “Searchin’” and their subsequent, peculiar reading of Harrison’s “If I Needed Someone”) from its launch pad of pregnant, throbbing bass and its sudden detonation of harmonic flowers (“GOOD-BY-YE!”). Following the earnest soul searching of many of 1968’s entries it is refreshing to return to what, in the absence of a better name, I will call power pop for the first time since Revolver; “I Can’t Let Go” sparkles with endless invention – the volcanic eruption of “HOLD ON!” halfway through, the song’s brilliant four-way ending. This is a band wholly confident with itself, and moreover, ahead of both the Byrds and the Band, and virtually alone in comparison with their peers, a group offering seamless three-part vocal harmonies. No wonder Sloan grabbed the song with all eight hands to such good effect in 1996’s Sloan Party.

That multifaceted democracy, however, may well have been the Hollies’ greater downfall; although Allan Clarke was clearly spotlit as the lead singer, both Tony Hicks and Graham Nash take their fair share of lead turns – see, for instance, the subtle way in which all three get a verse each to themselves in “Carrie Anne” - and the group approach precluded any “stars” as such from emerging within their line-up. Certainly, as the Guinness Book of Hit Singles and Albums puts it, the Hollies were undoubtedly one of the sunnier-sounding of sixties pop groups, and by default the most cleancut, although their songs, initially provided by order from professionals like Graham Gouldman but then written by various permutations of the Clarke-Hicks-Nash team, would progressively undermine this spotless image.

Although Hollies’ Greatest, as with other EMI hit compilations of the period, is not compiled chronologically, it does make sense to approach these songs as such. Hence their version of Maurice Williams and the Zodiacs’ “Stay,” their first top ten hit from late 1963, is chaotic but hungry and happy; the group cheerfully stumble over themselves and seem to be improvising the song as they go along; there is a fabulous kick to the proceedings and a stinging swing which reminds us how much of a release the beat boom was from what had preceded it, complete with its nod to the Beatles’ “Twist And Shout” at the end.

Thereafter they caught up swiftly; their reading of Doris Troy’s “Just One Look” is polished but not neutral (and won the girls over), and their first self-composed hit “We’re Through” is a ragged Lennon wannabe but containing some inventive, needling single note acoustic guitar lines and some highly effective octave-leaping multisyllabising from Clarke (his “I” and “alone” and especially his woeful Droopy falsetto of “later”), together with some curious foot stomping. The young Gouldman’s “Look Through Any Window” is a fine miniature portrait of everyday lives, three years ahead of “Penny Lane,” with “Teenage Kicks”-anticipating handclaps and already a sense of ennui – we are reminded quite forcibly that, Davy Jones aside, this is the first entry from an act to come from Manchester, and it’s impossible not to picture the youthful Johnny Marr admiring Hicks and Nash’s ringing triplets and the tonal question mark of the song’s unresolved closing chord. Gouldman would go on to pen “Bus Stop,” one of the sixties’ best portraits of rainy Manchester (along with “No Milk Today” which Gouldman composed for Herman’s Hermits) with its witty minimalist syllabic wordplay (how many sixties hits used the word “queue” to such dramatic effect?) and its ruefully confident path to the accidental aisle (not to mention its Klezmer-derived midsong instrumental interlude).

“Here I Go Again” is Moptop confident with its excitable falsetto yelps (“No more, no more!”) and its effective self-contradicting premises (“What can I do if there’s nothing I can do?”). As with “I Can’t Let Go,” the singer’s been let down by love but always he will go back to suffer and rejoice one more time. Their “Yes I Will” is far more compact and springy than the version recorded by the Monkees (see entry #47); their sunshine has yet to be obscured by cloudy splinters of doubt. Clint Ballard Jnr’s “I’m Alive” gave the Hollies their only sixties number one (and one of only two in total) in Britain (and even that single engaged in a curious tug-of-war with Presley’s “Crying In The Chapel”) but it’s a more than worthy chart topper; Clarke alternates very effectively between grave bass verses (“Did you ever see a man with no heart?”) and gradually heightening and enlightening choruses (“Now I can breathe, I can see, I can touch, I can feel,” four years ahead of Tommy), reaching a satisfying climax with a great ectopic run of rapid heartbeats, just to confirm that they are indeed alive, just before the final major sixth.

“Stop Stop Stop,” however, was when things got really adventurous. A #2 hit single in that most extreme of pop years, 1966, exploring the increasing madness and psychosis of a belly dancing peep show fetishist, eliciting a dark, unspoken past (“Body moving, bringing back a memory/Thoughts of long ago”). Eventually he loses control, attempts to rape her and is summarily ejected into the street but shrugs it off with a resigned “Happens every week.” I thought briefly of the uprooted, destroyed widower of “Paint It, Black.”

Thereafter there ensued a slow war of attrition within the band with tentative paws striking out into raw territory; “On A Carousel,” top five in March 1967, takes a fairground chase as an analogy for the rat race with some Mod-ish rhythmic angularities. Then came Nash’s attempt to take over the group and force them into untried adventures, ultimately to little avail; neither the Evolution or Butterfly albums attracted much notice, critically or commercially, and “King Midas In Reverse,” the only track on this album to miss the top ten, was a premature declaration of Nash’s restless independence. Worlds away from the bland anti-assurance of Taio Cruz’s “Break Your Heart,” Nash warns any potential Others away from him as the rest of the group murmur their assent (“All he touches turn to dust”) as he slowly eliminates himself (“I’ll break you and destroy you…given time”). Meanwhile, Johnny Scott’s strings and brass erupt around the group like a field of skyscrapers being dropped from forty thousand feet and they struggle to maintain balance despite Bobby Elliott’s apocalyptic tom toms (the drums are always a key feature of Hollies singles; see the emphatic warning cymbals of “Stop Stop Stop”) and the fire alarm flute flutters which screech out at the end of the song’s middle eight like Lancastrian vultures, ready to gobble the rejects of the sunset cooling towers.

With that relative failure, the group settled for askew juvenilia bubblegum, possibly inspired by Dave Dee’s contemporaneous work; “Carrie Anne” remains a strange not quite child/not quite adult declaration of sexual arousal; note Clarke’s agonised cry of “You’re SO! SO like a woman to ME!” (answered by Hicks and Nash’s shoulder-shrugging “So! So!”) and the aforementioned steel drum interlude, together with a propulsion incongruously reminiscent of the Who. “Jennifer Eccles,” their most recent hit by this time, continued this theme (albeit in a more down to earth fifties Manchester setting) though betrays a winking loss of innocence (“One Monday morning, found out I’d made the grade/Started me thinking – had she done the same?”).

The sliding wolf whistles were enough. It is strange to think that the co-author of such things as “Jennifer Eccles” was by then less than 18 months away from adventures and riches on another continent. But Nash felt as out of place in the Hollies as he looks on the album cover; bored with touring and with what he perceived as an inevitable path to cabaret time – not to mention the prospect of a Dylan tribute album – and while on a visit to Los Angeles took the advice of Mama Cass, quit the group and hooked up with two other chaps then at something of a loose end. So ultimately this record is the story of a slow-burning escape; yet the freshness and vitality of the best Hollies work of the sixties still resonate in unexpected ways today; note also their exceptional success in Sweden, where their forward-mixed propulsion found at least two willing listeners.
Posted by Marcello Carlin at 16:53