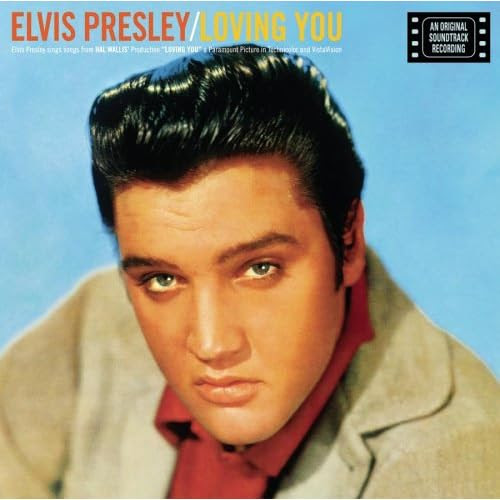 The moment I always remember from the film is towards the end; the local stuffed shirts are considering banning “Deke Rivers” from performing in their town but his agent/mentor – Lizabeth Scott, portraying a curious variant on Colonel Parker – is mounting a passionate argument in his defence, citing Prelude de l’Apres Midi d’une Faune and Le Sacre du Printemps amongst other precedents of cultural outrage. I am reminded of an episode of Bilko where the platoon is presented with a well meaning new entertainments officer who proposes lectures on Beethoven and Stravinsky and Silvers does his best to assuage the highly sceptical soldiers: “Stravinsky? That’s Minsky! He changed his name when he went into vaudeville!” And that's to say nothing of "Elvin Pelvin."

It was indubitably the case that Presley was still regarded in many quarters as Beelzebub with extended hip rotation even as late as 1957, hence director Hal Kanter’s insistence that the above speech be included in the film of Loving You. And the payoff – that Elvis’ “Deke Rivers” character does not exist, that he is an orphanage escapee who borrowed the name from a gravestone – is in retrospect as chilling as Cary Grant’s darkening acknowledgement of “Archie Leach” in His Girl Friday, and not just because of the unavoidable Jesse Garon analogy; given that he is supposed to be an orphan, what are we to make of the cameo appearance by both of Presley’s parents in the final reel, one of whom had less than a year to live?

The rest of the movie, however, turns away from all of that, and offers a decently sanitised version of The Elvis Presley Story, complete with all the stock ingredients; love interest, love rivalry, fist fights and plenty of songs. Well, seven songs, at any rate, all of which appear on side one of the soundtrack album; side two is taken up with five ballad performances of variable degrees of curious, three of which previously constituted the Just For You EP. Here was an early indication of RCA’s continuing slapdash approach to constructing Elvis “albums” and particularly his movie soundtracks, installing filler as and when required without thought for continuity or unity.

The songs themselves represent a considerable qualitative downturn from those collected on Rock ‘n’ Roll. On the opening “Mean Woman Blues” you can sense Presley – and Scotty Moore – doing their damnedest to make the song interesting and vibrant, with the opening handclaps, Elvis’ hiccup of “I-hi-I-got-a-woman,” and Scotty’s fire alarm-smashing guitar screams.

But then the fundamental problem becomes immediately apparent. The space Presley was afforded, both at Sun and in his ’56 RCA days, has vanished, been clogged up with unnecessary detail. Dudley Brooks’ piano is in the way of the beat and the production is compressed to the point of constipation, as though all the vital detail was being systematically bleached out. Nothing wrong with Elvis, as such – his rolling up of “Sometimes I think she’s almost as mean as me” crunched into one tidal wave of a word, his double “Ooooooooooh!”s – nor with Scotty, whose two solos rip everything else around them to scarlet ribbons.

The most audible problem here, as with most of the rest of the album, is the Jordanaires, whom I would happily have tied up in a bin liner and kicked off the edge of the Grand Canyon. Their nineteenth-century Disneyland barbershop harmonies block the path of everybody and everything else, reduce Presley’s sharpness to a blur. Fittingly, if pitifully, the song is faded out abruptly, as though Elvis’ caravan has itself careered downwards into the Canyon’s belly.

As “Hound Dog” proved, however, even the Jordanaires were bearable if the song were strong enough, and the songs here – largely commissioned by Parker from his Hill and Range school of off-the-peg hacks – are almost uniformly below par. “Teddy Bear” is embarrassing in the sense that Stalinist show trial confessionals were embarrassing. This soda pop pseudo-dominatrix fantasy seeks to reduce Presley from tiger/lion status to that of a neutered toy, as though he were fucking Paul Anka or somebody. One of Elvis’ central failings is that he never realised enough times that he was Elvis (just as one of his others was that he realised it only too well) though goodness knows he does his best here to subvert the tedious anti-message with his “Ba. By. Let. Me. Be”s and his swooping growls of “yourrrrr teady bear” as though he’d still be willing to tear the head off anyone who came too close to him.

“Loving You” itself, being written by Leiber and Stoller, is a far more interesting and complex song and performance, despite Brooks’ opening Sunday school piano and unnecessary block chords throughout; this is superficially structured as another “Love Me Tender”-style devotional ballad but both sentiments and delivery are more ambiguous; “Makes no difference where I go or what I-I may do,” intones Presley with something approaching a wink, succeeded by a stutter which may be nerves or contempt, “yyyyyyyou know that I’ll always be loving you.” Moreover, the song offers no real guarantee or pledge of fealty: “and-uh if I’m seen with someone new, don’t be blue…don’t ya be blue,” he sings, the latter four words almost as a rebuttal, or a scowl; his subsequent “TRUE TO YOU” is emphatically over-emphasised. Finally, any words disappear into a quiet maelstrom of vowels and breath: “You kno-ho-how who.” The effect is somewhere one stop past unsettling. Or maybe he’s already singing to a ghost.

“Got A Lot O’ Livin’” is the most “alive” performance on the record, but still falls short of convincing; it is nearly jubilant, almost ecstatic, but something is preventing it from crossing the line into transcendent, a failure of nerve, that damned fatal urge of Presley’s to please everyone. Again, he works hard – as does the star of the track, DJ Fontana with his raised eyebrow floor toms, and Scotty, who sneaks a deliberate “bum note” into the song’s fabric after Presley sings “you’ll never know what you’ve been missin’.” It’s entertaining and vibrant enough and without doubt anticipates the version of Elvis that Les Gray’s Mud would subsequently adopt and adapt, but the one-vowel compression of “And there’s no one whom I’d rather do it with than you” does not suggest unbounded sensuality as much as Dean Martin attempting to rock it up (which Dino wisely never attempted). Once again there is a sudden ending as though both song and musicians have been ejected down through a trapdoor which removes the necessary picture of naturalness.

“Lonesome Cowboy,” however, is the record’s most fascinating and disturbing track. Beginning with an extended rubato baritone lament – “I am just a lonesome cowboy” – which seems to do nothing so much as invent Billy Fury against melodramatic Spanish guitar and piano, the song briefly revisits the alien planet of Presley’s “Blue Moon” with detached whistling and Moore’s detuned guitar. However, the sound once again fills up with piano and those blasted Jordanaires, and Presley’s attempts at starsailing (“Saddle up and ride you lonesome cowboy”) are repeatedly defeated by their blundering, blustering “NeeeeAR”s, “FaaarRR”s and their positively disturbing “FOR A STAR FOR A STAR FOR A STAR” which momentarily threatens to drown the track altogether. Their bludgeoning continues – “Ride-a-ride-a-RIDE,” “Sing-a-sing-a-SING” – to such an extent that it feels as though Presley is being actively tortured by them (“Elll-lonesome cowboy” he whimpers at one point, before being submerged in the oncoming tsunami that is the Jordanaires’ triplicate “DREAM OF MINE”). Then we return to the rubato tone of the intro, and suddenly Presley is genuinely left alone. “If you don’t call me baby” he carefully enunciates, “then I’m never comin’ home,” answered by a suddenly low “home” harmony and funereal piano. The feeling is one of Elvis’ most fearsome battles between what he wanted himself to be and what others wanted him to be. This disturbance does not subside with “Hot Dog,” an otherwise fairly throwaway Leiber and Stoller slice of cod-skiffle which is constantly derailed by Moore ’s practically atonal to the point of actively dissonant guitar lines and by the now rather scary Jordanaires’ cries of “WAH WAH!”

Finally, however, we get back to Comfy Elvis with “Party,” his least convincing “rock” record with markedly under-enthused “Whoooh!”s, and despite his spirited “I can shake a chicken in the middle of the floor!” the George Shearing cocktail harmonies of the song’s structure ultimately defeat him, and the final five bangs followed by collapse are indicative of a massacre.

On side two we arrive, for the reasons detailed above, at a different record altogether. He was continuing to tackle recent hits but both “Blueberry Hill” and “True Love” rank among his least convincing and necessary interpretations. Presley’s “Blueberry” loses the subtly unstoppable minimalist momentum of Domino’s, where neither piano nor horns ever stop playing; here we have rather uninvolving call and response between vocals and piano which obviates both tension and purpose, the only interesting moment being Presley’s sorrowful “Love’s sweet me-HE-lody” in the second middle eight. “True Love” – the first song to appear on two separate number one albums – is meanwhile recast as a Vaughan Monroe moonlight on the prairie close harmony exercise and features the Jordanaires’ most convincing contribution to the album but is hardly necessary, although it does provide a nice link into the pained, acappella “Uh-don’t-a-leave-a-me NOW!” which opens the next track. Despite the workaday arrangement and production, Presley turns the commitment level up a notch here; “What-a-good-a-is DREAMIN’” he exclaims, followed by a grave “BY MYSELF?” before lamenting “My arms would just gather dust like a (acappella again) book on the shelf” and taking the song out on a nearly tormented “DON’T CLOSE YOUR EYES TO MY PLEA.”

“Have I Told You” merely makes me regret that Elvis didn’t live to sing the similarly named Van Morrison song; the phased, antiphonal handclaps are a nice touch, and again Presley strains against banality – his growled “lately,” his epileptic rhetoric of “Uh-hav-uh-ah-uh-told-YEW?” – but again a pianist who thinks he’s Shearing, and the irritably grinning Jordanaire harmonies, combine to lower the tone.

Last of all comes a song in which Presley could believe – Ivory Joe Hunter’s “I Need You Now” – a song of absolute dependence verging on paranoia, and here Elvis actively fights the banal environment, whatever it throws at him; even if his astonishing “I lie and wait to hear you knock-a-upo-hon the door” is answered by the Jordanaires’ wretchedly deadpan “Knock upon the door” – so hideous that you momentarily wonder whether you’re listening to a Stan Freberg parody - he refuses to give up; “To keeeeeep me happy” he wriggles, like a neurotic, inwardly-coiling snake charmer.” “Please please come back” he whispers. “When day is done I MISS YOU SO” he laments in Legoland. Fontana ’s hard snare brings down the curtain. The fire, the Other, was evidently still in him, but the extinguishers – the dampeners - were beginning to win out. Neither Beethoven nor Stravinsky would ever have been caught out that way, but then neither was in the business of “pleasing everybody.”
Posted by Marcello Carlin at 12:07