Tommy STEELE and The STEELMEN: The Tommy Steele Story 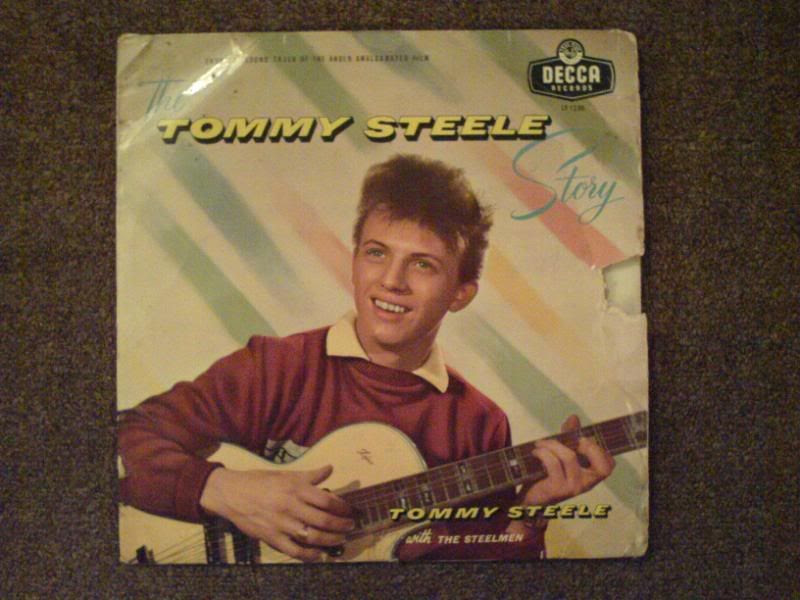 (Special, sincere and profound thanks are due to Mark Grout, who very kindly found a copy of the album for me in its original 10-inch format and also provided the cover scan which accompanies this entry)

Finally we reach the first number one album by a British artist, and also – and indisputably – the first British rock album to top the chart. I accentuate that “indisputably” because, from the initial Six-Five Special express fade-in to “Take Me Back, Baby,” from which the 22-year-old Steele emerges like a suddenly drenched jack in the box to ask “What have I done to make you blue?” in his broad Bermondsey brogue and immediately takes off on an astonishing foray of “Oh-ho-ho” sobs and yodels, “whoo-hoo-hoo!” squeals, the occasional decisive statement (“WIDEN YOUR EYES!”) and moans (“Morrrrrrr-more-more-MORE!”) which can aptly be described as orgasmic, this feels to its bones like the first rock ‘n’ roll music played in Britain; the music is messy but not apologetically so and the seasoned jazz pros who made up the Steelmen have plenty of gusto to spare (note Roy Plummer’s upward, scampering slide on lead guitar after Steele’s “Never no more to run away” and its final ducking single note retreat after the climactic crash of drums – fittingly the drummer is Ronnie Verrell, later the man behind Animal in The Muppet Show) but can knit tighter than a Warminster Women’s Institute splinter group when needed. It pulses like the next, logical and younger move from skiffle, although Steele has always been careful to stress that he was not part of the skiffle movement; as a novice teenage guitarist and songwriter his primary love was country music and his main inspiration was Hank Williams.

This latter too is important; despite another performer's repeated claims to the contrary, Steele more than merits the title of Britain’s first true rock ‘n’ roll star, and this is borne out not only by his absolute and palpable attachment to the music, but also by his direct creative input; nearly all of the fourteen songs on The Tommy Steele Story were written or co-written by Steele himself. Of the film itself I can recall little; I remember seeing it at a very young age on Saturday morning television in the early seventies but can’t recall too much from it except for Steele’s usual cheery have-a-go persona. It more or less told things as they happened; his spells working the Cunard lines and as a merchant seaman, his discovery at the 2 I’s coffee bar in Old Compton Street, and so forth.

But the reason why the songs have lasted so well despite their undoubted air of primitivism, the physical process of creating something new and possibly unprecedented, must be attributed to Steele’s co-writers; two young wannabes named Lionel Bart and Mike Pratt. The latter was a particularly interesting character; though now remembered mainly as the “living” co-star of Randall And Hopkirk (Deceased) and as the father of musician Guy Pratt – the literal missing link between Pink Floyd and The Orb – he was a key behind the scenes mover in the early days of British rock. In tandem with Bart’s already very evident technical expertise, they combined to concoct a rather sardonic and self-aware blend of lyrics and music with a uniquely British tinge, a heritage inherited more from music hall than the blues, though with enough zap pow pop artism to make it as current as young 1957 British music could hope to be.

At times the approach of Steele, Bart and Pratt verges on the postmodern; “I Like,” for instance, invents a disgraced seventies glam performer (from the musical point of view) fifteen years ahead of schedule with its echoing yelps of “I like, do you like?” alternating with comments from bass and guitar and mordantly knowing observations on the process of making the record, 21 years before Scritti Politti (“Hear them strings go plink-a-plunk/You’d never guess it was a pile of junk!”). Then the song briefly blasts off into the real future as Steele exhorts “Blow those old cobwebs away!” and “Now shake them dusty chandeliers!” before suddenly and inexplicably stopping in mid-flow.

As a ballad singer Steele clearly had the Sun Elvis in mind as well as Hank; “Will It Be You” is essentially a grounded tribute to Presley’s “Blue Moon” with prowling prairie acoustic guitar and bass but with a noticeably less grounded vocal; Steele’s voice aches with suppressed expectations of the carnal, as witness the virtual purple wax dart of his “theyeyeyeyeyey tell me why,” the music constantly shifting twixt diminuendo and crescendo, contrasted against the jarring Queen’s English precision of “why,” “try” and “die” and the sequence of “smile,” “my,” “I” (or “eye”?) and “deal.” “A Handful Of Songs” – a big hit in its own right as a single – adheres more to the Hank template, with careful emotional control on Steele’s part (even when faced with the languid sighs of “sleepy time baby lullabies” which do not suggest a cot) and a tinge of foredoomed regret (“Here’s a handful of songs…going cheap”) which the jaunty whistling doesn’t quite dispel. “Butterfingers,” though (another Top Ten single), takes Elvis back to SE1, with Steele’s serpentine hiss of “Butterfingerrrrrrsssssss,” his conversion of the “me” in “when you were with me” into a pained and not quite decipherable yelp, and skilful uses of pauses and silence, balanced out by Red Price’s oddly fitting Ben Webster-ish tenor lushness, though Plummer sketches a lemming jumping off a cliff on his guitar in response to Steele’s “I’m gonna hold you,” leading to the singer’s startled gasp of “AGAIN!” at the end. With the possible exception of Terry Dene, no one else under 25 in 1957 Britain was doing anything like this.

Throughout the album it’s clear from Steele’s high anxiety that he is dying to, shall we say, discard childish things; thus while “You Gotta Go” is ostensibly about his need to travel (“the travelling bug”) the way he phrases “something down below comes right up and tells you so” and his near epileptic howls of “when you gotta go you gotta go go GO!” suggest a different urge entirely. Even on the jolly homesick seaman cod-calypso of “Water, Water,” complete with suspect semi-Jamaican accent – and the first real recorded evidence that he was looking beyond rock ‘n’ roll on a long-term basis – Steele makes it abundantly clear that by “water water everywhere, not a drop to drink” he’s thinking more of the pin-ups by his bunk bed than being a “teetotal-ARRR!” or of roast beef or fish and chips in newspapERRR!

But none of this explains something like the still startling “Cannibal Rock” which depicts a scenario otherwise left unexplored in pop until “Timothy” by the Buoys. Beginning with Steele cackling “Bubble, bubble, toil and trouble” over improv pots and pans, we get a nearly indescribable ode to – well, the hook goes “din din, tum tum, chin chin? Yum yum!,” and the verses allude to such as Chinese Louie, “who went to pieces.” “Poor Louie,” states a deadpan Steele with perfect timing, “chop suey,” with a relish which might have made even Peter Wyngarde bridle. By the time we learn the fate of MacNamara – “do you like Irish stew?” – jaws are thoroughly agape.

“Two Eyes” is a clear reference to the coffee bar, of course, and Steele’s constant Tommy Two Times vocals – “closer, closer,” “kiss, kiss” – again quiver with as yet unsated desire and the band rocks out with such evident good humour that no one minds the missed cue after Plummer’s guitar solo.

“Build Up” goes yet further; Plummer’s introductory guitar flourish almost invents ska (compare and contrast with the intro to “The Liquidator” a dozen years hence) and is answered by echoes which settle just this side of dub, in which pool Steele’s ecstatic tones ring – “great! Feel great!” – before anxiety yet again explodes into raucous rock, complete with two-note sax/guitar unison, “Knock knock who’s there?” exchanges and an amazing “talking” guitar commentary at the end. The space-filled parallelogram of angularity between voice and instruments here also pre-empts the Police by a generation.

“Time To Kill” is about the build up, so to speak; again Steele’s sexual tension is pantingly evident; he’s got 24 hours to go before his date, and while coconut shells (hello, Jonathan Richman) and a klezmer air to Bart’s melody point forward towards Oliver!, Steele is wondering how he’s going to survive the intervening day without exploding (“Miss the cracks in every stone”). Eventually, time doubles back on itself; the song woozily speeds up and slows down again as Steele’s perceptions alter and eventually he is pushed to falsetto agony, finally settling for impatient patience as the song canters out of audibility.

“Elevator Rock” is wholly a Steele song; back from the sea, working in a department store “at the edge of the town” (subtext: grrr, I want to be in Soho !), he liberally oils the song with double entendres (“Going up sir? Oh you little cur!”) and knows that his three floors will compare unfavourably with Cochran’s twenty flights – but then this is fifties Britain – but he’s raring to go through the roof anyway (“You keep See You Later Alligator, I’ve got my elevator!”).

Then comes the astonishing “Doomsday Rock,” Steele’s second single which didn’t trouble the scorers in between “Rock With The Caveman” and “Singing The Blues,” and suddenly we are in tectonic Frankie Laine-Sings-The-Clash Armageddon territory with a portentous, rubato opening sequence in which Steele solemnly declaims the coming serial catastrophes of lightning, hail, earthquake (“so better forward your mail”), all answered by Plummer’s raised eyebrow of a guitar – before arriving at the darkness of the fourth day, underpinned by Johnny Hawksworth’s bowed bass; the music dims, Steele’s voice is left naked as he carefully pronounces: “the world’s…real…GONE!”

The invocation of the afterlife in “Doomsday Rock” may have had something to do with the presence of the 28-year-old Joe Meek as engineer (and virtual producer) of these sessions but throughout The Tommy Steele Story what is remarkable (as well as Meek’s manipulation of the echo chamber) is the skilled use of space and restraint by the musicians as well as force when required; drums, guitar and sax tend to retreat or hush as Steele comes forward for a highly satisfactory yin-yang balance, and while Steele is clearly tres jejeune in comparison with the UNZIP IT NOWness of a Presley or a Vincent his restrained, as in pent-up, anxiety works in his favour. In addition, close listening reveals the importance of the English folk tradition in setting up this music; there are complex melodic runs and uncommon guitar tunings at work here. But regardless of its antecedents, the album ends on a simple and jubilant celebration of a 1957 now; “Teenage Party” is elementary in construction but Steele’s delivery is devastatingly committed. The listener is left in no doubt that Steele means it, with his plea of “Really stay alive together!” and another subsequent rally of yodels, growls and shrieks; his “rave” on “we’re gonna have a teenage RAVE!” shakes like the earth’s core.” He leaves us with one final fuck the past cry-cum-yodel of “Really stay alive OHOHOH!!” and the instruments collide in one last pile-up, saxophone growling, drums hammering, another future invented.
Posted by Marcello Carlin at 11:59