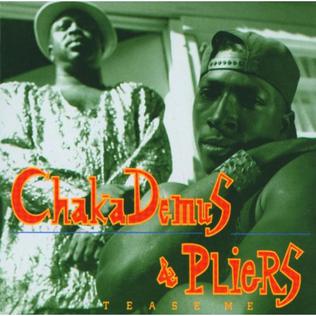 (Author’s Note: The latter two tracks were added to the album’s UK “reissue,” which was the edition which went to number one.)

A real palate-cleanser after yesterday’s cold porridge – and the internet is remarkably free of reviews of Tease Me, even though it has in its own cautiously cheerful way proved to be a lot more influential than, say, entry #510. One assumes that anything which does not fit into a “mainstream,” the template of which is determined by a white, male, guitar-orientated mindset, continues to get routinely dismissed or ignored.

Chaka Demus, the deejay and toaster, is really John Taylor, while Pliers, the singer, was born Everton Bonner. They had worked separately on the Jamaican dancehall scene for years, but after performing together in Miami in 1991, got together as a duo. Their breakthrough 1992 album Gal Wine was produced by the late Ossie Hibbert, once of The Revolutionaries, and his one-time bandmates Sly Dunbar and Robbie Shakespeare took over for Tease Me.

Sly and Robbie had been working towards an electro-fication of reggae and dub for years, as careful listeners to Grace Jones’ Nightclubbing and Black Uhuru’s Red – two of 1981’s most prominent musical twin towers – will confirm, not to mention the duo’s own enterprising works, including 1985’s undervalued Language Barrier and 1987’s explosive Rhythm Killers – “Boops (Here To Go)” spelled out, with attractive, bitonal comedy, the new fusion that was taking place.

Meanwhile, during 1993, dancehall had essentially taken over, and rejuvenated, pop music, at least in Britain. With a top three singles chart at one point comprising Shaggy, Toronto’s Snow and Shabba Ranks, it was a much-needed injection of life into an increasingly moribund, Radio 2-friendly hit parade.

Also included in the top three of around that period was “Tease Me,” the song, one of the most cheerfully askew of that year’s hits, and also the biggest-selling non-number one single of its year, which keeps the listener guessing with its unexpected rhythmic, production and other structural trapdoors but crucially also keeps the foot tapping. It is not quite reggae but assuredly on the way to dancehall. The knowledgeable dancer swayed to it in the same way that they would have swayed, quarter-tempo, to what was then still known as “jungle.” The sampled female “yeah?,” like a cat ready to emerge from the cradle, provided the song’s punctum.

This was readily followed up by a wonderfully shambolic, yet still inherently elegant, take on “She Don’t Let Nobody,” a not-terribly-obvious 1982 Curtis Mayfield album track. Musically Tease Me, the album, is a delight, reviving and renewing, as it does, the venerable Jamaican tradition of giving popular songs past and present a thorough remoulding, in combination with deadly dancehall Exocets.

The album is perhaps at its most endearing when attempting, or meditating on, old-school besuited soul music, or even pop in general. The nightclub crooning of “Let’s Make It Tonight” and “I Wanna Be Your Man” becomes steadily more subversive as these songs wear on, donating the impression of an incomplete, but bewitching, dream of soul. The tonalities are imperfect but heartfelt (midway through “Let’s Make It Tonight,” I randomly conjured up the memory of Vic Godard attempting supper-club crooning back in 1982).

But not a moment is squandered, not even the song “Gal Wine” itself, which (as one would expect) sounds slightly behind the times compared with the rest of the record. “Nuh Betta Nuh Deh” makes joyful hay with Donna Summer’s “She Works Hard For The Money.” “Friday Night” and “Roadrunner” play games with rave-era tropes and bitonality. “Sunshine Day” offers monotonal post-techno crunch.

The pair’s retelling of “One Nation Under A Groove,” with its references to their people having been trampled on for years, and the emphasis on getting down for the love of it, rather than for the funk of it, with the scantest of relations to the original song, is quite masterful. They remember how the old songs went but can only interpret them as they understand the songs in the context of their own circumstances. They improvise like an Andy Bey.

“Tracy” is an astounding piece of post-psychedelic slacker dub; Pliers’ woozy yawns of “UP the road and DOWN the road and UP the road again,” pinballing the vowels to different corners of his peach beach blanket, are reminiscent of J Mascis. Where can she be found?

Their version of “Twist And Shout,” owing much more to the Top Notes than to the Isley Brothers or the Beatles, is simply splendid, as Chaka’s rough, riotous consonants (“Me bawl!”) play pass the parcel with Pliers’ smooth, Ken Boothe-style vulnerable crooning (he almost faints on the “Ohhhhh” of “Girl if you can’t be my lover/Ohhhhh, what would I do?”) and guest singer Jack Radics’ authoritative, stentorian lead, against a party backdrop of Apache whoops and mass barking – and note the subtle presence of a tabla in the song’s latter third, as unobtrusive but as vital as the sitar at the climax of the Beach Boys’ “Cabinessence.” The interpretation brings the evolution full circle as Demus and Pliers rediscover the Latin roots of the original as they gleefully improvise toasts and new lyrics around the central chorus; Pliers’ lyrical nod to Marley’s “Waiting In Vain” in his last verse is almost beyond inspired.

Yet the key songs here are without doubt the mirror images of “Bam Bam” and “Murder She Wrote.” The former is a cover of the 1966 Toots and the Maytals song which threatens violent retaliation if the singer and his people are not treated with basic respect. Pliers sings it, mostly against the drum and bass riff alone, in a ululatory, semi-abstract fashion highly reminiscent of Algerian rai music.

“Murder She Wrote” brings the Toots template up to 1992 date. Pliers apparently worked on the song for fully five years with the assistance of different producers and musicians before hitting on the right formula with Chaka. It is a dynamic piece of music and also a lyrically abominable song, being misogynist and anti-abortion. Not that anybody noticed then, or at least pretended not to notice. I can only proffer the feeble argument that the track’s ineffable and unapologising 1992 nowness sounds as right and relevant now, musically, as it did nearly thirty years ago – you would hear the riff anywhere you went in the more righteous parts of south London. Doesn't make the subject matter any more palatable, and if I'm doing that here then I have failed as a writer.

Most importantly of all, and in common with quite a few of this album’s other tracks, “Murder She Wrote” lays down the template for what is now commonly known as trap music, pop’s recent lingua franca, and given that “Bam Bam” had its origins in Cuban rumba, this completion of the circle is only proper. This tendency has continued and prospered in respect of figures such as Pitbull, Chamillionaire, Daddy Yankee, Jason Derülo. Kardinal Offishall, Stefflon Don, French Montana, M.I.A. & Diplo, and J Balvin – and I confine that list to artists who have, at one time or another, sampled “Murder She Wrote” in their own work. The language of pop was being happily rewritten, or rephrased, which is not something you can say about most of 1994’s number one albums. Respect is long overdue.

Posted by Marcello Carlin at 13:25