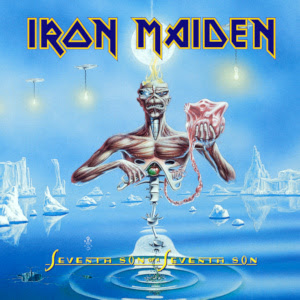 Hip music writers did their damnedest to “rehabilitate” rock music in 1988 but Iron Maiden was a theoretical bridge too far for them. What could have been less “hip” in 1988 than a forty-one-minute prog-metal song cycle loosely based on the writings of Aleister Crowley and Orson Scott Card? Even sympathetic ears recoiled in horror at the presence of synthesisers and damned the project as “too European.” Others cried sellout.

Actually Seventh Son was Iron Maiden’s biggest album in six years because it was also their most focused album since The Number Of The Beast. Besides which, I’m always sympathetic to any musicians who paraphrase Vivian Stanshall (“Moonchild”’s “And the mandrake screamed”), while “Can I Play With Madness” and “The Evil That Men Do” saw the band finally attend to putting together something called a pop song.

It isn’t my universe at all, but holds together pretty coherently and is performed with casual expertise (same line-up as Beast but with Nicko McBrain at the drums). The epic setpieces. “Moonchild” and the title song, proceed patiently through many styles and approaches (the Jean-Claude Vannier-esque choral interlude in “Seventh Son” is entrancing, and the same song demonstrates an equally instinctive understanding of loud and soft contrasts as anything Steve Albini was recording at the time) and I wonder how lauded these pieces would have been had, say, Saint Vitus or Blind Idiot God put them out on SST (Maiden’s “Moonchild” knocks Fields of the Nephilim’s “Moonchild” into the cockiest of hats). “Infinite Dreams” in a different setting with a different singer would be a deep soul classic. And as for the dreaded synthesisers, these seem to be mainly one-note string synthesiser lines played as an adjacent to, rather than being the centre of, these songs; it is hardly Rick Wakeman time.

Bruce Dickinson brings all the record’s diverging strands – fortune telling, spirit mediums, second sight, apocalypse, saviourhood, resurrection - together with a mournful-cum-outraged delivery which puts him squarely in the tradition of Arthur Brown (as the flaming colander atop Eddie’s head on the cover makes explicit) and it’s sad that this piece should coincide with the news of his recently diagnosed (but apparently, and happily, successfully treated) tongue cancer – get well soon, Bruce! As would be expected with Maiden at their best, this music is finally all very silly – and really how sillier is it than, say, So Far, So Good…So What? or …And Justice For All (both in themselves very fine albums)? - but done with the gravest of seriousness. I don’t remember it being reviewed at all in Melody Maker or NME, but it has lasted a good deal better than some of the things that were reviewed in either.
Posted by Marcello Carlin at 12:31