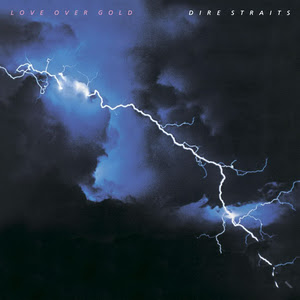 The darkly breaking thunder on the cover – darker even than the beginning of The Prisoner, perhaps dark enough to be hell – could be taken as a gently violent rebuttal to the primary-coloured Fame ethic, which says “Ra-ra-ra, we can do it,” insofar as this states very firmly “No, no, you can’t do it.” As if to underline this anti-comfort, “Telegraph Road” begins with a high-pitched drone strikingly similar to the Human League’s version of the theme from Get Carter, a movie which, as you may recall, was set in Newcastle. Further along the line, or down the endless road, one can easily hear Joanne and Susanne singing “Hard times!” – even if the song is supposedly set in, or inspired by, Detroit. In the background, all the way through the song, you can hear the constant rumble of thunder.

Hence it is an uncomfortable realisation that the 1982 number one album which best reflects the civil degradation of Thatcher’s Britain may not have been made by The Jam, but was a record expensively recorded (in New York’s Power Station) with a seeming view to placating audiophiles – although the album was only released initially on vinyl and cassette, this shiny new artefact called the compact disc would soon follow – and conceived and recorded by a group whose individual members’ roots went back into Wilson’s sixties.

Listening to Love Over Gold now, I am reminded that Mark Knopfler was one of the many guitarists lost in the gold, dying mall of Steely Dan’s Gaucho; from Becker and Fagen he appears to have learned, or had reinforced, the notion of treating a gramophone record like a film set, every angle and shade scrupulously worked out, nothing left to chance. In other, less mindful hands, this could fairly be regarded as an over-careful, suffocating morass that somebody would have to tear to pieces.

But if, on one hand, Love Over Gold finds Knopfler laying down a calling card for consideration of film soundtrack work – the Local Hero music would follow in 1983 – then on the other hand it is a deeply disquieting piece of work, and an unmistakably Northern, and possibly even Glaswegian, record at that; remember that Knopfler was born in Glasgow and raised there until the age of seven before his family relocated to Northumberland.

It is also a very patient record. “Telegraph Road” is not remotely in a hurry throughout any of its fourteen-plus minutes; Knopfler is trying to tell a story about how this man built a house in the middle of nowhere, and the middle of nowhere became a road, and other people came, and eventually a town built up, and then all of a sudden there were no jobs left, so everything closed down and finally the man (the perspective changes mid-song from third to first person) who may have built the original house decides to leave, to move on. Listening to the song now, hardly anything in it seems dated or irrelevant; Pick Withers’ huge – some might say thunderous – drums strike blows of pain when Knopfler sings “then came the mines,” and the singer’s ruminations on a community made to pay the price for somebody else’s mistakes sound depressingly contemporary. Like the protagonists in Springsteen’s contemporaneous and equally dark Nebraska, they are not born to run, but rather running so that they can keep on living.

We also have to take into account that Knopfler achieves a feat rarer in this tale than you might think, in that there are constantly two voices at work; his own voice, and that of his guitar. Each seems to influence or reflect the other, and that level of symbiosis is uncommon, thereby insisting that you take him more seriously than you might otherwise have done. Although as a guitarist he may sound like Clapton, as on the extended solo which ends “Telegraph Road,” he is actually very different; Clapton is an improviser, whereas Knopfler doesn’t really improvise – he has his lines and modes of delivery worked out and likes to stick to them. There isn’t a moment on the record where he doesn’t know what he is doing.

“Private Investigations” was a single, and peaked at number two, so Lena will be assessing its value as a single – a slow-burning grenade reluctantly thrown into a pop chart already congealing back into complacency – whereas in the context of the album it is very much a part of a wider and broader structure. Musically it strikes me as a halfway house between Brel’s “If You Go Away” and Zorn’s “Spillane” – like “Telegraph Road” it begins with an introduction so dark and quietly intimidating that you half-expect Scott Walker to emerge from the fog (and it is therefore little wonder that Knopfler, who at the time shared a manager with Walker, should turn up at the end of Climate Of Hunter, picking a blues while Walker funnels Tennessee Williams’ “Blanket Roll Blues” through to the next universe: “I took no one with me/Not a soul”) – and the vocal is bitterly muttered rather than sung. Is this really just a jaded, hungover private detective, or the manifestation of a greater ruination (perhaps even “the sixties”)? Halfway through, the voice absents itself, or changes to guitar, as Portishead splutter into life in the background and the investigator tries to get out but finds every which way blocked; it is as if there are things he does not want to see which, if he sees them or finds them out, will just make his life worse.

“Industrial Disease” is adjacent to New Pop in a manner of speaking – how many proto-yuppies were taken in by what sounds like a jolly novelty song, with its comedy Harley Street doctor and requisite jerky New Wave organ? In fact it turns into a pretty bitter denunciation of what Thatcherism did to Britain; like “Private Investigations,” every escape route appears to double back on itself. Withers’ drums are as huge and violently enveloping as David Palmer’s on Lexicon (this was another in Phonogram’s remarkable 1982 line of striking albums). Dylan is the principal inspiration of course (“Subterranean Homesick Blues” in particular) but doing “Dr Parkinson” Knopfler sounds more like Vivian Stanshall, and by the time he reaches the two Jesuses at Speaker’s Corner (meanwhile anticipating Edwyn Collins with his “There’s a protest singer singing a protest song”) he sounds rather like John Lydon.

The title track is a sort of refraction on “Private Investigations,” incorporating some of the same musical material; I note that the song’s root key is the same as that of “All Of My Heart” and that its subject matter is not dissimilar; the aspirational sensation-seeker who keeps ending up in the same place and never learning or growing until they realise that they have to understand themselves and learn to take a risk (this issue is further explored in the song “Private Dancer” which is previewed here in the middle-eight; a version was recorded, but Knopfler decided that the song would sound more convincing if sung by a woman, and so eventually gave it to Tina Turner). The music here is ominously lovely, with an inspired descent of a bridge which reminded me slightly of the forgotten Hot Chocolate single “Emotion Explosion,” and Mike Mainieri’s sublime vibraphone, quietly taking the song out over its long, dissolving fade as Singleton’s saxophone did on “All Of My Heart.” In addition, there are very light intimations of the type of musical thinking that eighteen months later would become apparent in the work of the Smiths; again, musing on things that most people would prefer not to think about (“Suffer Little Children” being the most obvious example). I also think of Herbie Hancock’s sublime entry halfway through Simple Minds’ “The Hunter And The Hunted”; like Knopfler, Jim Kerr is very concerned about the geometric structure of his songs, and so the summer-slowly-bleeding-into-dark-autumn precision of New Gold Dream – look at those years, those numbers; there’s still a future! – is nicely balanced by this very laidback, patient and fluid keyboard solo which appears to have walked in off the street. To remind us that humanity will persist in thriving.

The final song – five songs cover just over forty minutes, but it never really feels like such – is Dylan again, and (reasonably) uptempo, but the song goes beyond “Positively Fourth Street”-type elongated other person demolition; no, Knopfler appears to be issuing damnation to some negative force that uses up and consumes people and hopes. The music is heavy, and steadily becomes heavier, without becoming metallic. By the time Knopfler gets to the song’s climax – “You thought that you were never coming down,” he intones before the horrific ending, to which his guitar responds with a fussy single-note descent, as though slipping back down Everest – the anger can be tasted, and the organ-dominated coda, drenched in lots of phasing, seems almost to want to bring Emerson, Lake and Palmer back from beneath its fashionable cover; as though the group are manfully struggling to resuscitate what they remembered from the sixties, or the early seventies.

The moral may be nothing more than “say what you see; depending on how you say it, you might be able to change people’s minds.” But Love Over Gold stares the abyss in its face in a way which Dire Straits never really tried again. No, you’re not going to live forever; no, other people will get the fame depending on circumstances you can never hope to control. And still the sky is dark, and light; those daunting shadows over a less than wonderful land.

(Additional recommended listening from 1982: Martin Carthy’s Out Of The Cut; his “Reynard The Fox,” done for just voice and acoustic guitar, is one of the most frightening pieces of music ever to come out of Britain, a sight that perhaps even Knopfler baulked at wanting to see.)

Next: Then Play Long explained.
Posted by Marcello Carlin at 18:36