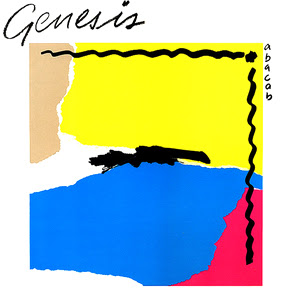 It could have been called Another Record, with its closing pleas for an old rock and roller to be taken in, and maybe it would have revealed its true intent that way. Or it could have been called Our Elusive Dreams, since at least three of its songs deal with a mysterious “it” and/or “he” and the record as a whole seems to be concerned about concealment, hidden visions, covered identities, deceptive pictures.

But it was called Abacab, and it probably owes its place here to astute marketing; the album was released in four different sleeves, with the same basic cover design shuffled around and a different predominant colour on each – and I am certain that many fans saved up to buy all four. What isn’t clear from its furiously mixed grooves – this is amongst the most forward of production jobs on any 1981 album (credited to the band themselves, although the input of nominal engineer Hugh Padgham is clearly audible) – is what Genesis might still mean in 1981. This had already proved to be a problem eighteen months before with Duke, and it was a problem the band appeared determined to tackle. They were apparently very ruthless about junking any songs that sounded like “old” Genesis, although both of the big setpieces “Me And Sarah Jane” and the “Dodo/Lurker” medley seem umbilically tied to 1975, not to mention the continuing problem of Tony Banks’ archaic-sounding keyboards.

It is a difficult album to appreciate, let alone love, because it seems so deadset on not telling us things. Just under half of the album – the four songs released in various parts of the world as singles – is extremely listenable, while the rest can hardly be listened to. But if the title track makes no particular lyrical sense, other than a sense of increasing, numbing paranoia, then its prog-funk strut, with complex crosshands stuff over a basic 4/4 rhythm and one-note bassline, sounded entirely logical and attractive as a single in the skyscraper context of “Tainted Love,” “Prince Charming” and “Souvenir.” Like “Turn It On Again,” its unapologetic determination sets it apart, and it remains listenable – and danceable – even when the band break off from the song for a long jamming fade, with Banks doing a passable Joe Zawinul impression (as 1982’s Three Sides Live would prove, the song, and the album as a whole, seem to be a template for development in a live setting).

“Abacab” – which really isn’t the song’s structure, as Mike Rutherford cheerily owned up – sounds modern. So does “No Reply At All,” although with its Earth, Wind and Fire horns crisscrossing Phil Collins’ high-pitched angst, it could easily be mistaken for a Face Value outtake until one hears Banks playing what sounds like the riff to “Marquee Moon.” But it is not quite – at least, not until the “Listen to me, you never listen to me” climax – a song about Collins’ marital problems. He is sitting somewhere, staring, looking at someone, and getting no response. It could be that the other person is so spooked out by this weird guy staring at her and saying nothing that she is thinking of calling the authorities, but he becomes increasingly frustrated, to the point where you wonder whether he is not sitting and looking at the listener (“The buck stop here. It’s not the one you’re looking for.” It?), daring them to respond to what he is thinking (“Do you think I’m to blame?” he has already asked, several times, on the title track). Musically it’s supple and brisk with a nice midsong vocal/piano interlude before gradual rebuild, but it doesn’t put any listener at ease, or rest.

“Me And Sarah Jane” is a Tony Banks song, and almost impossible for me to penetrate. Did this “Sarah Jane” ever exist (“I invent a name”)? More memories of sun and happiness, more (“same old”) crowded rooms, the decline of modern society (“And now the city lights are dimming one by one/It costs too much money to keep them all on”) – with apparently some sort of cathartic resolution (“We weren’t afraid”), but the music is a sloppy blend of outdated prog and 10cc’s idea of reggae. It’s the same story with “Dodo/Lurker” – is this their sideways tribute to Bob Marley, or (as is more likely) their attempt to be like that Police off the telly like? The lyrics speak of extinction and regeneration, and perhaps it’s a projection of how they felt they stood in the eighties – a rusty old prog tub, ready for the seabed scrapheap – but lyrics like “Too big to fly/Dodo ugly so dodo must die” and, worse, Banks’ Chad Valley synthesiser doing what sounds like impersonating a dodo, erode any residual sympathy and really remind the listener of why Dr Feelgood had to happen.

“Keep It Dark,” in contrast, is a terrific and somewhat menacing song with its 12/8 thud and bright prog synths alternating with brutal breakbeats, and I think yet another exercise in self-perception; the protagonist comes home, having disappeared for a few weeks – he was kidnapped by aliens and saw a bright, shining new world, but who will believe him? So he invents a yarn about being kidnapped and held hostage for money. An ebullient “No need to hide” fights a muttered “Keep it dark.”

But the song’s subtext is more significant. It appears, in structure and intent, to be a reproach to dark post-punk modernism, suggesting that the band’s time, and by extension the music that went with it, was…better, brighter, more hopeful, had more to say. But in 1981, you don’t want to hear about cities of light or hearts full of joy, “you” just want bash bash crunk crunk “realism” because it’s more “modern.” Make of that what you may.

“Who Dunnit?,” however, their attempt to take New Wave head-on, is a bit of a mess, with Collins yapping the largely nonsensical crossword puzzle lyric in a bizarre Cockney accent – but Phil, you’re from Chiswick! – over various semi-random bits of Devo/Eno/XTC business. “Shut Up” by Madness, a new entry at #22 in the singles chart the week Abacab went to number one, said the same thing so much better. “Man On The Corner,” powered by what the legendary music writer Patrick Bateman called a “riveting drum machine,” is better because it doesn’t try so hard. This is Collins’ song alone and clearly an early tryout for “Another Day In Paradise” – but could the man shouting on the corner be the subject of “No Reply At All” or even Collins himself, alone and confused?

In Rutherford’s “Like It Or Not,” Collins gives his most aggrieved and aggressive vocal performance on the record; again, he is someone who doesn’t know (doesn’t know what?) and even puts someone “out on the street” (to talk with the man on the corner?). Lyrically the closest that the album comes to the pain expressed in some parts of Face Value – all the more remarkable, as Collins did not write it – he curses, rebuffs and finally mourns for himself. “It’s been a long, long, long, long time/Since I held anybody/Since I loved anyone,” Collins wails, and one has to ask: are you particularly surprised? Note the “You’re just another face/I used to know” line and how it simultaneously looks back to Mod (“I’m The Face”) and forward to Gotye. He’s come home and she’s not there, so he tries to dismiss her roughly from his mind, but it’s no use; he’s alone, left with his murmurs, his vulnerability and maybe his stupidity.

The closing “Another Record” features an ominous keyboard introduction which sounds like Portishead ought to sample it, but this abruptly switches to a more conventional midtempo setting. Here Collins sings of another man out on the street, abandoned, but he’s an old rock ‘n’ roller, and won’t somebody help him (out), and take him in, and play that old record that “we” like, over and over? The sentiments are not helped by the arrangement, which with its chirpy synthesised harmonica sounds like a forecast of Howard Jones and Thompson Twins nightmares to come. And Banks’ incongruous pub piano. More self-referentialism (don’t leave us old prog ‘uns out in the cold, you young New Semantics you!)? If it is, then it is not convincing, and leaves one with the feeling of a version of the Police with three Stewart Copelands. The “newness” seems largely cosmetic, and even the shorter songs tend to be a little too long. They don’t really know what they want to be, this 1981 Genesis, and by the time they return, Abacab will, against all expectations, sound like Revolver compared with the follow-up. Not that this deterred students eager to spend their grant money on this conveniently available record, but it still isn’t quite what a lot of 1981 was searching for.

Next: There must be another way.
Posted by Marcello Carlin at 17:05