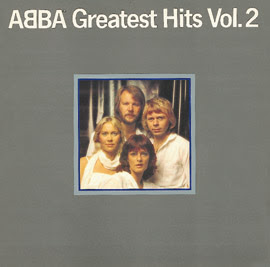 (“Fernando” Update: not on here either)

The story of the seventies: from campfire folkies to multinational operatives. Or, judging by Frida’s expression on the front cover photo or in her quarter of the composite photos on the inner gatefold sleeve, both of which more or less say that she’s too old for this shit, you may recognise a disillusionment with what the Swedish call “lagom.” The dictionary definition of this is: “enough, sufficient, adequate, just right.” Virtue in moderation. Make do and mend. “Just” right, “just” the right size, the right amount. The thing is, Abba want more than lagom can give – “I can’t take it for too long/My impatience slowly creepin’.”

The inner sleeve of their second Greatest Hits collection betrays nothing beyond yet more variants on the blue pyramid of Voulez-Vous - as opposed to Gary Numan’s red pyramid – and overall the record was perfect fare for casual Christmas buyers, largely mopping up a ragbag of stuff from the group’s three previous albums, not all of which were singles and the selection of which begs only the question: why only the first two parts of the Girl With The Golden Hair suite, and out of sequence? Are they trying to will into being a world where “I’m A Marionette” never happened?

Only three songs here are hitherto unaccounted for, and of these not much time needs to be spent on “Rock Me.” Why this 1975 relic of something Abba had long since left behind, with Björn growling over a stock sub-Motown backdrop as though he were Stockholm’s Alice Cooper (the answer is a prosaic and pedantic one; it was released as a single in Australia and New Zealand after the first Greatest Hits volume came out, and also was inexplicably still in their 1979 stage act)?

This leaves the two stand-alone singles which they released either side of Voulez-Vous, both of which put that record to shame. “Gimme! Gimme! Gimme!” saw them finally and firmly grasp disco and the oncoming eighties, with a vocal that exudes deep dissatisfaction with lagom. The introductory guitar line could have come off the third R.E.M. album, and then the uniquely Swedish melody – panpipes synthesised for Studio 54 reuse – makes its way through.

What is remarkable about both Agnetha’s vocal and the lyric is that she sounds obviously distressed, perhaps on the verge of a breakdown (“No one to hear my prayer”), and the lagom of watching late night TV and reading about megarich film stars isn’t nearly enough to make her feel fulfilled. But what she significantly doesn’t do is go out and try to find somebody. It is almost as if she is exulting in her misery, extolling the perceived virtues of loneliness (note how, when sampling the song, Madonna used “Hung Up” as a song about a relationship ending). Either she is sufficiently stifled not to want to step outside her front door, or it is an early manifestation of the imperial isolation of the protagonist of Leonard Cohen’s “Waiting For The Miracle.” Whichever way, as a piece of music it’s compelling and yields enough insecurity for the song and record to work as three-dimensional pop.

Whereas “Summer Night City” was, even in 1978, so ahead of the rest of the pack it was embarrassing. It notably wasn’t a particularly big Abba hit; misunderstood as an attempt to cash in on disco, it peaked reluctantly at #5 in Britain as a single. Yet its very pores show how good a grasp Abba had of the symbiotic mechanics of dance and pop, including the full-length version (sadly not present here) with its florid orchestral string introduction and a melancholy Björn chewing over “scattered driftwood on a beach.”

Then the beat fuses into action, and everything about the song, from its subtly delayed rhythms via the brilliant and naturalistic major-minor yin-yang of melody and harmony to the genuine fourplay of intermingled female and male vocals, is completely assured and sounding nothing like the seventies and everything like the eighties (and yes, they are singing “Walking in the moonlight”). Life in the day is humdrum, but come the night, the disaffected are drawn to a “giant dynamo” which gives them exactly what they want, what they maybe had always dreamed of. “It’s elusive, call it glitter/Somehow something turns me on” they sing, but then comes the giveaway:

“Some folks only see the litter/We don’t miss ‘em when they’re gone.”

Chew over that “we” for awhile and reflect as the next day dawns (the song, lyrically, is the exact reverse of “Mr Blue Sky”) – and what is there? “Nothing’s worth remembering/It’s a dream, it’s out of reach.” Perhaps there was never anything there except a beach with driftwood scattered across it; perhaps the whole thing was dreamed, like the seventies, like pop music. The unasked question being: where does everything, including “us,” go next?

But, before “we” abandon the seventies altogether, there is one slight matter to sort out.
Posted by Marcello Carlin at 17:03