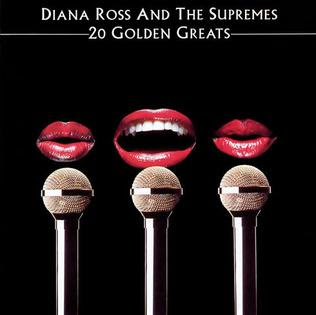 Not all of EMI’s Golden Greats series have survived onto CD. One look at this highly regrettable cover should tell you why EMTV 5 did not get an upgrade (actually, the cover was revived in 1998 for a 2CD set entitled 40 Golden Motown Greats which is most assuredly not the same album as this one, and indeed loses some of its most vital tracks; the album remains in print but the cover was discreetly changed). Although it is our duty here at Then Play Long to bring you as many of the original album covers as possible, just so you can see what they looked like, this is the cover I’m most ashamed of putting up since the Blind Faith album – and perhaps tells the curious outsider more about 1977 Britain than they strictly need to know (and this was not even the worst offender in the series; EMTV 6 we’ll be getting to soon enough, but EMTV 7 was the optimistically titled and horrendously designed 30 Golden Greats by our old friends The George Mitchell Minstrels, an album which, happily, will be no concern of this blog; and no, you can’t get that one on CD either).

Far more intriguing is the inner sleeve, and if you encounter this record in your local charity shop, you should make sure you pick up a copy with the original inner sleeve, advertising other Motown records of potential interest to purchasers under the umbrella title “THE MOTOWN COLLECTION.” Alongside firm favourites from the likes of Diana, Marvin, Stevie, Smokey and the Commodores, we have curious items like Jermaine Jackson’s Feel The Fire, the cover of which must surely have helped inspire that of Hot Cakes, the riotous new album by comedy rock band The Darkness; In My Stride by David Ruffin, who looks hip and happy on the cover even though he is in imminent danger of falling sideways into the street; and the unspeakable Musical Massage by Leon Ware. Now maybe this album is a lost masterpiece that has been sampled ten thousand times – not being a “record collector,” I wouldn’t know about such things – but all I can say about the cover is that it must have inspired the twenty-year-old Tim Westwood in ways we really don’t need to investigate in any sort of depth.

But, anyway, the Supremes; Motown’s prize act of the sixties, Gordy’s number one priority, and thus the act which got the pick of the creative juices flowing in and around Hitsville, U.S.A. Their total of twelve Billboard number one singles in the sixties was equalled only by the Beatles, and never surpassed, although I tend not to think of them as “Black America’s Beatles” – that is a title which would more aptly belong to The Temptations – but as Black America’s Beach Boys, and not simply because they sing “Good vibrations” all the way through “No Matter What Sign You Are”; they were a template for increasingly audacious experiments in soul-pop which never lost track of their original spirit, as hard as Diana Ross might have tried to do so. In fact, although Ross was never going to be anybody’s Queen of Soul, her imperfect voice was ideal for the Supremes’ records, allowing the experimentation to filter through while not overpowering her records with her personality.

The first thirteen of these twenty tracks – including all of side one – are about as perfect and breathtaking as pop gets, bridging the gap between two different generations and philosophies of girl groups. “I Hear A Symphony” is as good an argument for not jumping off Vincent Thomas Bridge as any I can think of. The use of the vibraharp on “Love Is Like An Itching In My Heart” is comparable with Gary Burton’s Lofty Fake Anagram. The thing is...I’ve already written about these songs, in entry #52 to be precise, and some three years after writing that, I see no reason to alter or reiterate my views. Indeed, some readers may be surprised to learn that entry #52 is the third most popular entry in this tale to date; only two other entries have achieved more “hits.” I’ve no idea why this should be the case, but clearly I do not wish to meddle with a proven popular piece of writing. Of the later Supremes tracks here, I have dealt with “Love Child,” “No Matter What Sign You Are” and “Someday We’ll Be Together” in the context of various Motown Chartbusters compilations. This means that there are only four tracks to write about here, and the unwary reader is warned that this will regularly recur in future years; recycled or re-ordered compilations about which there will be almost nothing new to say. Those wishing to know why the hits were so important are referred to the original entry.

Of the four tracks still needing rounding up – as though writing about music were rustling – none was an especially major hit, but all are redolent of the same insolent invention present in the better-known Supremes tracks. “In And Out Of Love” ambles along deceptively like a Nancy Sinatra number, only to be quickly detoured by Holland-Dozier-Holland’s characteristic labyrinth of unexpected chord changes, such that the group momentarily encounter orchestral chords that might be better expected to climax a Roy Orbison ballad (“Can’t seem to find that everlasting love,” muses Ross). But in “Forever Came Today,” everything springs into blossom; now Ross is bolder, more confident – note how the orchestra swells up behind her declaration “I know that we had laid the plan for everlasting love – at last, at LAST!” The arrangement brims with originality; stately muted trumpets, baritone sax, electric piano, tambourine, and – buzzing throughout – a theramin. The song takes the pain of “Reflections” and turns it into joy.

“Some Things You Never Get Used To,” written by Ashford and Simpson, finds Ross on the verge of a breakdown; the castanets leitmotif seems to mock her anguish, only for a harp to hopelessly cascade the strings into the studio on the gasped line “I thought I saw a glimpse of you.” Elsewhere, Ross giggles, chides herself, mutters – and for one world-suspending second, the song stops altogether. Finally, “I’m Livin’ In Shame,” written by the same team responsible for “Love Child” (Pam Sawyer, R Dean Taylor and Frank Wilson among them), tries a little too hard to be a follow-up but acts as a nice self-mocking turnaround for Ross, being essentially an update of the Shangri-La’s “I Can Never Go Home Anymore”; Ross, ashamed of her mother’s one dirty dress and vulgar lack of manners (“Never used a fork or a dinner plate”), tries to hide her existence from her “uptown friends.” As she gets on in the world, her mother appears to have gone nowhere – not even using the ticket to a holiday in Spain that Ross bought her – and, worse, is completely unaware that she is a grandmother (“She had a grandson, two years old, I never even showed her”). Inevitably, she dies alone – while making some “homemade jam” – and Ross suddenly realises how vapid, hypocritical and scummy her own life has become. “Mama, I miss you,” she murmurs blankly, more blank than Connie Francis at the end of “Together,” while strings and harp patiently wait for the seventies to happen. The album, if not its cover, is, at its best, as good as albums get, but you do feel towards the end that Ross gets somewhat distracted, waiting to go out there alone, and be her own star. In the seventies, it was the most common of stories.
Posted by Marcello Carlin at 22:40