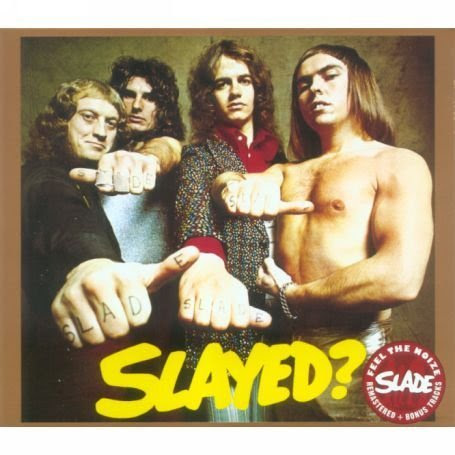 “I gotta try a lot of new things today,
And I've got, got, got a lot of things I'm not”

Slade didn’t come up with the concept or the song of “Rock ‘N’ Roll Part 2” – and, whatever you might now feel about the co-writer and performer of the latter, it was quite the concept – but the belief flows through their wires and comes out in a laughing burst, just when it was needed. As 1973 begins, so does glam rock on Then Play Long begin proper, and if Slade’s notion of glam owes far more to the Crazy Gang than Christian Dior, that simply shows the width of glam’s church. Everywhere on Slayed?, their fourth album, there is the loudly warm feeling of something new being created; there probably hadn’t been such a declaration of good times on a number one album since Please Please Me.

Always the (in)sensible pop to their mirror image Led Zeppelin’s rock – when Slade strayed into Zep territory, for example on “My Life Is Natural,” they struggled – Slade also stood for a defiantly British, and slightly less defiantly male, working-class culture. “Music to wreck concert halls to,” exclaimed a delighted NME in their review of Slayed?, and this album’s predecessor, the bloodily red Slade Alive! demonstrates just how explosive, and yet also how tender, they could be with their audience. Concert halls were indeed routinely trashed when Slade played in them, and the overall atmosphere was directly correspondent to football culture, which maybe explains why the group, despite much effort, failed to break the American market. The ten songs of Slayed? are ebullient, lively and driven, but they are also as solid as a pint of bitter or a plate of steak and kidney pie – two more concepts with which the USA was unlikely to bond. Add to that Noddy Holder’s near-incomprehensible Wolverhampton screeches pretty much all the way through the record – Lennon only managing sustained primal screams on two songs on Plastic Ono Band, and Holder is about the last person I can imagine needing therapy of any kind – and Slade’s rock is, for those who don’t know or can’t feel it, as twisting, if as impeccably logical, an abstraction as AMM.

“Mama Weer All Crazee Now” – developed from a series of vocal ad libs by Holder during the recording of their previous single, “Take Me Bak ‘Ome” – served notice that the seventies were going to be a different story. Half a decade previously it had all been about brotherhood, peace and meaningful coexistence. By now it seemed to have become all about getting blotto, having an empty wage packet by ten o’clock of a Friday evening and…meaningful coexistence. Every generation finds its own way. Holder gives the werewolf howl at intro and outro of “Mama,” and there is an unsettling franticity about his equation of sex and drink (“Don’t stop now/Oh come on/Another drop now/Oh come on”) and even a conjuring up of Johnny Cash darkness (“Fool firewater won’t hurt me”). By the time we reach the choruses (“Whee!” and “Whoo!” yells Holder in the second chorus as though somersaulting atop a helter-skelter) the celebratory air becomes almost inhuman – we’ve all gone crazy now – and the rhythmic balance, as always with peak Slade, is intriguing; bassist Jim Lea and drummer Don Powell scarcely bother with foursquare rock rhythms at all on the record, preferring to swing in carefully layered fractions of triplets and off-the-beat 4/4, a division of rhythm not dissimilar to that deployed by jazz drummers such as Elvin Jones and Tony Oxley; the beat is almost never on the beat, and so there is a surprising lightness of counterpoint to the heaviness of Holder’s voice and Dave Hill and Holder’s guitars (Hill’s solos throughout are functional, although he reaches for B B King via Eric Clapton vulnerability on “I Don’ Mind,” a telling contrast to his deliberately extrovert “Superyob” persona on stage). Then, as “Mama” reaches its climax, the jackboot chants of “Mamamamamamamama” become oppressively staccato, and Powell’s eight-to-the-bar bass drum hammerings combine to form a strange precursor of Acid House; the group, and its audience, have been taken out of themselves, have exceeded themselves.

It was a deserved number one, and its follow-up “Gudbuy T’Jane” was unlucky to be kept at number two by “My Ding-A-Ling.” Honing their rhythmic expertise further, Lea and Powell shuffle in a manner virtually unequalled anywhere else in the pop (or rock) of their time; the plaintive bootboy guitar intro prematurely announces Oasis, but unlike Oasis, Slade have “rebop,” so that their train always seems to be steaming along as Holder stutters out his “She! She! She!”s like a rejuvenated Roger Daltrey. The trademark bootstomps and handclaps return at the end, but apart from those, and presumably some guitar overdubs, both song and album sound more or less “as live.”

The remaining tracks do not let down their distinguished company. Powell’s drums open “How D’you Ride,” and the album, with their peculiar mix of marching band and bluebeat, before Holder’s Largactil gargle thunders into view and tambourine and ride cymbal bolster the choruses. “Can’t you see that we’re gonna need no revolution,” shrieks Holder, “just to get the good time message today?” He rattles out four “Oh!”s, each escalating in register and intensity, and Powell’s four-to-the-floor takes the song out. “Listen now! LISTEN!!” warns Holder at fadeout, and we can hardly bring ourselves not to do so.

“The Whole World’s Goin’ Crazee” demonstrates that Slade, despite being Zep’s chuckling cousins, probably owe a lot more to Creedence than anyone else; Holder’s voice has always struck me as being far closer in sound and intent to John Fogerty than to Lennon, and “Crazee” – essentially Slade’s manifesto (although Holder warns, “Forget you’re on a mission!”) – sets it up; they are a rock ‘n’ roll band, here just to make us and the world happy (and probably get the world dancing a lot more purposely than the contemporary likes of “Price Tag”). There’s such a feeling of generosity about song and performance here; how long had it been since any British rock band had expressed such simple joy over their ability to get people on their feet, dancing and having a stoopidly good time? “Get rid of all the blues that you have saved!” cackles Holder – the time for mourning, quietude and stifling “respect” has passed, the word is now to get up and “rock and RAIIIIIIIIIVVVEEEE!!!.” “I said yeah? YEAHHH!!” Holder roars. Six “CRAZEE”s per chorus rattle out like a soda-filled AK-47. By song’s end, Holder is screaming for life, like the positive flipside to Lennon’s “Cold Turkey” – these are the “OHHHH!!!”s and “AAAAHHHHH!!!”s of freedom, of renewed life.

Even when they do bitter regret, as on “I Won’t Let It ‘Appen Again,” it sounds joyful, with undulating tambourine and bass virtually cancelling out the drums, until Hill’s unexpected multitracked guitar eruption rises up at the end like a struck electricity substation. Their take on Janis Joplin’s “Move Over” starts with a “Dance To The Music” beat. A vocal and bass unison gives way to thrashing guitar and an even more thrashing performance from Holder. “Make up your mi-i-i-innnnnaaahhnnnnddd!” he repeats throughout. A brief instrumental diversion cuts up the song’s rhythms like Bogshed or Big Flame would do a dozen years later. Holder’s “No no no, NO NO NAOOWWWW!!” is broken up by Powell’s stabbing cymbal, which, along with bass and voice, signals a doubling of the speed. Now they sound like The Gossip (which, if you think of a road that leads from Janis Joplin to Beth Ditto, is entirely fitting – and yes, there are many other roads leading from Joplin, and one of them culminates in a different Beth, but that’s another journey for another entry). “Do it ta MEYA!” squeals Holder against Hill’s effusive ejaculate. “Oh, let me beeeeee! AWWWWOOOOAAAHHHH!!” Holder climaxes. Where Joplin’s original had her singing-cum-rapping about being treated like a mule, Holder’s objective is far simpler; he just wants her to make up his mind because look where it’s all flooding out otherwise.

“Gudbuy Gudbuy” is not an appendix to “Jane” but begins with a thoughtful midtempo groove before unexpectedly turning into a sea shanty. “I had to come BACK without your warning,” chimes Holder over nicely unpredictable harmonic tightropes and a churning shakermaker undertow; but, as the song reaches yet another (milky?) climax Holder’s “BYE BYE” leitmotif becomes more and more demonic. “I Don’ Mind” sets out as a slow, tick-tocking “Yer Blues” wannabe before moving into a manic faceslap of a chorus (“Goin’ up an’ down an’ all around”). But this is the record’s most disturbing song, Holder putting himself in the character of a thug and/or his victum. “My star sign was too good for you,” he says, bizarrely, against Powell’s triple-bashing cymbals. “I danced on your face/It seemed the best place,” goes one of the refrains. “Am I being cruel? Am I being cruel?” Is he kicker or kickee? Meanwhile the music evolves through a subtly slowed down Bill Haley drum pattern, Hill’s angst-ridden guitar solo quivering with fear; the picture of a time without the subsequently-garnished rose petals of selective amnesia.

The whole is taken out by a Shirley and Lee fifties medley, which finds Lea, astonishingly, essaying the riff of the Velvet Underground’s “European Son” on his bass. Hill’s solo goes into a cyclical pattern which may betray familiarity with Shuggie Otis’ original “Strawberry Letter 23,” before everyone pulls together to rouse the record to a triumphant ending, Powell not forgetting to take down the temperature with his drums at the end, much as one would check that the gas was turned off before leaving the house.

If Bolan was the aristocrat of glam, then Slade were the gamekeepers with a yearning to be poachers; Lester Bangs once described Holder as a “Silas Marner constipatee,” and although Holder’s reputation as one of the most powerful, and certainly one of the most loved and cherished, of British rock singers is solid and entirely justified, it has to be said that he was perhaps the least sexy rock superstar Britain has ever known (apart from those with a fetish for Lawrentian rogues, rather fitting for this industrial, and industrious, Midlands band; Lea and Hill were the group’s pin-ups). But his power (Little Richard times Pi times the league tables) and instinctive good humour ensured a deeper love on behalf of his fans. Slayed? is not entirely free of quiet dread; apart from “I Don’ Mind,” there is a track, “Look At Last Nite,” which already anticipates the end of fame, of celebrity. “Maybe they’ll care today, but not tomorrow,” sings Holder, and the song is a regretful reshuffling of the “’Coz I Luv You” template. Lea performes a bass solo against Powell’s fencing drums, and Lea’s bass subtly carpets Holder’s increasingly desperate howls at fadeout. But, for the “now” of early 1973, the record provided exactly what “we” needed; good times, big beats and, above all, the promise of an already-achieved release. Much as everything has to build from hydrogen, so did Slade, and the rest of glam, have to build from what already existed as rock, but following the oddly-tinted nostalgia of recent TPL entries, Slayed? builds a new structure on their foundations, and finally it feels as though things can move on after a prolonged period of mourning disguised as meditation. The beginning of Part 2.
Posted by Marcello Carlin at 13:55