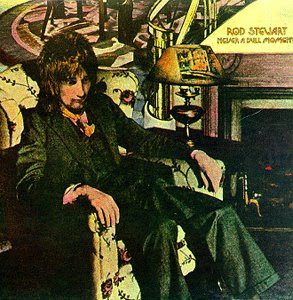 He greets us as though sending an annual familial round robin letter, “a year on, a year older, and perhaps a little more well endowed.” He has gone up a little in the world since last we met him, although whether he is happy in it is another question; he is sitting in the midst of a swirling Art Deco home of impossible dimensions, clearly rather the worse for wear on account of the falling-down water. Outside the solitary window – and what are the dimensions of this place? – there is a palm tree, and maybe a beach, but it looks windy, perhaps even hurricane force. Or are the pools the reflections of his own belated tears?

No sign of any of that self-doubt on the multiple inner foldout sleeve, however; there he is, leaning against the goalpost with most of the rest of his makeshift team, his faithful retinue, “Stewarty” with “Woody” and “Laneole” and the others, pretty much all returning from Every Picture (although Ian MacLagan and Kenney Jones, we are informed, “decided to stay in bed”). Elsewhere Stewart is entertaining a huge crowd at a stadium (the words “GOOD EVENING” flash up), interacting with Ronnie Wood, getting everyone going; it’s a family affair, again, and much better than the imposed solitude of “something better.”

He considers his imminent plight on the opening track, “True Blue”; true, we can nod smilingly at his determination never to be a millionaire or own a racehorse or private jet with the hindsight of knowing that he will get to achieve all of these, and more besides; here, however, the beat is righteously pulpy, MacLagan’s juicy Fender Rhodes pulling weights with Jones’ punchy drums (all the Faces are on board for this track only; elsewhere, Micky Waller makes a welcome return to the drumkit) while Ronnie Lane’s bass is extravagantly inventive. Jones offers a cynical triple drum triple in reply to Stewart’s “I’d better get myself back home” (yes, even in 1972, this question has not gone away). After his “Maybe I’ll never, ever decide,” huge purple gulfs for electric piano and bass open up before Wood’s guitar revs up (in response to the first of many “Whoo!”s from Rod) and the track then speeds up. “Gotta get home as soon as I can!” the wayfarer yelps. The track speeds up some more. “Oh yeah, oh yeah!” Straight out and down the track towards the fade, but not necessarily towards “home”; after all, as he says, “Back home I’m considered the fool.”

Indeed, on “Lost Paraguayos,” with the expected delicate acoustic introduction, Stewart seems more interested in escaping the rain, the continuing poverty (“Put another chair on the fire”) and going to South America (“Darling, I hate to tell you, but I think I’m catching a cold” is one of the great opening song lines). But he’s leaving someone behind, and someone with whom he really shouldn’t ought to be, given the references to her “ridiculous age” and the possibility of being incarcerated in a Mexican jail. “You know I wouldn’t tell you no lie, heh heh heh heeeehhh,” sniggers Stewart (and no, I don’t think anyone would get away with this nowadays). He calls for Waller’s drums to fill the picture (“Hurry up, or I’ll get pneumonia!”) and they burst in, Wood (here on bass) inspirational. “No lie, oh yeah!” hiccups Stewart as loping Brotherhood of Breath horns slip into the picture. “Goodbye honey, I know it ain’t funny, WHOOOO!!!” If Freddy Cannon had made Exile On Main Street he might sound like Rod here.

Then the Dylan cover, “Mama You Been On My Mind” (at that point, recorded by Johnny Cash and Joan Baez but not by Dylan himself), sets us back in Brit Flying Burritos land, with careful pedal steel (Gordon Huntley, on loan from Matthews’ Southern Comfort), dovetailing with empathetic “chest piano” (i.e. accordion, credited to someone simply listed as “Brian”) and Spike Heatley’s extraordinary double bass lines as Stewart wonders, over a “Maggie May” medium tempo, where he stands (apart from the “crossroads”); he’s thinking about someone and missing her, he’s too proud or dumb or smashed actually to want her back, or even call her (“Please understand me, I’ve no place, I’m calling you to go”); he avows that he’s not pleading, or pacing the floor, even though the dried juice in his vowels betray that that’s exactly what he’s doing, even if only to himself (“I’m just whispering to myself so I can pretend that I don’t know”) – but now, yet now, he can’t resist that final putdown, looking through her eyes into her mirror; can she really see herself as clearly as he thinks he can? Far more ambiguous and disturbing than its equivalent song on side two, “You Wear It Well” (where he is at least beginning to come to terms with his loss), it’s one of the finest Stewart interpretations, just as long as you can steel yourself to look him straight in his eyes and ask how clear his mind and soul really are.

“Italian Girls” closes up the first side, with its guitar/bass ratatouille riff which springs back throughout the song like a pestering slinky, and Martin Quittenton’s acoustic overlay. The number audibly speeds up. “Aw, take me!” cries Stewart in response to MacLagan’s florid piano rolls. He raunches through some familiar post-Stones tropes (“Stay in seventeen,” “She was tall, thin and tarty/And she drove a Maserati”) and does so hilariously (“Although I must have looked a creep/In my Army surplus jeep,” Oh, nonononoNOOO!!,” “Took me un-DER!”)...but then the song, and its singer, suddenly break down; there is an electric/acoustic guitar interlude, shortly augmented by piano and then by Stewart’s voice. “Get on back there as soon as I can!” he muses. “Take me away!” he shrieks, which then bends down towards a lost whisper; the turnaround in the song from swagger to regret, from muscular self-confidence to an unstable dream world, is truly remarkable. “Wait a minute!” he orders, before Dick Powell’s violin enters the picture, almost subliminally. He whimpers, “She broke my heart” twice (although these are followed by yet another “Whoo!”). The song slows down into mandolin nirvana (Lindisfarne’s Ray Jackson again, uncredited) with Stewart’s shattering triplicate “I miss the girl” and his rolled-away appendix of “so bad.”

With his re-interpretation of Hendrix’s “Angel,” Stewart enters the world of the aqueous on side two; every hint of strut reduced to a confessional. Guitar, organ and glockenspiel feed the melody topline, Speedy Acquaye’s congas creep dramatically into the choruses, and note how Lane’s bass holds and contains the tension over the bridges; but here Stewart is rescued – she comes down from heaven, loves him, promises she’ll be back tomorrow and forever, and sure enough, it happens (one could swim in the rapids of Stewart’s hugely regretful, pre-redemption, third “fly away” in the first chorus).

After a brief Wood acoustic guitar interlude we reach “You Wear It Well.” I have made reserved comments about this song as a single in the past, but, as always, hearing it in its original and intended context brings out its strengths – and its strengths are in its emotional weaknesses. Although it may not have been planned as an intentional sequel to “Maggie May,” that’s how most of the world took it (in Britain, sufficiently so to give Stewart his second UK number one single with the song). Wood’s electric guitar and MacLagan’s organ sond coiled up in the introduction, although both Quittenton’s acoustic and Powell’s violin soon give the song light and space. He’s sitting in Minnesota, it’s a hot afternoon, and he’s writing her a letter. No, don’t get me wrong, “I ain’t begging or losing my head,” although it’s abundantly evident that he’s doing both; he’s thinking about old times and slightly less old fuck-ups; his “A little out of time but I don’t mind” is a nice nod to, and negation of, the sneering of “Out Of Time.” And yet, despite all the do-you-remembers and birthday gowns and tears (those tears, and that’s why he’s not there, anymore), there’s a hurt in the head here, encapsulated by the offbeat drums and seemingly separately pitched organ, bass and voice which we get just before Powell’s solo. “It’s been hard to carry on,” he confesses. Waller’s drums, hammering into his “’Cos I AIN’T! FOR! GETTIN’!,” are like nails on a crucifix. He deprecates his self (“Think of me and try not to laugh”) and reveals unexpected, if belated, tenderness (“You made me feel a millionaire,” “Madame Onassis got nothin’ on you”), but the song breaks down once more; another acoustic/electric guitar break with organ and Stewart’s quatrain of “I love you”s, as though the ink is drying up in his pen, rendered transparent by his tears, followed by a resigned “Oh yeah.” Drums and violin return, and although there is perhaps a bigger subtext to the song – hey, we both wear it well, we both made it out of the sixties alive! – it’s Stewart’s internal, rending sorrow which repeats on our emotions. “After all these years I hope it’s the same address”; the unexpected sadness encased in the realisation that she may never read these words. It fades into a piping uncertainty.

Following that anti-catharsis, the two cover versions which close the record might sound a little offhand, but although Stewart’s “I’d Rather Go Blind” adheres pretty closely to both Etta James and Chicken Shack templates, the performance is different; his empty “...it was over” which ushers in Waller’s funereal drums, his reference to “talking” (how rare in a 1972 number one album!), his low-cast, end-it-all voice. Wood’s guitar comments on his “Cry boy,” and he accents the words “girl” and “child” as though they were polar opposites rather than interchangeables. Doleful horns hover in the middleground, while Stewart’s duopoly of “I was JU-UST!”s sound like a man stripping his soul as though his head were but apple peel.

Finally, Stewart goes back home, to his original inspiration Sam Cooke; his “Twistin’” fades in, glam-stomp style. Wood’s louche guitar solo elicits the thousandth “Whoo!” from the singer, and note how the chorus is held back until the end of the song (although Stewart’s cue to the band is slightly mistimed), as the musical setting and tempo subtly change into foursquare hard rock. Waller’s dustbin drums call up a rabble-rousing climax, before Stewart dives right back into the song and fades out of the record’s thirty-three minutes mirthfully. Dull Moment isn’t as profound a record as Every Picture - there’s no single “Mandolin Wind”-type killer track and the album isn’t as “together” or “coherent” as its predecessor; but maybe that was never its intention. Just a salute, a wave, from Rod to his followers and compatriots; thanks for sticking with us, here’s how it’s going at the moment, how are you all doing, whose round is it anyway? Anything rather than waking up alone on an opulent morning and wondering whether those tears drying against the expensive windowpanes will be sufficient to pretend that there’s not a storm brewing, both outside and inside his mind.
Posted by Marcello Carlin at 18:21