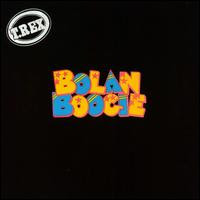 From the sleeve design – the rear cover is a blurred, silvery shot of Marc in action – I wouldn’t expect that the people at Fly Records gave more than a couple of minutes’ attention towards putting this compilation together. Clearly exploring – and exploiting – the suddenly profitable back catalogue at their disposal, Bolan Boogie is nonetheless a very useful primer for the newer Bolan fans of 1972; as well as a handy summation of his hits to date, it also cunningly traces the route Bolan took towards usurping the Beatles (Ringo directed his Born To Boogie movie and nearly made number one with his Bolan pastiche-tribute “Back Off Boogaloo”); the route, to be specific, from acoustic to electric, from wistful to sensual, and how one didn’t necessarily supplant the other.

In fact Bolan Boogie takes off pretty much from where entry #110 left off, albeit cursorily from the Steve Peregrine Took perspective; “She Was Born To Be My Unicorn” appears as the sole representative of Unicorn, the third Tyrannosaurus Rex album and the last with Took; symbolically, Took’s percussion is now a distant bash – it could almost be a drum machine – while Bolan experiments with his voice and his arrangements; his climactic, smacking “high, high, high, high” suggests an increasing sexuality as a didgeridoo, or possibly a processed ‘cello, drones in the middle distance.

The fourth album, A Beard Of Stars, represented here by three tracks, brought both Mickey Finn and electricity on board and the transition is gradual but unmissable. Its single “By The Light Of A Magical Moon,” is the most immediately memorable of this trio, although Bolan is still working, or clawing his way, towards pop; the hooks are there but the mood remains somewhat shambolic (Bolan even presages Bryan Ferry in his vocal here to a minor extent). The profoundest of the three is “Dawn,” an early indication of how well Bolan would be able to carry off the pop ballad; the song is slow, crouched, low, and is a song of love, of yearning, of need, showing a rare humility and vulnerability in the singer; eventually he has to resolve the song into a winsome wordless alphabet with some markedly George Harrison-esque electric guitar commentary, underscored by a remarkable bass improvisation. “Fist Heart” is an energetic midtempo workout, and even here the listener should marvel at Bolan (and producer Tony Visconti)’s arranging genius; so many different things are going on throughout this track, some close up, others in the far distance, yet all are audible and relevant – a thousand variations of invention, and a fine presage of what was about to come.

1970’s T. Rex album – the group’s first to be credited as such – proved to be the crossover. In “Beltane Walk,” all the wonder present in Electric Warrior is apparent and radiant; Bolan’s extremely careful Estuary English pronunciations, the 45° angle between strings, tambourine and bass, the lovely and unexpected major-to-minor-to-Picardy-third chord changes, and a surprisingly simple message: “Gimme little love from God’s heart,” mutating into “Give us little love from your hearts.” The fusion of Chinese Opera strings and Chuck Berry riffing is past inspired, while Bolan’s voice cracks into throaty duality towards song’s end, his guitar, as Lena remarked, snarling “like this massive mosquito,” leading to a pair of crashing feedback clusters at the close. “Jewel” takes the acoustic Tyrannosaurus template, moving it past its unspoken missing link (“Oh Well” by Fleetwood Mac) towards electrified magic and a prediction of Suede in both Bolan’s vocals (Anderson) and guitar (Butler). The third chorus, however, suddenly explodes into a freeform miasma followed by a splenetic Bolan solo; the song ends rather in the manner of late eighties Sonic Youth.

And then there was the album’s single, the breakthrough smash “Ride A White Swan,” the highway back from the perfumed garden towards Route 66; along with Dave Edmunds’ “I Hear You Knocking,” its defiantly unassuming nature – Finn’s tambourine being the only percussion on the record – was immediately arresting, the lyrics silly enough to entrance younger listeners (including myself) and yet telling enough that their accidental profundities are easy to miss (“In the morning you’ll know all you know – oh”). After the posthumous apocalypse that was “Voodoo Chile,” here was a new start, something that even Lennon could understand and grab onto (“Rock and roll I can understand!”). Note the gently, upwardly undulating string line and Bolan’s Prince/Jackson-anticipating gulps, gasps and scats (the latter will be the unshakable core of T Rex’s pop work). As though to underline the continuity, its B-side was a take on “Summertime Blues” arguably more radical than the Who’s on Live At Leeds since Bolan turns it into a raga, with the intermittent entry of a blast furnace drone. The secondary riff toes a fat line between Duane Eddy and Ravi Shankar, while Finn’s hyperactive bongos sound like Tommy Hall’s jug in the Thirteenth Floor Elevators. The whole is so transformatively compelling that you hardly wonder at the prospect of a kid from Hackney calling his Congressman.

Then in the early spring of 1971 came “Hot Love,” their first number one, and it made the likes of Mungo Jerry sound like the 12th century. The song possesses such grace and glide of line; among its many highlights are the Gene Vincent guitar which leaps out like a friendly pink panther in the instrumental break (as well as its divine counterpart, two “OW!”s – why, hello there, Joan Jett! - and one deliciously stretched “OOOOHH!!,” from Marc), the undoubted stimulation of Bolan’s vibrato…and there was nothing tiresomely macho, and everything divinely androgynous, about lyrics such as: “I’m a labourer of love/In my Persian gloves.”

Those “uh-huhs,” those elemental repeats of “Well she’s my woman of gold/And she’s not very old” are so simple and clearly must have evoked what the Elvis of ’56 must have signified, or begun, in our forebears. Much more than “the new Beatles,” T Rex’s triumph was I think to re-engage the duende of that original Elvis. The long, increasingly ecstatic outro, which lasts nearly as long as the “song” itself, in combination with Visconti’s low-bearing ‘cellos and Flo and Eddie’s wailing sopranino backing vocals – and absolutely crucially, the kind timidity and artful generational placement of “I don’t mean to be bold/Ah, but-ah may I hold your hand?” (what a contrast to something like “Baby Jump”) spelled it out: for those of my generation, this was our “Hey Jude,” and really, even more than officially “starting the Seventies,” T Rex were the first pop group my generation could really call “ours”; it was as their sixties selves had been reincarnated, made anew, refined. The Grinderswitch rolling blues bass was there, as were the guitar references to Tony McPhee of the Groundhogs – but this was not a browning artefact of a recent past. It was a maxi-single, and both of its B-sides are also present here; the daft “Woodland Rock” motorvates like old school fifties bop until Bolan’s lead guitar starts chopping into the scenery like a shark for its solo. Strings do not enter until the end, and despite the “Don’t Be Cruel” quotes, there is still a curious detachment in the group’s performance. “The King Of The Mountain Cometh” plays like the last remnant of the extinct Tyrannosaurus, being largely acoustic and driven by Bolan’s organic, universal sigh-gasp mongrelisation at the end of each chorus, but Visconti is hard at work, too; the strings work up towards a high-pitched atonal screech and numerous other elements – didgeridoo, Jew’s harp, studio chatter – stumble in and out of the mix over the song’s endlessly repeated riff before shuffling into its station, startlingly in the manner of Kraftwerk’s “Trans-Europe Express.”

There is no need to reiterate what I wrote about “Get It On” or “Jeepster” in my discussion of Electric Warrior except that here they represent the marvellous culmination of everything towards which Bolan had been working; completely assured, confident and sexy, sounding like little else in the 1971 charts. But there is an urgent need to write about “Raw Ramp,” the five-minute-plus B-side of “Get It On,” and the great lost T Rex track, which opens side two of Bolan Boogie to such astonishing effect. It begins as a stately ballad, very Lennon in its mood. Then, after a meaningful pause, it rocks up and turns practically Beefheartian in its smouldering strut (“Baby, your mouth is like a ghost”), transmogrifying freely towards its subject from “baby” to “woman” and back again (“I’m just crazy ‘bout your breasts!”). “You think you’re a champ,” snarls Bolan,” but you ain’t nothin’ but a RAW RAMP!” Both lead and backing vocals rise and fall like waves of something that is not water; even by Bolan’s own exceptional standards of sensuality, this busts open a few stubbornly closed doors. Bolan breaks into impure vocal abstraction before a second pause ensues – leading to a virtual replica (musically) of the introduction to “Get It On,” although, if the words are anything to go by, the story is that of Bobby Goldsboro’s “Summer (The First Time).” “I got on my knees and begged to the sun/And knew that my manhood had begun,” confesses Bolan before roaring “Electric boogie COME ON!” Fulfilled and complete, he sings, “Embrace your brother/Dance in the mud/Like a Palomino stud!” and the fadeout is exultant, triumphant and – yes – consummated. Record company cash-in or not, Bolan Boogie is an exhilarating listen, and yet, Various Artists compilations aside, marks the point where TPL takes its leave of Marc and T Rex; despite supposed six-figure advance orders, The Slider, the next T Rex album proper (and a severely underrated one), only peaked at #4, and the gentle downward incline of Bolan’s career began as his contemporaries not only caught up with him but also (as this tale will demonstrate when it reaches 1973) drastically outpaced and outran him. At the time of his death in 1977 he was on the verge of a major punk-inspired comeback, and one can only speculate how he would have fared in the age of New Pop and beyond. But, for now – and for many of his fans, for some considerable time thereafter – he had all the answers.
Posted by Marcello Carlin at 18:25