The SEEKERS: The Best Of The Seekers 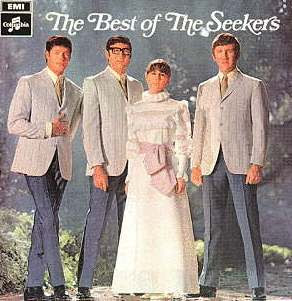 “There’s a New World somewhere they call the Promised Land,” they sing at the beginning of the record and therein lay the attraction; a jaunty, sunny, optimistic jangle of a better future in another country, the same gilded smile we saw in 1962 in such records as “Wonderful Land” and “I Remember You.”

As far as Australia in the fifties and sixties was concerned, however, most of the travelling traffic appeared to be coming in our direction; prominent new arrivals in Britain over that period included Germaine Greer, Robert Hughes, Barry Humphries and Clive James, and musical re-pats included Frank Ifield (originally from Coventry) and the Bee Gees (from the Isle of Man via Manchester). In addition, the prospect of a new, happier land wasn’t quite reflected in the reality; at the beginning of the sixties the White Australian Policy, restricting non-white immigration into the country, was still on the statute books. The Aborigines were not granted the right to vote until 1967, and in that same year the Australian Prime Minister Harold Holt vanished without trace from a beach, almost a decade ahead of Reginald Perrin. And it is extremely crucial to remember that Australia sent conscripts to Vietnam.

All of this is well worth bearing in mind when listening to these dozen songs from the first Australian act – and, technically speaking, the first folk act - to appear in this tale, all of which seem to be about escape in one form or another. 1965’s “I’ll Never Find Another You” was their first hit single, and also their first UK number one, and sets the template pretty readily; boisterous, bustling acoustic guitars supported by Athol Guy’s sturdy double bass and some decorous hand percussion, while singer Judith Durham leads a seamless four-part harmony of voices, effortlessly stalwart and uplifting; an augmented Antipodean Peter, Paul and Mary. Even so, this declaration of love is primarily concerned with the fear of losing the singer’s “guide” and the presumptive prospect of walking “through the storm.”

The follow-up, “A World Of Our Own,” continues in the same vein, though slightly faster with a strangely jolly Highland lilt to its guitar lines, and too anticipates a new world, but the precise opposite of the expansive land “I’ll Never Find” promised; now it’s all about closing the door, shutting out the actual world (“Just leave us alone,” “That no one else can share”). Here Durham’s authoritative. penetrating voice verges on the glacial, a defensive mechanism fearful of wanton destruction.

Escape to the outer world, refuge to the inner self; all options were explored by the Seekers. Two early cuts, “We Shall Not Be Moved” and “Open Up Them Pearly Gates,” both contain bravura performances by Durham, clearly stretching back to Mahalia Jackson in terms of influence – she had been a singer on the Melbourne trad jazz scene before joining the Seekers – and which shriek exuberance at the prospect of exiting this life. “Well, I’m on my way to heaven,” she smiles on “We Shall Not Be Moved,” while “Pearly Gates” is self-explanatory; compare and contrast with the use of “We Shall Overcome” on Charlie Haden’s contemporaneous Liberation Music Orchestra album – on the deliberately cataclysmic “Circus ‘68/’69” (the record’s “Revolution 9”; see also, for the British revolutionary perspective, the “Conflict” climax of Westbrook’s Marching Song), a literal recreation of the Chicago Democratic Convention riots, Carla Bley’s imperious yet stately organ thunders out the tune amidst the chaos, and after the debris has cleared, the album closes with Roswell Rudd’s weary but defiant straight reading of the tune. We’re too busy fighting on Earth to go to heaven just yet. But the Seekers – perhaps echoing the anti-clericism of their Quaker-presaging seventeenth century namesakes – just want to get the hell out of here (in both senses, if one capitalises that “hell”).

But there are other unexpected collaborators at work here. “Someday One Day” is a very early cover of a Paul Simon song (Seekers guitarist Bruce Woodley subsequently co-wrote the song “Cloudy” on Parsley, Sage, Rosemary And Thyme) and a very good one too; though still relatively naïve lyrically, Simon’s trademark compositional tropes (the three-step descending melody/rhythm staircase at half speed against a bustling rhythm, for instance) are already well in evidence. “Morningtown Ride,” a huge hit over Christmas 1966, was written by Malvina Reynolds, the composer of “Little Boxes,” and despite the midtempo “Puffing Billy” canter of the tune (with onomatopoeic strings echoing both the train whistle and the fireman’s bell) there is a degree of unrest about the song’s tale of children, perhaps hidden away, being taken to an unspecified (“Somewhere there is sunshine”), faraway (but hopefully better) destination, a moonlight fleeing (“Somewhere there is day”) from unknown pursuers.

“I’ll Never Find” makes mention of the unimportance of money and material things when compared to complete love, and “When Will The Good Apples Fall” expands the premise slightly; we are asked to empathise with Durham’s rich girl who has everything except the one thing that money can buy; it was a hit just a few months before “She’s Leaving Home” was released.

As if to underline another important connection, however, we are also given the Seekers’ version of “Island Of Dreams,” the song Tom Springfield originally wrote and produced for the Seekers’ direct antecedents, the Springfields; six months on the UK chart through 1962, and the inevitable comparison with the female third of that particular trio comes through. Indeed, Durham generally is scarcely that far away, in either tone or timbre, from Dusty, but it is equally clear that Dusty moved as far away from the world of “Island Of Dreams” as possible; the outstanding British female singer of the sixties – and perhaps that “of the sixties” codicil is not needed – whose direct absence from this tale is a source of profound regret to this writer, had by now recorded Dusty In Memphis (to an indifferent British audience; “Son Of A Preacher Man” scored in the singles chart but the album did not trouble the scorers); hers was an encyclopaedia of a voice, capable of expressing every known emotion and most of the unknown ones, and I never quite escape from the impression that the Seekers is how Dusty might have ended up if she’d remained on the Springfields trail; bold and unmistakeable still, but lacking a certain and key expressive outlet. Once more, the song is about escape – it begins with the singer wandering the streets trying to forget her former lover, yearning to return to him, “far, far away from the mad, rushing crowd” – but its furtively emphatic jauntiness (the Seekers’ guitars were extremely close-miked and their collective percussive impact is quite striking) temporarily diverts the listener’s attention from what is being sung.

When the Seekers slowed down, however, they were perhaps more affecting. “Walk With Me” might be the best moment on the album; a slow, mournful, Springfield-penned waltz bearing a clear melodic and arrangemental debt to John Barry, Durham sings very touchingly, indeed prays, for the song is an extended prayer to be loved (“Take my hand, don’t desert me now/Please don’t hurt me now” she almost weeps); like the Seekers of old, supposedly heretical times, she needs the nowness, the physical presence (“More by far than a guiding star above”), and Harry Robinson’s blanket of strings cushions her towards a tearfully happy ending. Given that Robinson – the man who was once Lord Rockingham – was the man who would shortly be arranging “River Man” for Nick Drake, it is not that farfetched to picture the song as the meeting between Drake and Dusty which never, but should have, happened.

But at the other end of the record we are presented with perhaps the most bizarre item in the Seekers’ catalogue; “Emerald City,” their barely registering last hit (one week at #50 in December 1967). One is open-mouthed as one gradually realises that they are singing about the Wizard of Oz to the tune of Beethoven’s “Ode To Joy” (complete with a slightly detached children’s choir) and, moreover, singing lines such as “Wizards will give us lemonade” in a manner which suggests more than mere analogy. It is scarcely a surprise to find that the song’s co-author (with the other Seekers guitarist Keith Potger) is Kim Fowley, one of the half-visible but absolutely key leylines which runs through the spine of sixties (and to a degree seventies) pop; and so the circle of escape is complete – they have sung about escaping to places that possibly don’t exist, and even escaping by means of death. But “Emerald City” plays like a Light Programme variant on “White Rabbit” and that in turn draws another comparison – Durham, in both appearance and voice, is astonishingly close to Grace Slick, and it is perhaps not idealistic projection to presume that this is how, once, Jefferson Airplane might have sounded had the Great Society chosen a different tack.

The album closes with the only song not in chronological order, and their only major American hit, “Georgy Girl,” co-written by Springfield and Jim Dale, was the title tune of a theoretically promising movie made dreary by James Mason and the plot’s subsequent degeneration into a rerun of Lolita, but the song’s accusatory brightness cuts with undiminished sharpness, as sharp as the acerbic whistling/acoustic guitar unisons of its hook; a plea to the girl to stop living a fantasy, to get off the shelf, to stop being “dowdy,” and to radicalise – a slight pause and then a winking “a little bit” (well, this was still Britain). But its message is the same as that of “Dear Prudence” – won’t you come out and play? And maybe that’s the key to the relevance of the Seekers and this record as its decade stumbled to a close; we knew that something was coming to an end, wasn’t quite sure what was going to replace it, perceived that we might have to improvise a replacement. Whatever was coming, though, we had to make preparations to get out of the sixties, escape from them; and so “The Carnival Is Over,” the Seekers’ biggest UK hit – almost a million and a half copies sold as a single – returns three-and-a-half years later to wind down the proceedings, seal up the party; based on an old Russian folk tune, Tom Springfield (and especially Judith Durham’s startling vocal) already sees too clearly where the whole thing is heading, and as a pop record it remains an epic number one and possibly even a prototype power ballad – it is the Seekers’ most “structured” single and its ramifications (Pierrot and Columbine being two stock mime characters, short-term love – or fling – exposed as a façade, a transitory passing; also immortalised in paint by Picasso in 1900) were clearly not lost on the eight-year-old Melbourne boy Nick Cave, who a generation later – along with a retitled reading of Tom Jones’ “Weeping Annaleah” – would give the song an extremely dignified (if incontrovertibly bruised) reading on his Kicking Against The Pricks album. Farewell to the old world and greetings to a potentially uncomfortable new one – get your tools out and start building the exit doors.
Posted by Marcello Carlin at 13:36