The ROLLING STONES: The Rolling Stones No 2 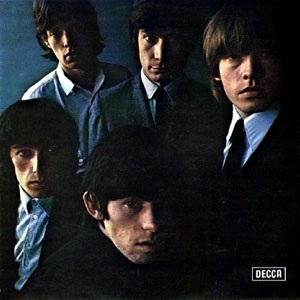 “Well, my groobies, what about Richmond ? With its grass green and hippy scene from which the Stones untaned…”

Looking at TW9 from that perspective – the endlessly rolling lushness of Richmond Park, the easy purchase to neighbouring Bushy Park and Hampton Court, the ideal of Arcadia – rather than from the workaday suburban bus route viewpoint it is easy to see why newness could emerge from its glistened woods in more than one form. I can only say that, as with Virginia Woolf, five minutes in this golden mean make me thirsty for the grey city; but more than one Rolling Stone still keeps a house in Richmond , so it’s no good applying Bloomsbury or Dennistoun principles here.

Still, it’s hard to listen to the second Stones album and not think of Lena ’s mythical Anne Boleyn Secondary School Battle Of The Bands Semi-Final. In David Bailey’s cover shot they appear more apprehensive than menacing (and two of them are staring with some dread at something unspecified to the right of the camera) and their trainee businesslike remote approach streaks through to the back cover shots, where they appear to be doing their best to ignore the camera as much as possible (except for a dubious-looking Watts). And while Oldham’s sleevenote, with its cheerful, systematic pilfering of A Clockwork Orange, may seem to represent a decisive break from the likes of Derek Johnson and Tony Barrow – including the famous blind man-distressing parenthesis – he still manages to fit in a reference to “groupdom” in between curiously Lytton Strachey-esque shaggy dog stories about the wit and wisdom of Keith Richards and sundry Boswellesque jaunts. Nonetheless this is certainly the first album in the tale to mention the concept of the hippy (see also “Their music is Berry-chuck and all the Chicago hippies”) even though the promise of the ultimate answer to Wagner, Stravinsky “and Paramour” is not quite fulfilled by the record’s contents.

The Rolling Stones No 2 is currently not an easy record to find or collate; in terms of CD availability, its twelve tracks are currently divided between four different albums, and of these the version of “Everybody Needs Somebody To Love” – a moderately daring five-minute would-be showstopping album opener - is a good two minutes shorter than the original. As an integral album, however, it feels unfinished, and the blind man may be an apt analogy for this stage in the Stones’ development; here the five are feeling their way around different sorts of pop, rock, soul and blues, sometimes coming up with a collective answer, at other times failing rather badly. It is hard, for instance, to speak up in favour of their “Under The Boardwalk” which, as with several other covers here, is performed in too low a key with inevitable, problematic vocal consequences; despite a heavily-miked acoustic guitar solo dashed off by Jones, the football mob chant of backing vocals on the last “boardwalk” of each chorus betrays a misunderstanding of pop. The same problems occur in their reading of Otis Redding’s “Pain In My Heart” where the crucial “Come back” and “Love me” triples and the climactic “baby” at the end of each are groaned in a manner more suitable for Bernie Winters than the Stax studios (though inspire a moderately furious dual guitar roustabout).

With their version of Solomon Burke’s unassailable “Everybody Needs Somebody” it is clear that Jagger is still a boy when set against Burke’s authoritative (but never tyrannical) man. “I’m so glad to be here tonight!” he announces at the beginning as though walking onstage at Blackpool Winter Gardens, and his imprecations to “save the world” are buried a little too distantly in echo to work, either rhetorically or emotionally. The arrangement, however, is inventive; Jones’ and Richards’ rhythmic placements are far more suggestive of Motown and ska than Stax, the gradual build-up is well timed and executed (with the catalyst of Watts ’ cymbals) and Jones’ final agitated comments deserve more space than the premature (even after five minutes and five seconds) fadeout allows them.

Side one thereafter is largely strong. Leiber and Stoller’s near-demonic “Down Home Girl” is handled well as a slow shuffle with each new startling declamation (“I’m-a gonna take you to the burning river and push you in”) answered by Richards’ querulous three note descending wolf whistle figure, varying in intensity and space with each fresh appearance (Jack Nitzsche contributes piano to this track, and one cannot rule out his expert manipulation of space in terms of its production). With Jagger’s equally wolfish harmonica playing, we get yet more early notification of the grip which Dylan was already exerting on British music, and this soon-to-be-overpowering influence is also evident on their reading of Berry’s “You Can’t Catch Me.” Recorded in the Chess Studios in Chicago , and apparently with the composer on hand to yell encouragement throughout, the song bounces defiantly against the trampoline of Jones’ nervy elastic band slide.

“Time Is On My Side” shows that the Stones were rather more capable of addressing Arthur Alexander as peers than the early Beatles; Jones’ opening three note coyote cry descends into a ball and chains rhythm (with Jagger’s tambourine acting as manacle) and along with the two preceding tracks we are reminded of how, among countless others, the young Polly Harvey would have grown up with this music in her blood. Here Jagger’s timing is perfect; the slow one-two approach of “You…came…” splintered apart by a raging bark of “RUNNINBACK!” and supplementary eruptions (“Spendtherestofmylifewithyoubaby!”). Over Jones’ solo Jagger retreats to the back of the studio, shrieking “GO AHEAD! I’m runnin’ outta time!” and the great triplicate climaxes of “TIME! TIME! TIME!” display a mastery at which their “Pain In My Heart” only fumbled to reach.

The side ends, slightly anticlimactically, with two of the record’s three Jagger/Richards compositions. “What A Shame” is chiefly notable for its gambolling guitar intro, periodically interrupted by Jones’ shivering slide, which predates Bolan’s “Hot Love” by some six years. “Grown Up Wrong,” meanwhile, sees them attempting the Howlin’ Wolf template with mixed results; its (surprisingly) stumbling drums and handclaps are out of synchronisation but agreeably rather than offputtingly messy, though the strident mass vocal near track’s end is misplaced and the production echoes seemingly random. In addition, the song audibly runs out of steam about halfway through and the group have to fall back on stock responses to maintain any momentum; still, Jagger’s comments “Growing up too fast, don’t forget about the past” are worth noting.

“Down The Road Apiece,” an old boogie number which was originally a hit for Will Bradley’s band in 1940, was recorded at the same Chess sessions as “You Can’t Catch Me” and finds the band incendiary and inspired. A brisk roadhouse boogie with more than a hint of Elvis about its beaming bounce (though clearly the Stones derived inspiration from Berry’s subsequent reading), the track features scarring guitar breaks from Richards which get immediate responses from Wyman’s vaulting bass, Watts’ ride cymbal (the latter especially during the third break) and Jones’ increasingly dissonant piano. Thereafter, however, the pace slackens; as well as the above misreadings of “Boardwalk” and Otis, we get a surprisingly muted take on Muddy Waters’ “I Can’t Be Satisfied” in which Jagger is more sullen than despondent (and, again, pitched far too low). There is also some misunderstanding between Jones’ and Richards’ lines in the introduction and overall Jones pushes the Hubert Sumlin button a little too often. And yet at the same time the Stones were capable of producing an incandescent version of Wolf’s “Little Red Rooster,” a deserved number one just before Christmas 1964 (it was succeeded for the season by “I Feel Fine”) whose subtle slyness made even the Animals’ “House Of The Rising Sun” seem somewhat jejune.

“Off The Hook” is the record’s third Jagger/Richards number and again offers no indication that anything of the quality of “The Last Time” or “Satisfaction” was just around the corner; to return to Lena’s Anne Boleyn Secondary model for a moment, much of side two resembles an enterprising school band doing their best with material which they cannot really grasp, and “Off The Hook” sees them attempting the girl group formula with considerably less success or mischief than Lennon; an elementary construction driven by a crisp, jangly rhythm, it too runs out of inspiration relatively early and the subsequent padding out to fade is embarrassing.

And yet the Stones’ incipient duende abruptly veers into focus with the closing track, their version of Dale Hawkins’ “Suzie-Q” (and a decisive influence on the younger John Fogerty, in 1965 still leading the Golliwogs), which offers a handclap-strewn punk thrash. The momentum is exciting, the goal achieved and Jones offers a fiercely fuzzed-up guitar solo; but, as with so many of this album’s tracks, it is unceremoniously faded out, and at a mere 1:50 offers only a soupçon of the storm of hip malchicks about to overpower the dirgiest of countenances. When next we meet the Stones in this tale, however, the school stage would have been exchanged for at the very least a greener and more authoritative quadrangle.
Posted by Marcello Carlin at 12:11