The SHADOWS: Out Of The Shadows 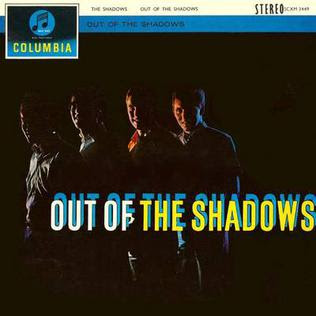 Here is where some Shadows purists got off the bus; by now, Jet Harris and Tony Meehan had both jumped or been pushed out of the Shadows, depending on whose accounts you read and trust, and been replaced by the allegedly more malleable Brian Bennett and Brian “Licorice” Locking on drums and bass respectively. Both Harris and Meehan reckoned that the Shadows lost it immediately thereafter, and setting the brooding thrust of their subsequent run of 1963 duo hits (“Diamonds,” “Applejack”) against the amiable politesse of parallel Shadows hits (“Dance On,” “Foot Tapper”) could theoretically go some way towards demonstrating this.

But the truth, as always, is necessarily more complicated. True, the Shadows offer on their second album perhaps the politest version of “Bo Diddley” one is ever likely to hear, all Home Counties vowels, a harmonica which owes more to Genevieve than Little Walter, and a shave and a haircut for tuppence out of the High Street barber’s (half day closing on Wednesday). But that has to be set against their strutting reading of “South Of The Border” with Hank stretching out in a bluesy middle section and a bass-led rhythm pattern which owed as much to Ricky Nelson’s version of “Summertime” as Deep Purple’s “Black Night” was later to do. Similarly, Ike Isaacs’ “The Rumble” initially resembles a sturdy petition from Tunbridge Wells churchgoers rather than a Thames Estuary Link Wray but is still tough enough by 1962 Britbeat standards.

Much of the credit for this toughness has to go to Brian Bennett, the album’s unexpected star, fresh from Marty Wilde and the Wildcats, who certainly does anything but lay back. “Tales Of A Raggy Tramline” was recorded when Harris was still in the band – indeed, was co-written by Harris - and together Harris and Bennett work up a startling pattern, drum n’ bass whichever way one looks at it, to heighten the otherwise standard Ventures-style workout. Speaking of the Ventures, the Shadows’ take on “Perfidia” is markedly more reflective, and set to a tango tempo (their big hit single of this period was, fittingly, “Guitar Tango”) which somehow turns into a tearoom cha-cha (complete with a curious “OOOOOOOHHHHHHHHH!!!” collective vocal eyebrow as though locked overnight in the gents’ toilets at Victoria Coach Station) but still displays some remarkably inventive exchanges between guitars and Bennett’s carefully patient tom-toms. Best of all, perhaps, is “Little ‘B’,” Bennett’s big feature, a cursory fast-paced rocker which slowly rises to a tumultuous boil over five minutes as Bennett’s solo, again accenting on the tom-toms and accompanied by occasional ooh-yah whoops, demonstrates dynamics that are extremely similar to some we shall hear at the opposing end of this decade (and for some while into the next); I expect that some young ears in Birmingham in particular were already perking up and taking aural notes. And then, completely unexpectedly, halfway through Bennett’s solo, extra bubbling percussion is added and we are suddenly encountered with the father of “Pump Up The Volume.”

Elsewhere, “1861” has a decidedly martial feel to it (a Civil War marching pattern in particular) but then cruises and plucks along like a cheerier variant on the “High Noon” theme; “Kinda Cool” features Hank on rebounding Cramer piano once again; and “Some Are Lonely” is an extremely rare example of a composition by the group's employer, Cliff Richard – as with much of the rest of the album (and other number one albums of this period) there is a decided Latin feel to its tempo and pace (complete with decorative castanets) but it’s not bad at all. There are two vocal harmony numbers; “Are They All Like You?” with its rather unsettling leitmotif of “Ring-a-ding-a-ding” is an Everlys variant, while “The Bandit” – adapted by “South Of The Border” composers Jimmy Kennedy and Michael Carr from a melody by, of all people, Milton Nascimento – is a solemn Kingston Trio-style lament, the solemnity of which belies its relatively trite lyrics (“Olé, I am a bandit,” “Blue Brazilian sky” – although the latter points forward, both lyrically and aurally, to Chris Isaak’s “Blue Spanish Sky”). The stentorian delivery of expressions such as “Shoot to kill” looks forward, not just to the Byrds, but even unto “Cortez The Killer.”

That last comparison is not farfetched; Neil Young was by this time in his last year at high school and it is impossible in particular to listen to this album’s dreamy (and, yes, rather shadowy) ballads without imagining the young Neil practising along; “Spring Is Nearly Here,” despite Norrie Paramor’s intrusive Ovaltine strings, floats as benignly as the pumpkin papa of all harvest moons; while “Cosy” is my own favourite of these tracks – I note the similarity of Hank’s slowly descending guitar motif to “Bend It” by Dave Dee & Co. but the limpid lanterns of dreaming tremolo arms as warm as those of Morpheus and the evening terrains of subtle rhythm progress in different dimensions thereafter; I see the forebears of “Albatross” and even, in places, the Durutti Column – a patient proceed towards eventual end horizons, a blue skyway of airy purchase, a land more wonderful than even 1962 might have thought possible.
Posted by Marcello Carlin at 12:47