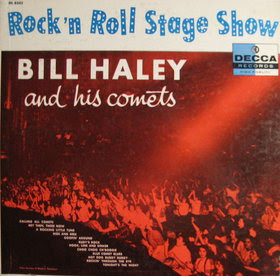 Keen students of the Guinness chart books will know that Bill Haley’s British chart career appears to come to a sudden and abrupt halt in early 1957, after a year of near-total dominance. There are reasons for this; February 1957 was when the Comets came to tour Britain for the first time, and although Haley was mobbed by thousands at Waterloo Station and the requisite riots broke out at several high profile venues, people were looking at him close up and beginning to have their doubts. These doubts had nothing to do with what Haley was but everything to do with what, or who, he wasn’t; specifically, he wasn’t Elvis. He was not lean, he sweated quite a lot, he was in his mid-thirties, a decade or more on the insurgents who flooded the floodgates which he had opened, he was a little too approachable and not particularly sexy.

None of this was fair on Haley, of course, but I suspect that rock ‘n’ roll fans had already settled him as a John the Baptist figure in their minds and were prepared to bow respectfully but move on pretty quickly. Records and films were one thing, but at first hand the Comets did not appear to be capable of igniting long-lasting fires. In the meantime Elvis had broken through, and Little Richard, Chuck Berry, Jerry Lee and others would soon follow or had already followed; Haley had lit the fuse but the results of the explosion swiftly exceeded him.

“Rock Around The Clock” still seems the most difficult pop record about which to write meaningfully, especially if you weren’t there at the time to witness the slow-burning combustion that it started. Watch Blackboard Jungle now and it looks like the ultimate right wing denunciation of pesky kids, irksome feral youths who will not leave well-meaning pullovers and their Bix Beiderbecke 78s in peace. But most teenagers – if such a term could have been said to have existed in stultifying post-war Britain – who went to see the film at the time, and the subsequent titular cinematic musical cash-in, felt that the smashing was the important thing; to strip down the war-sustained deference, to stop the mourning, to cease making do and mending, to become creators themselves. Or at the very least better consumers, taking what was originally intended as a “novelty foxtrot” and turning it into the king of Trojan horses.

The after-effects of what Haley was seen to start have, I think, blinded most people to the extraordinary group that the Comets actually were. Formerly Bill Haley and the Saddlemen, they started out as a fairly rumbustious Western Swing combo – hence the accordion and steel guitar which survived into their rock incarnation – but when Haley astutely picked up on Jackie Brenston’s 1951 “Rocket 88” and covered it he simultaneously sharpened and muddled the group’s edges by bringing in tenor sax and electric guitars; thus a fusion which predated Elvis, Scotty and Bill by some three years.

Likewise, Rock ‘n’ Roll Stage Show pipped Elvis to become the first rock number one album; its better known predecessor, Rock Around The Clock, sat at number two for a fortnight in September behind Carousel and then Oklahoma! Just as the album ushered in a new beginning of time (as far as albums were concerned), so does it represent something of a sea change for the group. Confusingly, the album was not recorded live, and perhaps even more confusingly bore little audible evidence of Bill Haley; he appears on only four of the album’s 12 tracks – its big hit single “Rockin’ Through The Rye,” peaking at #3 and spending 23 weeks on the list, though its ungainly adaptation of traditional Scots mores (Haley can’t help but make “Campbells” sound like “camels”) already suggested that inspiration was running out; “Hook, Line And Sinker,” a slightly slower and looser 12-bar blues variant on the standard Comets formula; a respectful if unexciting revisit of Louis Jordan’s “Choo Choo Ch’Boogie” (both versions having been produced by Milt Gabler) heightened by an interesting, if brief, roundelay of counterpart between sax and guitar; and, his best performance, “Hot Dog Buddy Buddy” where he finally sounds aroused and excited – “I got legs like a rooster, eyes like a frog,” “14 days, 14 fights, 14 lefts and 14 rights,” a giggling “Could stop now but I don’t think I oughta.”

The idea was clearly to spotlight the notion of the Comets as a group and show off the talents of its other members, and there is also evidence of stylistic diversification; two tracks, “Hey Then, There Now” and “Tonight’s The Night” are close harmony workouts (harmonised by steel guitarist Billy Williamson, guitarist Franny Beecher and bassist Al Rex) which take us right back to the Saddlemen days, and beyond to the time of the Inkspots and Andrews Sisters (“Hey Then, There Now” offers the modestly startling imagery of “I’ll give you the moon for a midnight snack”). “Goofin’ Around,” a intentionally dextrous feature for Beecher ’s lead guitar, verges on bebop as well as subtly demonstrating the Comets’ characteristic “double drums” effect with on the beat drumming counterpointed by slap bass.

In truth Rock ‘n’ Roll Stage Show is an enterprising and good humoured record which if it had been recorded six months ago by long-lost Tennessee musicians unearthed by Ry Cooder would have been heralded as a masterpiece. In 1956 Britain , however, its impact was briefly incendiary. Consider Rudy Pompilli, the album and the Comets’ real hero, and his upper register, one note Morse code reveille which commences the album and the instrumental “Calling All Comets” like a clarion call to revolution; soon the band kicks in and Pompilli’s tenor is slurring, blowing kisses, skiing on Bostic rhetoric above the waves of double rhythm. And Williamson’s steel guitar is doing pretty extraordinary things behind him, gulping like a recalcitrant rubber band, as the key changes for the climax and Pompilli ends with a deliberate “wrong” note, sticking his tongue through the reed and chuckling “fuck you, The Past.”

Even the comparatively minor Glencoe-via-Detroit romp of “Rye” is elevated by the band’s sudden forward/upward surge in the instrumental break; cymbals bashing like tidals against discarded Confederate Generals in Big Sur , the heat becoming more intense (see “Memories” by Public Image Ltd. for an interesting generational bookend), Williamson sliding into abstract patterns as Derek Bailey might have comped them and what sound like proto-synth bleeps (and note the emphatic triple gavel hammers of drums at song's end). Johnny Grande’s accordion feature “Rocking Little Tune” isn’t quite punk Cajun but has a good try, including three false endings. Meanwhile Beecher’s bending notes on the midtempo “Blue Comet Blues” invent Hank Marvin – it is impossible to underestimate the impact this would have had on millions, or at any rate thousands, of ambitious kids at the time, earnestly learning the riffs and solos or just miming to them in the mirror.

The two most forward-looking tracks on the album are “Rudy’s Rock” – also a Top 30 hit as an unscheduled single – in which Pompilli blasts off from a perfunctory (or possibly Rudi-mentary; yes, I know, my office at 9 am sharp etc.) theme statement into orbit; over an extended “Big Noise From Winnetka” dog pound of tom toms and handclaps he does everything, including askew post-Parker whole tone runs, curvaceous Coleman Hawkins swing and the obligatory Illinois Jacquet squeals and honks – and it’s still an arresting and amazing listen. Although maybe Billy Williamson is the record’s real secret hero; his vocal feature on “Hide And Seek” introduces a disquieting roughness and menace into the proceedings; it is grainy where all else is clearcut, virtually a snarl, even a roar; “I spy, kick you in the eye” seems to go against the grain of everything else on the record. Pompilli responds with a deadpan queasy vibrato, like Gene Sedric squaring up against a young Albert Ayler, to no avail – “You can’t hide beneath a four leaf clover,” hisses Williamson, and as the song reaches its call and response crescendo his “Man, I’m READY!” recalls no one so much as Iggy Pop.

But that grain of overthrow rustles like an impatient beetle throughout Rock ‘n’ Roll Stage Show, and as “Hot Dog Buddy Buddy” waves its gladly tattered flag above a meal of a maelstrom of handclaps, saxes and guitar loops the intent of Haley’s “Could stop now but I don’t think I oughta” becomes clearest; take it all down and build this new house in its place. Coming after the acutely and painfully meticulous designs and intertwines of three straight Rodgers and Hammerstein musicals, it comes over like a refreshing bucket, or waterfall, of newly flowing liquid meant to wake the world up from the war and learn to live again. Don’t knock Haley’s rock; it's lasted better than we all thought.
Posted by Marcello Carlin at 13:39