ENIGMA: The Cross Of Changes 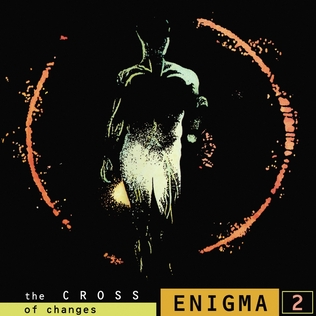 “Do not cast thy glance upon my golden face, for I have iron legs,” said Rumi in the ghazal which he wrote just before his death in December 1273, and it might be a warning not to cast his words as lazy homily, as “Curly M.C.” – one really does not wish to trust somebody going under that pseudonym, which brings to mind the Three Stooges far more readily than it does Sufism – does in the liner note to the second Enigma album.

Actually, The Cross Of Changes could have significantly benefited from some Three Stooges input, or humour or mischief of any kind, as even Emerson, Lake and Palmer had been ready and apt to do. Its complete absence of adventure is barely masked by its conciliatory simulacrum of modernity.

As on its predecessor, but with a surer and, dare I suggest it, more “rockist” approach (in particular respect to its beats), the album finds Michael Cretu politely ransacking an approved past; approved because its samples often stem from very familiar places. Hence “I Love You…I’ll Kill You,” which sounds infinitely more interesting than it actually is, could pass as a below-par Heart or Pat Benatar album track, and I spot references to, not only Black Sabbath’s “The Wizard,” but also two Led Zeppelin samples (“The Battle Of Evermore” and “The Crunge”) and even one from We Can’t Dance (“Fading Lights”).

Likewise, “The Eyes Of Truth” jumble-sales its way through a very recent past, sampling from Achtung Baby, Peter Gabriel’s Us, We Can’t Dance again (“Dreaming While You Sleep”) and even Songs From The Victorious City by Anne Dudley and Jaz Coleman, as well as some Mongolian folk music, but doesn’t really tell us anything other than, isn’t this music for learned bedrooms?

“Age Of Loneliness” was a Morse code-assisted remix of 1993’s “Carly’s Song,” as used on the soundtrack of the rather ridiculous Sharon Stone film Sliver, with more Mongolian mouth music (“Tosonguyn Oroygoor" by Dechinzundui Nadmis, no less). As for “Return To Innocence,” the album’s big hit single and a song considered good enough for R Wayne to interpret, it rather grandiosely samples, not a Red Indian tribe as was commonly assumed at the time, but the “Elders’ Drinking Song,” a chant of the Taiwanese aboriginal ‘Amis people (also known, somewhat less grandiosely, as "Weeding and Paddyfield Song No. 1") as performed by an elderly farming couple, Difang and Igay Duana, as part of the French government’s Maison des Cultures du Monde project in 1988. Cretu sampled the performance (which on record was uncredited) believing that it was in the public domain, but the Duanas argued otherwise and successfully sued for a credit a few years later. It is hard to square this with Cretu’s simplistic thoughts for the day (“Don’t be too proud to be strong,” “Be yourself, don’t hide,” etc.).

“The Dream Of The Dolphin” floats harmlessly for about two-and-a-half minutes and sounds like the intro to a Richard Marx ballad. With “Out Of The Deep,” sung by Cretu himself in the manner of a particularly dorky George Harrison, the rock finally rocks, so to speak, even though the song is basically (if fittingly) “Dear Prudence.”

The whole world as the Enigma Village? This is what differs The Cross Of Changes from the far more generous and outreaching Transglobal Underground; rather than unifying the world, one gets the impression that Cretu’s pick ‘n’ mix prog quilt exists to impose imperial Western attitudes upon what the rest of the world has to offer. It also did not benefit from being contemporaneous with Selected Ambient Works Volume II by Aphex Twin, a long, patient and sometimes threatening record (or records; on CD and cassette it was a double) which triumphantly exists outside of any musical agenda, successfully sets its own laws and parameters for itself, and really has almost – note that “almost” – no real precedent in music at all.

That is, until its final track (unhelpfully titled “Matchsticks” by some sources – the diagrammatic/colour scheme of track listing as outlined on the album’s sleeve suggests some kinship with Anthony Braxton), when the lucid dreaming of all that has come before it – and I have different perspectives on the record now compared to what I wrote about it, spontaneously, a good number of years ago, given my highly direct experiences of lucid dreaming almost three years back – resolves, as, directly, does “The Eyes Of Truth” -  culminates in and is embraced by the return of…Vangelis!

“I have lived on the lip of insanity, wanting to know reasons, knocking on a door. It opens. I’ve been knocking from the inside.” That Rumi had a point, you know.